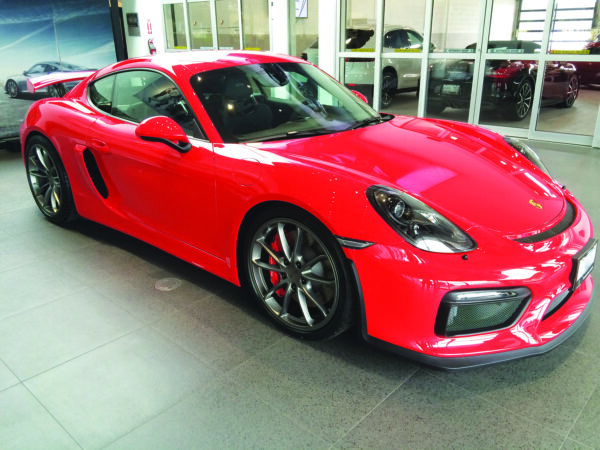 There’s your nice new P-car, now it’s time to carefully break it in.

As you would have read from the September issue of Provinz, I took delivery of my Cayman GT4 two days before UCR’s August social and displayed my car next to the GT3RS from Porsche Cars Canada.

In buying my dream machine, the question of how to properly break-in the car came to mind and my research revealed this interesting article that was posted on Planet-9, July 7/2015 titled:

As the story goes… when the test was completed during a factory visit, a Porsche engineer came over to review the results. I couldn’t resist asking the question that I had been searching to find an answer to for all these years. I asked “why does Porsche feel it is safe for a new engine to run at nearly full throttle in the factory, while the customer must keep the engine speed to no more than 4,000 RPM for a 2,000 mile (3,200 km) break-in period?” I thought that was a logical question and if I do say so myself-well stated!

The engineer replied, “Herr Koop, you do not understand (that I already knew). When we do our engine test, the metals inside the engine never reach the temperatures they would when driven on the street since the test session is fairly short. In other words, the bearings, pistons and cylinders never get a chance to thermally expand to their maximum. Therefore, there is little wear on the moving components. But when you drive a car on the street, the engine parts expand considerably more because of the heat being generated from the engine running for an extended period of time. No matter how tight the tolerances are, there is always a slight amount of expansion in the material. The moving parts can wear quickly if exposed to excessive heat and not always in a uniform way. We also constantly vary the speed and allow the engine to run at both high and low RPM’s”. 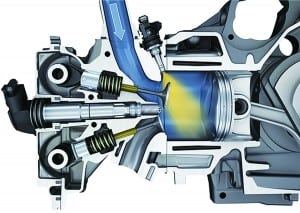 Engine components must be broken in slowly at lower engine speeds and operating temperatures. Illustration courtesy of Porsche AG.

“Porsche wants the engine to break-in slowly, which means it needs to maintain a lower operating temperature (below 4,000 RPM) and to allow all parts to adjust (wearin) within their own thermal expansion parameters. This is also the reason why Porsche wants the owner to vary the RPM throughout the break-in period; therefore the engine doesn’t get used to one operating temperature range”.

“Porsche has been using Mobil 1 Oil since the early 90’s. With its superior lubricating properties, it takes many miles of driving (without getting the engine too hot) before the components actually seat (or break-in). Porsche’s own tests reveal that after 2,000 miles have been driven, all of the moving parts have had a chance to wear into their adjacent surfaces and then an increase in engine RPM is permissible.” I replied, “JA DAS SOUNDS GUT, when you explain it that way, it makes a lot of sense.” I thought to myself: “You Dummkopf, why didn’t you think of that?”

The engineer commented that there were many other moving parts other than the engine that needed break-in as well. Wheel bearings, constant velocity joints, tires, brakes and transmission were just some of the other components that were mentioned.

So breaking it down into layman’s terminology, it all comes down to: higher RPM equates to more heat, which leads to greater expansion. For a new engine, that can mean uneven wear on certain parts if excessive heat is allowed to build up. In Porsche’s opinion, the thermal expansion of different parts and various materials need time to adjust to one another. Porsche’s time frame for that to occur is calculated to be 2,000 miles, with the heat restriction being 4,000 RPM. So simple; who woulda thunk?

Many experienced Porsche engine builders and experts on the Flat-6 engine state that the peak power of a Porsche engine is developed around the 20,000 mile mark. This coincides with the principle of what the Porsche engineer was telling me; “Break it in correctly and the engine will last longer and perform better”.

It only took me 45 years to find out the real answer to this puzzling question. After I returned home, I explained this to my friend. As for our ongoing debate, we now feel a solution to this riddle has finally been reached. Neither one of us had the answer to this complex question totally figured out, but we were on the right path! I am finally able to resolve another one of my life’s unanswered mysteries and now it’s been crossed off the list. I hope this helps explain one of your unanswered questions in the car world as well.

It should also be noted that Subaru recommend a 4000rpm limit for the run in period on the WRX STI (122HP/l Vs GTS 98.5HP/l – 100PS/l) boxer engine. Part of the rationale for rev limiting and rev variation along with engine braking is to better ensure the piston rings are well seated. The ~ 4000rpm “limit” is there as a sensible guide.

The NA manual guide points are very sensible and indeed good specifically in relation to over revving and lugging. I would also add, when you are breaking your engine in monitor the fuel economy, if you do this it is very easy to tell how well your engine is operating e.g the fuel economy is well out of kilter when the engine is new and tight and slowly approaches the manufacturers bench marks as the engine and other working parts “loosen” or rather bed in.

The following tips will be helpful in obtaining optimum performance from your new Porsche. Despite the most modern, high-precision manufacturing methods, the moving parts must still wear in with each other. This wearing-in occurs mainly in the first 2,000 miles (3,000 km).

• Do not run a cold engine at high rpm either in Neutral or in gear. 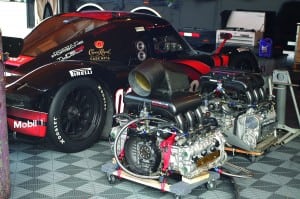 Remember: no racing or track events for the first 2000 Kms on your new car! Unless of course you are running a proper, dyno’d race engine!

• Do not let the engine labour, especially when driving uphill. Shift to the next lower gear in time (use the most favorable rpm range). Never lug the engine in high gear at low speeds. This rule applies at all times, not just during the break-in period.

• Do not participate in motor racing events, sports driving schools, etc. during the first 2,000 miles (3,200 kilometers).

There may be a slight stiffness in the steering, gear-shifting or other controls during the break-in period which will gradually disappear.

Brakes must be properly broken in before they reach peak efficiency and allow for reduced grip with your new tires.

New brake pads and disks have to be ”broken in“, and therefore only attain optimal friction when the car has covered several hundred miles or km. The slightly reduced braking ability must be compensated for by pressing the brake pedal harder. This also applies whenever the brake pads and brake disks are replaced.

New tires do not have maximum traction. They tend to be slippery. Break in new tires by driving at moderate speeds during the first 60 to 120 miles (100 to 200 km). Longer braking distances must be anticipated. 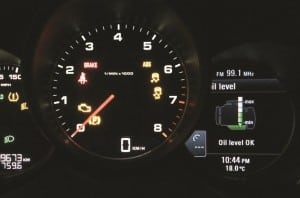 Always keep an eye on your oil level!

During the break-in period oil and fuel consumption may be higher than normal. As always, the rate of oil consumption depends on the quality and viscosity of oil, the speed at which the engine is operated, the climate and road conditions, as well as the amount of dilution and oxidation of the lubricant. Make a habit of checking engine oil with every refueling, add if necessary.