By pcaucr
By Al Forest

In the short time that I have been part of the Upper Canada Region of the Porsche Club, I have come to the realization that every member of the PCA family has a story to tell….…..here is mine. 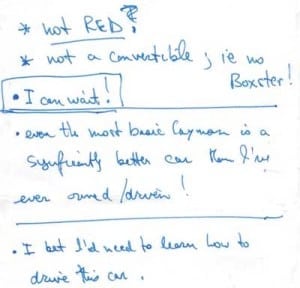 It was late Summer 2009 and I was thinking about getting something special for my upcoming 60th birthday in May 2010. Having missed my mid-life crisis, I figured it was about time to catch up. A distinctive car perhaps and the ones that came to mind were BMW, Audi, maybe a Nissan. I hadn’t delved into the matter much, when I found myself in downtown Toronto one evening.

As I happened to be strolling along Front Street past Downtown Porsche, I saw all the 911 Carreras lined up. This may sound heretical now, but I actually didn’t like the look of the 911. Then, there were a few Boxsters – a fine automobile, but I wasn’t interested in a convertible. However, there in the corner, sat a black car that seemed to jump out at me – what was it ?

The next day I checked out their website and discovered the Cayman. I didn’t know such a vehicle existed and so it hadn’t even been on my radar – but it sure does have beautiful lines. I studied the details and wrote down my comments.

Note the first thing I wrote down – surely red makes too bold a statement and is a magnet for Police.

The idea was to buy a used Cayman at some point in the future, but first I had some questions to be answered, the principal one being: “Can I even fit into this car?” The only way to find out was to go and sit down in one.

At that point, my wife, Jane and I went on a two-week trip to the Maritimes, so the visit to the Porsche dealer was delayed. The other thing that took up my time was cleaning out the garage. For sure, this baby wasn’t going to be left outside.

In mid-October, I dropped by Pfaff Porsche and met Tom Neumann. We spoke for about half an hour about the Cayman and he pretty much convinced me that I did not need to consider the S version. Then we went outside, so that he could show me the car and to sit down in it. 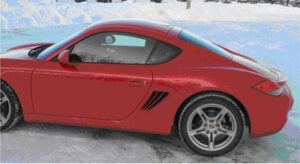 As we went out the door and walked towards the bright new red one sitting just outside, I told him emphatically: “But I don’t want a red one.” He said that we are just looking at the car and not specifically the colour.

He showed off all the features of the vehicle and then I sat down in the driver’s seat. There was plenty of leg and head room. Well, the Cayman passed the first test.

We looked at a couple of others on the lot – black and silver pre-owned vehicles – and then we went back into the office. The next thing to do was to arrange for a test drive.

On my way out, just standing in the Pfaff lot for a few minutes and seeng the Porsches in all their colours and observing a few as they drove in and out of the dealership, I started to understand that these “P” cars make a statement whenever they are on the road, nothwithstanding the colour.

I looked again more closely at the red Cayman – gosh, this was a beautiful car and the red colour was striking. I went home and changed the exclamation point to a question mark.

The test drive was set for early November. Tom asked which car we should take out – the red 2009 or the silver 2007 ? I opted for the used one, since I figured that would likely be my choice.

Here is what the Pfaff web site has to say about Tom Neumann: “Tom’s track-trained test drive style always ends up with smiles from all prospects!”

All I will say about the test drive is this: When we returned to the dealership afterwards, I was grinning from ear-to-ear and shaking from the adrenalin rush. There was no turning back now – and my God, that red Cayman was even more gorgeous than ever.

One of the things that Tom mentioned to me regarding the Cayman is how well designed it is, from an areodynamic perspective. To drive that point home, he showed me the following photograph. 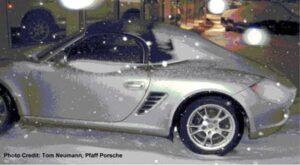 The previous Winter, he had parked his Boxster facing into the wind when a major snow storm hit. Notice the way the snow accumulated on his car. The Cayman’s roofline follows that pattern almost exactly.

By this point, I was pretty much sold on the new red Cayman, as opposed to the pre-owned silver one and I simply couldn’t wait, but first I had to get my wife’s blessing. I asked Tom if he could arrange to leave it out on the lot, the following Sunday, as we were coming to Toronto for a concert. The dealership was closed, but there it was.

To make a long story short, I bought the car the very next afternoon and drove it home to Orillia, a couple of days later.

This purchase was totally out of character for me – the engineer inside of me said this vehicle was too expensive, impractical and totally unjustifiable. But I simply fell in love with it. I didn’t choose it – it chose me. I find it wonderfully ironic that as much as Porsches are “engineered” cars with great technical sophistication, my reaction to the Cayman was, and continues to be, completely emotional.

So now, I am a PFANATIK.

A Game of 30 Questions