By Geoff Britnell of Fiorano Racing 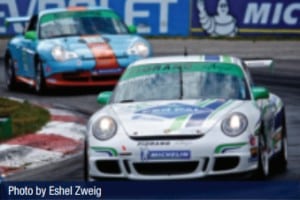 The 2012 IMSA Challenge Cup came to an end in dramatic fashion, as the season wrapped up at Calabogie Mo sport Park on Aug. 20th. Several stunning crashes as well as record-breaking performances highlighted the weekend action.

Speed Merchants would see the most success this weekend as they took home both the Platinum and Gold team and individual titles. JeanFrédéric Laberge started third in platinum but used a strong weekend to take home the series win. 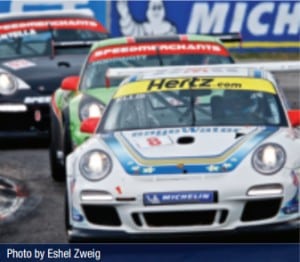 Saturday’s race started with a spectacular crash that would showcase the durability and safety of a Porsche as Jim Hoddinott made contact with Ilker Starck’s front wheel, which sent him somersaulting airborne over a guardrail landing on his roof. Thankfully, Hoddinott was not injured and was able to walk away from the car.

Lebarge avoided any major contact and used a risky pass early in Saturday’s race to push past Alegra Fiorano’s Carlos de Quesada to jump to the lead. He held onto the lead for the rest of the race to finish first ahead of de Quesada and Marco Cirone. 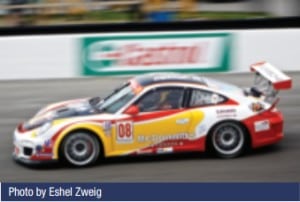 Chris Green was once again lightning quick as he continued his success since he rocketed onto the IMSA Challenge Cup Canada scene winning his third straight race. Bruce Gregory would strengthen his class lead with a second place finish while Rob Maranda would finish in a familiar third place position.

The Silver Cup witnessed the end to a 12-race, two-season win streak for Bob Seitz, as Leho Poldmae overtook the 6th Gear Racing driver to capture his first win of the year. 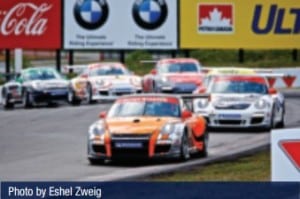 Sunday witnessed similar results to Saturday’s race, as Marcelli led from start to finish in an impressive display of racing.

Lebarge would make sure he would clinch the overall Platinum Championship, as he would use some luck to win the second race of the weekend. De Quesada was able to hold off the future champion, however, after losing his splitter there was little he could do. The Montreal native jumped into first just before a full-course caution was called, which lasted for the rest of the race.

Marco Cirone would also follow and jump ahead of de Quesada before the caution to finish second on Sunday. 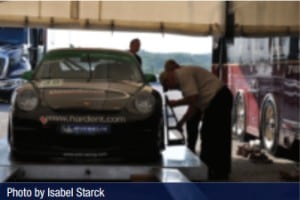 Following behind Lebarge in the overall Platinum standings was Etienne Borgeat in second and Perry Bortolotti in third. Chris Green wrapped up his season by winning his fourth race in as many attempts while setting a track record with a best lap time of 2:05.768. Bruce Gregory was able to remain behind Green to clinch the overall Gold Cup title while Rob Maranda would finish third and clinch second overall.  2011 champion Shaun McKaigue of Fiorano Racing finished third overall for the class.

Both Silver Cup drivers were unable to finish the race as a collision between the two ended their days early. As Seitz exited turn 11, he spun into the path of Poldmae who made heavy contact with the side of his car.

Seitz was brought to a local medical centre for cautionary reasons, however was released later with only minor injuries.

The Silver Cup would finish with Seitz in first, Poldmae in second, followed behind by Gabor Foti in third. Speed Merchants won both team classes while 6th Gear Racing finished first in the Silver Series.

The IMSA racing series may be followed at www.imsaracing.net. The Challenge Cup Canada will return in 2013.

A Birthday Bash for UCR!

In Memory of Leigh Kelk