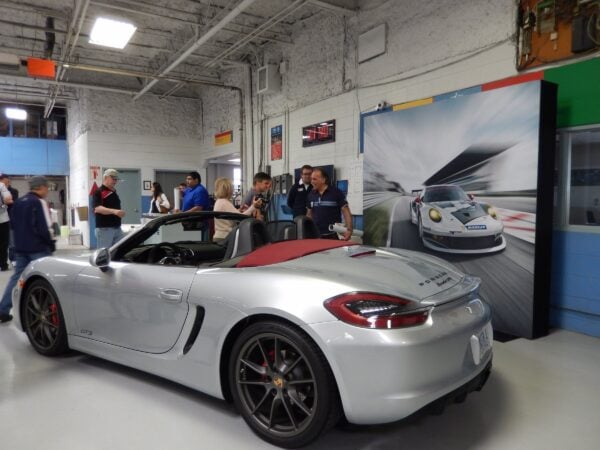 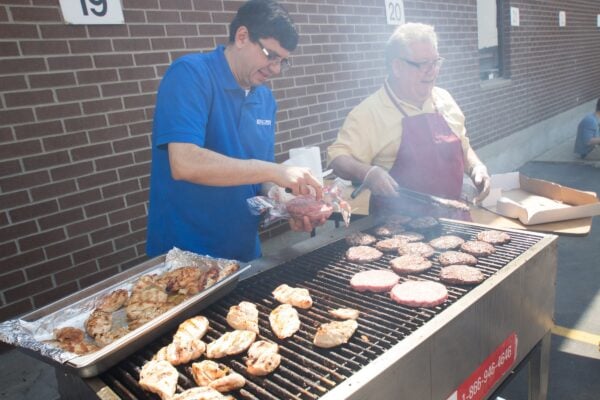 427 Auto Collision, a Porsche Certified Collision Centre, was our gracious host for our 2015 Open House on Sunday May 3rd. With 79,000 sq. ft. of indoor space at Kipling and Evans in Toronto. It was an excellent venue for our Open House because we were able to set up vendors’ displays, parts swap, event chairs’ booths, Show ‘n Shine contest, all under one roof. We had another record attendance of 300+ members and guests at the event.

Matthew Lam (volunteer) and I arrived at the facility at 7:30am where the D’Alessandro brothers (Lorenzo, Frank and John) were already preparing for the event. Between 8:00am and 9:30am, vendors, parts swap members, event chairs and volunteers arrived at the facility to set up their displays. The off-duty police officer arrived at 9:30am and helped direct members to park their Porsches at the rear parking lot of 427 Auto Collision. 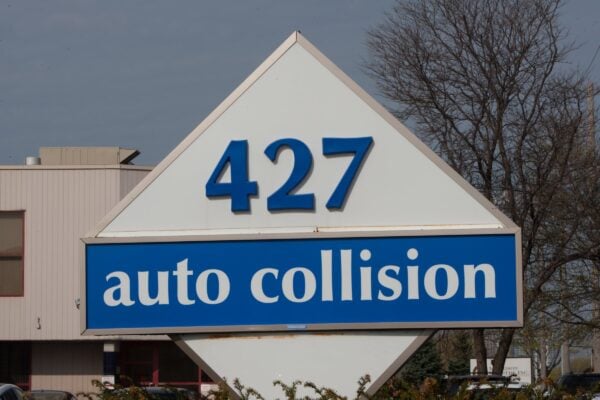 Kye Wankum did a fantastic job organizing this year’s Parts Swap and managed to recruit about 10 swap participants. Sellers and visitors were able to browse through a good selection of Porsche parts and accessories, and found new homes for some they were selling or scored that elusive little part they were missing. This was like a treasure hunt that began even before the doors to the event were officially open! 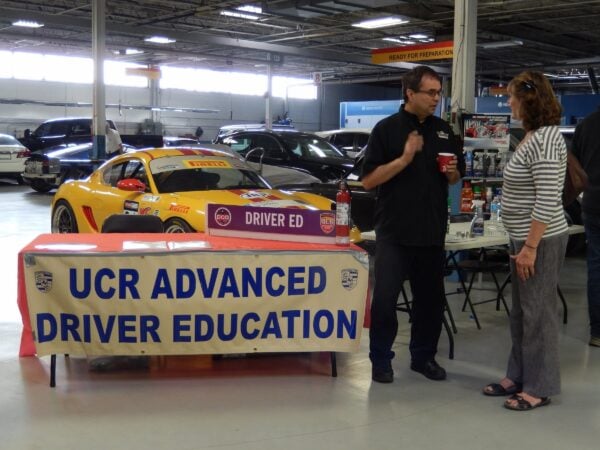 Angie and Mark worked tirelessly at the membership desk and signed up quite a few new members. In fact, PCA announced in early May that UCR had a tremendous growth in membership and we secured the title of the largest region (based on the number of primary members) among 143 regions in North America! On April 30, 2015, UCR had 2,376 primary members (3,562 members including affiliated members). 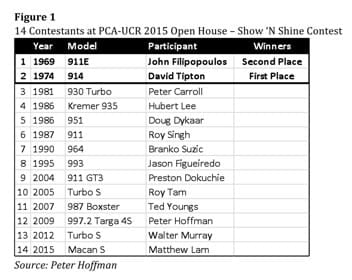 The Show ‘n Shine contest attracted 14 participants (Figure 1) with various Porsche models from 1969 to 2015. Peter Hoffman was very well-organized and squeezed 14 beautiful Porsches into the designated indoor area. Peter managed to obtain over 100 ballots for the cars in the contest and our members picked the two oldest Porsche models as their favorites. 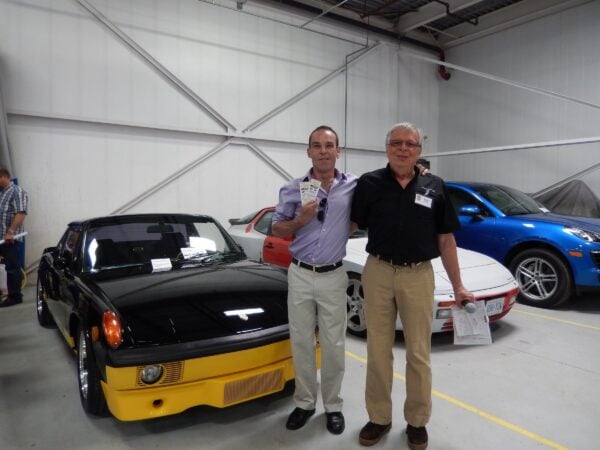 The winner of the contest was David Tipton’s 1974 914. He won a pair of tickets to Victoria Day SpeedFest at CTMP (aka Mosport) on May 15th to 17th. David Tipton and his wife Carrie also became UCR members at the Open House. 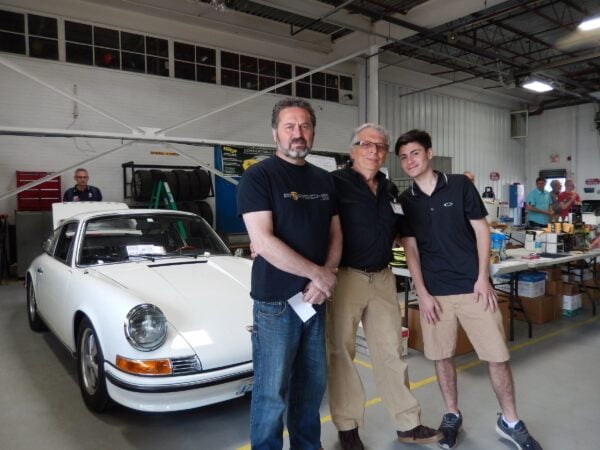 The second place was just behind the winner by one vote and it was John Filipopoulos’ 1969 911E; he won a $50 UCR Goodie Store gift certificate. We also had two rare Porsche cars in the contest and they were: 1) Peter Carroll’s 1981 930 Turbo, which was rumored to be one of the most expensive 930 Turbos ever-built in Toronto, built by veteran Porsche Specialist Jay Lloyds; and 2) Hubert Lee’s 1986 Kremer K2 street version was claimed to be converted originally by Kremer Racing in Germany based on a 1986 930 Turbo, using RSR parts and components.

At 11:30am, the catering staff (hired by 427 Auto Collision) fired up the barbecue and supplied a fantastic lunch feast with gourmet beef and chicken burgers, hot dogs, pasta and salad. Nick D’Alessandro (the son of Lorenzo) assisted us in selling raffle tickets at minimum $5 each to our members and guests, with all proceeds going to the Children’s Wish Foundation. The ticket holders were entitled to the gourmet BBQ lunch and a chance to win $50 UCR Goodie Store gift certificates. We raised over $2,000 for the Children’s Wish Foundation. At 1:30pm, we did the prize draw and gave out $50 UCR Goodie Store gift certificates to 10 lucky winners.

The Open House finished at about 3:00pm. It was a long day for me and all the volunteers but it was a great way to give back to our members.

I would like to thank the D’Alessandro family for hosting our Open House second year in a row and serving us a delicious BBQ lunch. Our success at PCA-UCR 2015 Open House was supported by a group of dedicated volunteers. I would like to thank our 2015 Open House Team: Mark Solomon (consultant), Peter Helston (vendors’ recruitment), Peter Hoffman (Show ‘n Shine), Kye Wankum (Parts Swap), Harry Bhandal (volunteer) and Matthew Lam (volunteer). 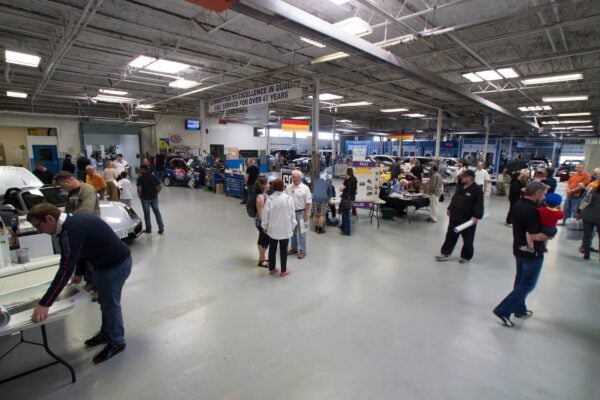 March Social – The Art of Racing in Targa Newfoundland 2014