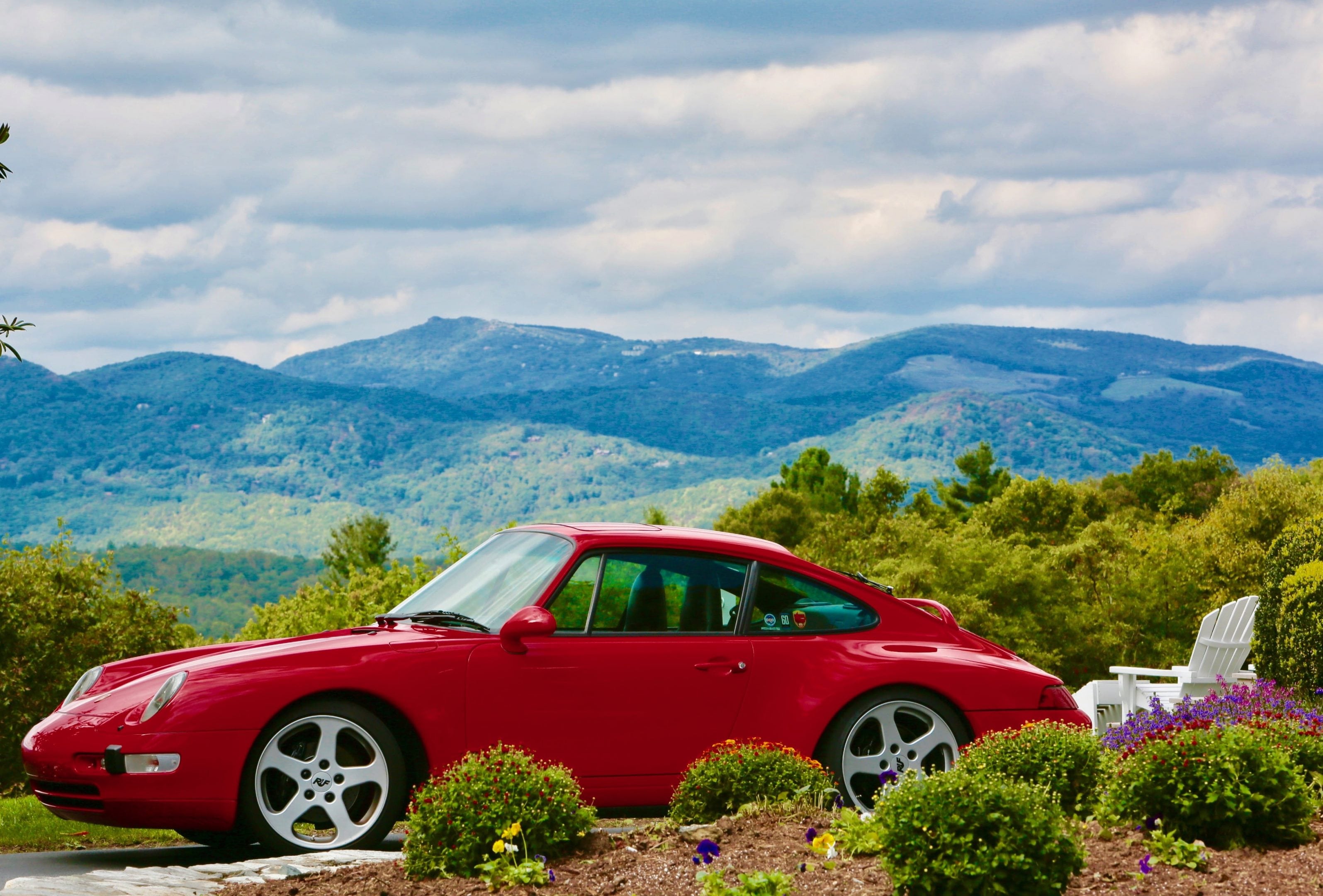 If you love driving your Porsche on curvy, hilly roads through the mountains, and who doesn’t, then you definitely need to go on one of Jason Figueiredo’s tours. Originally planned for a group of 5 Porsches, it was so oversubscribed we ended with two groups of 5 that eventually amalgamated into one, once it was evident they were all ‘spirited’ drivers that could stick together at the same (quick) pace behind Tour Leader Jason’s 993. There was a nice mix of 2-993, 2-997, 2-991 and 4 Boxsters of varying years. Over half the participants had been on one of Jason’s previous tours so that confirms the appeal. The tour included excel­lent hotels and Jason arranged for exclusive Porsche parking at each stopover.

Coming from all over southern Ontario, we met up on Wednesday evening for the first of 6 nights at the Windsor Caesars Casino for a private reception. Early to bed, because we were up and ready to go at 6:00am. Not daunted by the incredible downpour that led to the flooding of much of downtown Windsor, we headed out for a long day, going straight south on I75 from Detroit. The weather cleared up by late morning and we had blue skies and sunshine for the remaining 5 days. The sight of 10 Porsches travelling like a train at 130kph along the interstate certainly drew some looks.

The first day was mostly spent getting down to the mountains of Kentucky with a lunch stop for an incred­ible meal in Cincinnati, but not without our one and only ‘incident’ on the tour. Just 2 exits before the lunch stop I felt the handling go off on our 993 and the familiar sound of a tire going flat. In the fast lane of an interstate with no ‘pull over’ shoulder, I headed for the right lane and was happy to see an exit coming up. As the tire didn’t feel too bad yet I headed for the exit and pulled in at the first driveway at the end of the ramp. Lo and Behold it was a tire store. My 2 mos. old Mi­chelin was ruined by a screw close to the sidewall. After some digging and searching they found a matching tire in town and arranged to pick it up for me. Fortunately, Yoman and Joyce Koo had followed us off the highway to see if we needed help, so we all squeezed into their 2013 911S and headed off for lunch with the others. After lunch we told the others to go ahead, as we didn’t know how long we’d be delayed and they were on a tight schedule to get to the famous Woodford Reserve Distillery for a Bourbon Tour. We returned to the tire store by Uber and the tire was on and ready to go. We continued on to the historic Boone Tavern Hotel in the university town of Berea, KY. The rest of the tour gang arrived shortly after us and we all sat down to another splendid meal together.

Friday morning was another early 6:30am start as we headed off on the 5-hour drive to lunch near Knoxville, Ten­nessee. Jason, having done a lot of research to determine an interesting drive for us led us at a hectic pace through the ‘Devil’s Triangle’. A series of curves and switchbacks up one side of a mountain and down the other. It was an adrenaline rush for the drivers but I’m not so sure most of the passengers felt the same about it.

We were well warned NOT to cross the double yellow line as bikes coming the opposite way are mostly leaning into the curve close to the line.

Little did they know that this was just the warm up for ‘The Tail of the Dragon’ we would be driving in the after­noon. Again, up the mountain and down the other side, but this was a series of 318 curves in 11 miles, many of them switchbacks that kept you on edge the whole time, trying to keep up with the driver in front and not hold up those behind you. We were well warned NOT to cross the double yellow line as bikes coming the opposite way are mostly leaning into the curve close to the line. At the end was a gathering place where everyone stops to catch their breath and buy a souvenir of the experience. There is also lots of entertainment with cars and bikers starting from that point by pulling wheelies and burnouts as they start up the mountain.

Most, especially passengers, felt some relief at a more leisurely pace we took on our way to tonight’s hotel, the Omni Grove Park Inn in Asheville, North Carolina, although Jason’s pace was never sedentary. This hotel was a welcomed surprise, and soon made our passengers forget the white knuckle rides in the mountains. Over 100 years old and visited by many Presidents and dignitaries, its’ architecture was indeed unique. Built into one side of a mountain, the reception area was above all the guest floors that ran down the mountain on the other side. An abundance of very large stone fireplaces was found throughout the various bars and restaurants, most with incredible views of the Blue Ridge Mountains.

Saturday was a day off with no driving. We could enjoy the facilities of the hotel, visit the pic­turesque town of Ashville nearby or take a tour of the famous Biltmore Estate, the largest single family home in the USA, built by the Vanderbilt family in 1895 on 8000 acres of parkland designed by NY Central Park Landscape Architect Fredrick Olmstead.

Sunday we had a later start at 8:15 and drove the Blue Ridge Parkway for a few hours of another curving, swooping two-lane road ending with private lunch at the Westglow Spa, a Relais & Chateaux resort overlooking the mountains.

The afternoon’s drive took us through more mountains to the Omni Homestead Hotel in Hot Springs, Virginia. Another hotel with a famous clientele, built in 1776 it was also on the side of a mountain. We were treated to a tour of the hotel and an interesting talk on its history. Again with breathtaking views of the mountains it also had splendid accommoda­tion and restaurants.

In order to make the most of our stay we all agreed to leave late the next morning so we were off at about 11:30am. We made a rest stop for gas at an historical art deco gas station in a small town that only Jason could find. As this was the last official day of the tour some of our compatriots from Western Ont. went a different route home from here rather than go around Lake Erie from the East end. We all drove together most of the day on what some considered the best day of driving on the tour due to the miles of sweeping curves and hills. Some went directly home while a few of us spent the night at the Seneca Casino near Ellicottville, rather than stretch out an already long day of driving.

We all ended the wonderful trip with happy memories, new friends and an appreciation for touring in a real GT automobile.