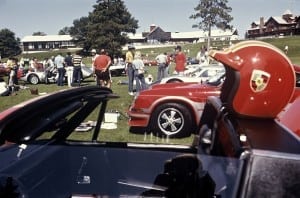 Stuttgart. For six decades, the history of Dr. Ing. h.c. F. Porsche AG, Stuttgart, has been inseparably associated with the worldwide enthusiasm of the Porsche Club scene. 60 years ago, on 26 May 1952, seven passionate Porsche drivers founded the Porsche Club Hohensyburg in Westphalia. According to its articles of association, the common goal of this first club was to “unite all Porsche drivers in friendship and comradeship”. The creation of this first club was the foundation stone for a long and unique success story that has become a global phenomenon.

In the early Fifties, it was still a rarity to encounter a Porsche on the open road. This resulted in a greater sense of solidarity between owners – not just in Germany. The Porsche Clubs’ international success story begins in 1953 with the founding of the Porsche Club Belgium. Two years later a private group of American Porsche customers, who were providing one another with technical support, spawned the Porsche Club of America, which nowadays represents the largest Porsche Club organisation in the world. And in 1961, in Great Britain, enthusiasts of the Zuffenhausen sports car brand founded the Porsche Club Great Britain, which has now developed into the largest Porsche Club organisation in Europe. Today, the 640 officially recognised Porsche Clubs with their approximately 181,000 members from more than 75 countries constitute the world’s largest automotive sector brand club.

The Porsche Clubs live the Porsche brand, seven days a week and 365 days a year. Club members’ high voluntary commitment makes them important brand ambassadors and thus part and parcel of the Porsche brand. That is why the Porsche Museum is honouring the Clubs’ 60th anniversary with a special exhibition. From 26 May to 26 August 2012, the sports car manufacturer will be looking back on six decades replete with exciting club activities. Not only will Club members’ special vehicles be on show but special photographs, documents and small exhibits will also relate their personal stories and experiences.

In addition, all museum visitors will be invited to select the most beautiful exhibit as part of a “Concours d’Elegance”. The choice is between twelve different vehicles, including the twelfth Porsche 356 produced in Zuffenhausen, a Porsche 968 Turbo S and a Porsche 911 Turbo Targa. Dr. Wolfgang Porsche as well will be providing a rare vehicle from his private collection for the special exhibition: a 911 Turbo S (993). Moreover, a 1970 Porsche 914/6 GT will be on show, as will a Porsche 911 S “Club Coupé” that was brought out in a limited edition of 50 units exclusively for American Club members to mark the 50th anniversary of the Porsche Club of America.

The museum shop will be offering a selection of special items for sale: the new volume “60 years of Porsche Clubs” by in-house publisher “Edition Porsche Museum” introduces the reader to the history of the Porsche Clubs in approximately 180 pages. The book acquaints the reader with the most interesting, beautiful and spectacular Club moments. The book is available in German and English for 14.90 euro. Also, the museum shop is offering a metal “grill badge” on the occasion of the Clubs’ 60th anniversary – that can be affixed to the air intake grille on historic Porsche models. The “grill badge” is approximately 95 millimetres in diameter and costs 35.00 euro. An anniversary pin is also available, priced at 5.00 euro.

The Porsche Museum is open Tuesday to Sunday from 9 a.m. to 6 p.m. Admission is eight euro for adults and four euro for concessions. There is free admission for children under the age of 14, accompanied by an adult. Additional information is available online: www.porsche.com/museum.