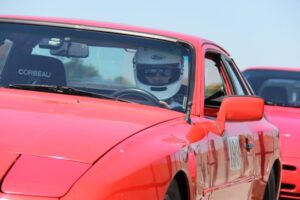 I was fortunate enough to get away during the weekend of April 18th on what had to be the nicest two days of 2015 so far.

My brother, Andy, and I had planned a few weeks earlier to attend “possibly the largest Porsche only swap meet in the world”, their words, not mine. The CENTRAL PA region of the PCA puts the event on every year and this year was held at the Giant Center parking lot, part of Chocolate World in Hershey, Pennsylvania.

It was decided we would venture down there via some mountainous twisty roads in my brother’s 2002 911 Carrera 4S. We had chosen a route that wasn’t necessarily the quickest way there but would be well suited to a Porsche on a sunny day.

We were not disappointed. Pennsylvania is a beautiful part of the USA and we enjoyed the little slice of Americana in many of the small towns we passed through.

One of the highlights of the drive to Hershey for me was to pass through the town of Bradford, Pennsylvania, home of Brad Penn oil. It’s the green stuff that helps keep my 944’s heart pumping. I am a huge fan of this oil and driving right by the factory where it’s made was very cool for me.

On To The Show

We woke up early Saturday morning hoping to get to the swap meet first thing to hopefully score some great deals. We were not disappointed. Within a couple of minutes I had made my first purchase, an A-pillar gauge pod. The seller gave me a great deal and even threw in a brake master cylinder for free. You can’t beat that!

Andy scored a perfect set of used Fabspeed mufflers for his 911 for an unspeakable price; even the Fabspeed guys at the show were amazed! We were like kids in a candy store; it just doesn’t get any better than this if you’re Porsche-obsessed.

After browsing through the show, trying not to spend all my money, we walked over the Concours area. Some amazing cars caught my eye, but being a 944 guy meant I had to find a nice clean one and pester the owner.

We stumbled upon a gorgeous 1983 in Moss green with tan interior. The second owner, a local, said the car had 21,000 miles. It showed. This was one of the nicest, and most original 1983 944s I’d ever seen. It also showcased a couple of dealer options from back in the day. I was lit up! This car was amazing! I should have asked to go for a ride.

So many other inspiring cars were on display. Not one but two Holbert “Super-wide” 944s were for sale. A Karmann Ghia-bodied Boxster was showcased by the shop that built it and we spent 40 minutes talking to the guys who fabbed it. There was a Carrera GT, gorgeous 356s and every make, model and type of 911 you could imagine.

We ran into a fellow originally from Oakville, now living in North Carolina who had a 944S Gulf-liveried track car, as well as a stunning Speed Yellow 993 Turbo. The passion oozed from his pores. We laughed and giggled and ooh’d and ahh’d about the Porsches we own and the Porsches we would love to own. Spending a day looking at Porsches and Porsche parts with people that share my passion and obsession, it just doesn’t get any better than that.

We were on a strict timeline so at 3pm we decided it was time to head home. A different route was planned, but the same empty, winding roads guided us back to Ontario. The 911 was flawless and I was lucky enough to score some seat time. The trip flew by and I realized this was the stuff of dreams. A stunning Porsche, an open road, a tank full of fuel and a sunny afternoon. Best day ever!

The trip to Hershey has certainly re-kindled my passion for Porsches and I realized that I am not alone in my obsession. There are literally thousands of us crazies and we have a place to meet up every year to continue to fuel that passion. Thanks to everybody that made the trip so special. I can’t wait for next year.