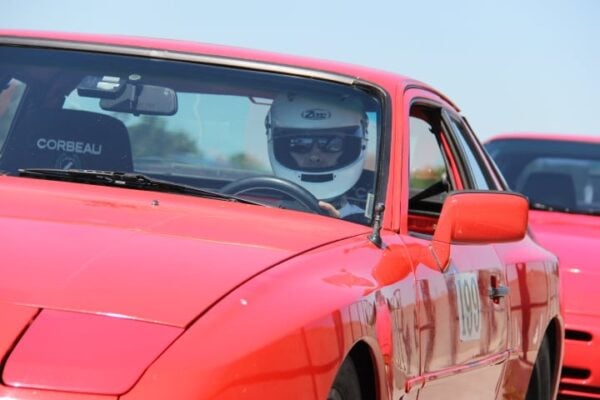 My name is Darren deRoos and I am a 944-aholic. I don’t attend monthly meetings for my addiction, and I don’t have a sponsor to call in the middle of the night when I am pining to drive my 944. I just simply accept my addiction and do everything in my power to keep it from consuming me. My vice is my 1984 944. It has a neat story.

The car was first purchased into our family in 2002 by my brother, Andy. He had called me up saying that he knew a guy, who knew a guy, who was selling a Porsche 944. Andy said it was sitting at a dealership near QEW and Kipling. I knew nothing about these cars other than they looked cool and there were these races on TV in the 80’s featuring Rothman’s sponsored cars with some amazing racing. He told me where the car was located and I figured I’d go have a look. I went and it was love at first sight. The guards red paint, black leather interior, yellow gauges, aftermarket “mesh” wheels. This thing looked like it was going 100 mph while sitting there. “BUY IT,” I screamed in my head. “Money be damned, you must buy this car, Andy (so I can borrow it, of course)”.

So Andy decided to buy it and quickly learned that a cheap Porsche is the most expensive car you’ll ever own. Power steering leaks, engine leaks, demonic headlight motors, overheating issues…the list went on. I’m quite sure that a weaker person, me, would have kicked this neglected 944 to the curb after the first three issues, but not my brother. He seemed to accept the 944 as a challenge, both mechanically and financially, and soldiered on. Each issue was met with a patient, pragmatic approach and tackled, one by one, until his baby was ready for the track.

I would go for rides with him, and sometimes he’d let me drive it. I’d say it was “neat” and “quick” but my

modified Hondas would eat it for lunch. I’d make fun of him, asking when he’d be able to get a “real” Porsche instead of this glorified VW-Audi. All the while, he’d be smiling, continuing to love his 944 and make it better, day by day. He’d tell me about this club he’s in, PCA-UCR, that held “DE” events where he’d have instructors helping him go faster in his 944. He’d say, “I passed a 911.” I’d roll my eyes. Until one day.

I tracked a 1991 Honda CRX. It was my baby. One day I invited my brother to come with me to Shannonville. I won the event we were at outright and at the end of the day, we switched cars. I was finally going to get my chance to see what the Porsche could do at the track. WOW!! Was I surprised. I didn’t want to stop driving it, it was like I was hard-wired to the car. The harder I pushed, the better it got. I felt connected, I felt elated, I felt at home. It was like I’d driven this car for years, it was so well balanced, had great torque, and while not super-fast, was so much fun to blast around the track. I was hooked. I went home and immediately sold my CRX. It was time to look for a 944.

Fortunately, not long after I sold my car, my brother found another 944. A car that was featured in Provinz last year after a lengthy restoration process. It is a stunning car that I love to drive. Since he found another car, he sold me his red 1984. It was now mine. I’ve had it four years now and I’d like to share with you my ups and downs with it. I am currently in the process of supercharging it and turning it into even more of a track monster. I hope you’ll share my journey with me here, whether you’re a 944 fan or not.

My name is Darren deRoos and I am a 944-aholic. And this is my story.

Previous articleOBJECTS OF DESIRE – Sledgehammer
Next articleRacing saved my life