A QUESTION OF INSURANCE- When are you covered for on-track activities?

On June 9th last summer I was participating in an open lapping event organized by JRP Motorsports at Canadian Tire Motorsports Park. This was simi­lar to our own Porsche Club Driver Education events. Last year I had purchased a 2014 Dodge Viper GTS. I had other Vipers in the past and so I wasn’t completely unfamiliar with them. This one had over 600 hp and was Chrysler’s lat­est offering and so I decided that there would be no better place to get a feel for the car than to track it at Mosport. Let me say that I am also a Porsche Club Member as my other car is a 996 Turbo. I have had prior experience at Mosport during driver education events and have participated in other similar lapping days at the track so it was not my first experience at Mosport. My new Viper was insured under a Standard Auto Policy available to all drivers in the province I am told. It had “all perils” coverage combining both col­lision and comprehensive coverages. I had no specific en­dorsement entitling me to use the car on the track although I have learned that no such coverage is necessary.

My morning started rather uneventfully like most track days before it. After a tech inspection and a driver’s meeting I was assigned an instructor and was eager to get started. The morning lap sessions went well. The track conditions were good and the weather was pleasant and sunny. Lap to lap I became more comfortable in the seat of the car. The power and performance capabilities of this vehicle were undeniable. After a short break for lunch I would go out in the afternoon sessions without my instructor. I gained more confidence with each lap under my belt. I would talk myself through my work zones and maintain focus on the task at hand. And then, on what would be the last lap of the day, I would bring my Viper to the crest of the hill at the end of the straightaway approaching Turn 8. I eased off the throttle and a rather unfortunate incident would then occur as I downshifted from 5th gear to 2nd (instead of 4th). I felt the rear end wheels lock; the car went right and slid onto the grass heavily impacting the concrete retaining wall. 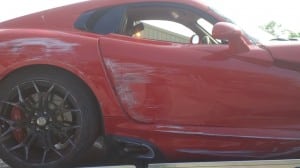 I was shaken but not hurt. No airbags were deployed but the car absorbed the impact. Not a pretty sight I thought to myself as I stood by as a flatbed truck was called to clean up the mess. My car was totalled. I stood there stunned not quite realizing at first that my brand new Viper was lost. I think I was more concerned with getting the track cleared so that my colleagues could resume their track experience, and then it struck me. How would I go about paying for the damage to the car? Would I have to replace it? And would my insurer cover me?

The car would be towed to my local Dodge dealer and the process of getting appraisals and estimates for the damage would begin. I did not purchase the optional depreciation waiver rider on my policy, which in other circumstances would have required my insurer to pay the full replacement cost of the car, as it was less than six months old.

The damage estimates would exceed the value of the vehicle according to my insurer. The car was a write off they would conclude.

I would be asked to provide a sworn statement to my insurer regarding the circumstances of the collision. I told them the truth that I had wreckedit at the track. I provided a Proof of Loss, and then three months would go by without a response to my calls for the insurer to pay the claim. I started to get an uneasy feeling.

I came to learn that my insurer would download data from my vehicle’s event data recorder or black box. Over 200 kilometres per hour, they would tell me, I was going when I lost control of the car. I would tell them in my state­ment that I was not one to be looking at my speedometer trying otherwise to stay focused on the track.

A “race” or “speed test” they would conclude, an illegal use under my policy, according to them. My claim denied.

To make matters worse I would get a letter from a lawyer hired by my insurer telling me that I was required to submit to an Examination Under Oath. This was scheduled for me in September, last fall. I felt unease, I wasn’t quite sure what to expect but I was told that I had to submit to this oral deposition despite having provided them with a statement as they had requested.

I had otherwise complied with all of my obligations un­der my policy, I would later be told. I had given my insurer proper and timely notice of the claim. I had preserved the vehicle in its damaged state. I had not undertaken any unnecessary repairs or removed any physical evidence. What’s worse is that I continued to pay my premiums as I had done in the past for years. Sure, the car was both new and expensive but I began to ask myself, isn’t that what insur­ance is for? And so feeling frustrated I queried, what do I do now? I decided to seek out legal advice.

I had remembered seeing an ad in our monthly Provinz Magazine. Each month when I read the track talk section I couldn’t help but notice the ad for Bergmanis Preyra LLP. Lawyers. I know that Kurt Bergmanis has a reputation for helping injured accident victims, but I decided to call him anyway to ask him about my rights.

Kurt is a Porsche Club Member and track enthusiast himself. He has a number of driver education days under his belt and so I felt assured that he would understand what track use and lapping days were all about. I figured that he could navigate me through this ordeal.

I would meet with him. I would provide him with copies of my Bill of Sale and Proof of Loss. He would request a copy of my statement from the insurer directly. He would arrange to attend with me at the Examination Under Oath, which I have learned that an insurer can do at a reasonable time and place, where they have questions surrounding the circumstances of the loss.

Kurt knew that my insurance company was obligated to cover the reasonable value of my vehicle and he told me so in no uncertain terms. He prepared me for the questions that I would face at my deposition. He calmed my nerves and I knew what to expect.

He attended the meeting with me and all in all, the day went uneventfully.

Again, the lawyer for the insurer pressed me about lap times. I couldn’t tell him, I told him as I had no stopwatch or other timing device in my car. He suggested to me that I was trying to increase my speed from one lap over the next.I agreed to the extent that I was trying to improve my line and my smoothness behind the wheel. He would suggest that I was racing either others or myself on the track. No, I would insist, passing can only be had in certain zones and the vehicle ahead must wave you past.

There was no evidence, my lawyer assured me, that I was involved in a time trial or speed test.

Following my Examination Under Oath, still, there would be no response or a cheque from my insurer.

At long last I would receive a certified appraisal valu­ing my vehicle at significantly less than what I felt was fair value. We in turn would have the vehicle appraised ourselves. I had known that prices on all new Vipers had recently been lowered by $15,000.00 by Chrysler.

My insurer would stand by their denial of the claim. Still a concern that I may have been racing or involved in a speed trial they would say.

And so, with my lawyer’s advice, the decision would be made to sue my insurer for the position that they had taken in denying my claim. A Statement of Claim was issued and served.

Following service of the claim, I would get a call from my lawyer only to be informed that a new offer had been tabled to settle my claim. I can tell you that at the end of the day, with the Dodge dealer credit that I had obtained in purchasing my 2014 Viper I had enough with the offer to go out and purchase a brand new car. To date I haven’t made the decision to buy a new Viper. I am thinking that it might be time to upgrade my 911.

And so, how do I express my gratitude to our fellow Porsche Club Member, Kurt Bergmanis for helping me? Write a letter for Provinz Magazine he said and tell your fellow members about your experience and the insurance lesson that you learned. I agreed and so here it is. I do want to thank Kurt Bergmanis for his time and his advice throughout.