A Visit to The REVS Institute

Talk about finding the holy grail of cars in Florida… The Collier Collection at the REVS Institute is breathtaking. REVS, which opened to the pub­lic in March of 2014, attracts a world-wide audience of car enthusiasts. Each of the one hundred vehicles was added to this collection because of its rarity and histori­cal significance. The cars, dating from 1896 to 1995, are maintained in peak operational condition and are still driven on the roadway and even compete on racetracks across the United States and Europe.

REVS was founded in 2009 by Miles Collier of Naples, Florida. Born into an American automotive dynasty, Miles spent the better part of a decade racing in an E-Production Porsche Speedster. His mission today is to provide the automobile with a platform that demonstrates the sheer power and influence that this great, modern invention has profoundly contributed to our culture and history.

The Collection is a window into the world of motor racing. You can stroll through thirty years of unparalleled innovation produced by Porsche, one of the most revered automakers of our time. You can stand toe to tire with the very first Porsche 550-1 race car!

You can see Bob Holbert’s 1961 Porsche RS-61L Spyder, wearing number 14 on display. This is the last of the cars that Bob Holbert drove to his SCCA E Sports Racing Championships in 1961 and 1962, as well as the newly-created U.S. Road Racing Championship in 1963. Holbert’s success was no big surprise. He was America’s top Porsche driver. But this Porsche was a big surprise for Bob. After crashing his first RS-61 at Mosport, he ordered a new chassis/body. When it arrived it was four inches longer in the engine bay area to accommodate Porsche’s latest race engine. Concurrent with development of the 1.5-litre eight-cylinder engine for Formula 1, Porsche developed a two-litre sports-racing version to try in lieu of the venerable Fuhrmann four-cam. For gearheads, all the car stats and stories about each Porsche on display are available at the Museum. 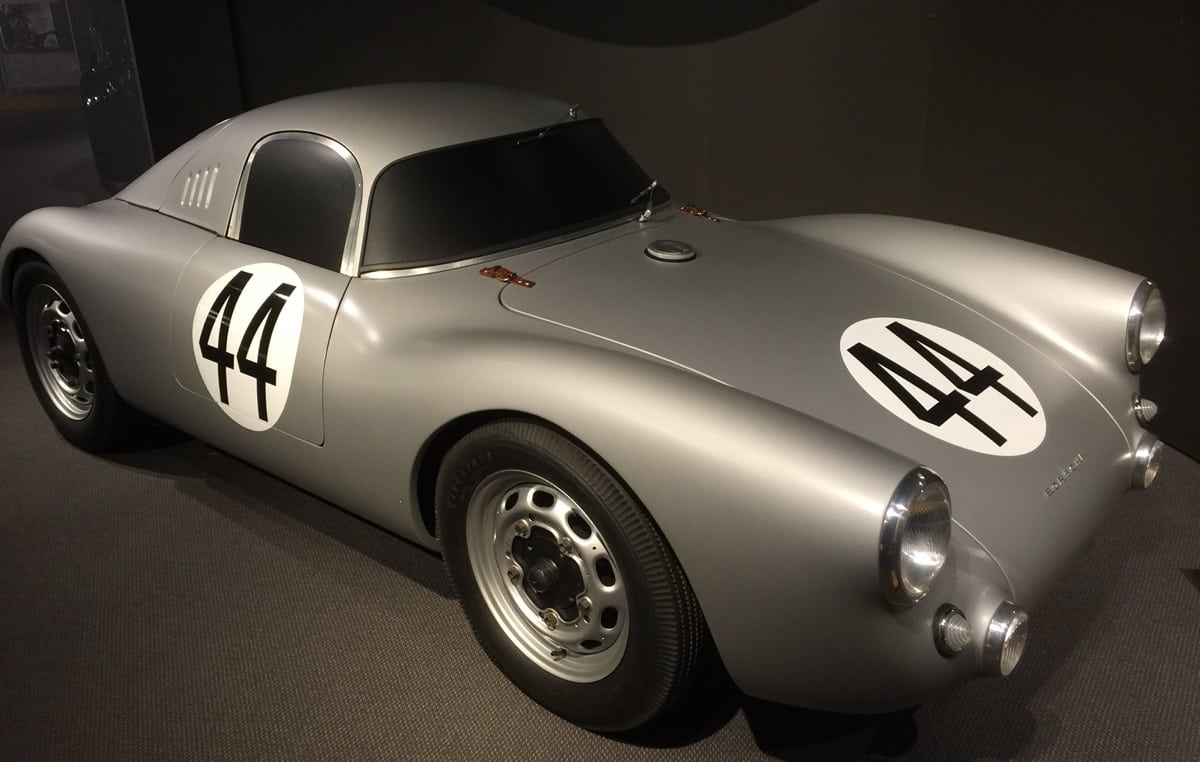 In 2011 The REVS Institute for Automotive Research started a unique academic partnership with Stanford University to further automotive studies and research and provide teaching and learning opportunities. The Insti­tute also houses one of the finest automobile libraries to be found anywhere. The documents and photographs at Le Mans, Grand Prix Racing at Watkins Glen, and other courses provide an uncommon historical record of the evolution of motor sports.

We highly recommend a day at The REVS Institute and Collier Collection at 2500 S. Horseshoe Drive Na­ples, Florida. It’s open Tuesday, Thursday and Saturday. To plan a trip, advance reservation tickets are required and docent led tours need to be booked a month in ad­vance. The side stories told by the docent were worth the price of admission.