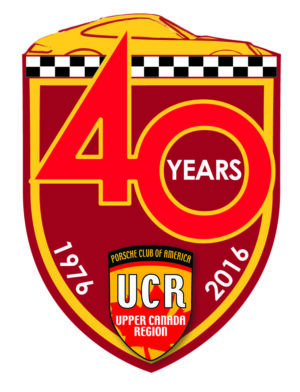 In September, 2016, we celebrated the 40th anniversary of the presentation of the PCA charter to the newly formed Porsche Club of America, Upper Canada Region.

In 1976, Mick Williams was PCA National President and Doug Troyer was the Zone 1 Representative.

The issuance of our PCA charter was approved July 21, 1976, at Parade ’76 in Brainerd, MN, and was presented in September by Chuck Stoddard, and Doug Troyer, Zone 1 Representative. Our first UCR President was Geoff McCord, who remains a member to this day.

We need to thank those that first had the idea to form a club. Geoff McCord was their leader. In 1976, perhaps it was just a band of enthusiasts who needed to learn how to fix their Porsches. Hans Pfaff was a proud supporter from the very start and the Pfaff Porsche dealership continues its support to this day. The Mosport Porsche Park came on the scene in 1976 and was a meeting ground for many Porsche owners.

Time marches on and our Region has grown immensely. We started with 25 members. We had 190 at our 10th anniversary. Today, we are over 3000 strong. It took a while to really get rolling but baby, look at us now!

We have been recognized as Region of the Year twice. Amongst our members who have been recognized internationally by PCA, Botho von Bose is an Enthusiast of the Year (formerly Zone 1 Rep), Mark and Angie Herring have been honoured with the Zone Reps Award, our Provinz has won newsletter awards in 1988, 1992, 2007,2010 and in 2014 for the Betty Jo Turner Award for the best overall PCA regional magazine.

No one has served longer or more capably than Mark and Angie Herring in the membership function and we owe them a special debt of gratitude.

In 1955, long before there was an “Upper Canada Region”, Frank Adams joined as a PCA charter member. Some of our current members also joined PCA before we received our charter in 1976. They are Sorjo & Aira Ranta (1958), Geoffrey Fowlow and Janet Matthews (1966), Gerd Schwarzkopf (1969), John & Margaret Walker (1975) (deceased 2001). Charter (and still) members from 1976 were Geoffrey McCord, Ian & Bernice Blackstone, Bernie Ungerman, Frank & Cornelia Bittner, Heinz Loth and David & Betty Pateman.

Recipients of the Betty Jo Turner Award for Newsletter Excellence