Home »About PCA UCR »How Does UCR Fit In? 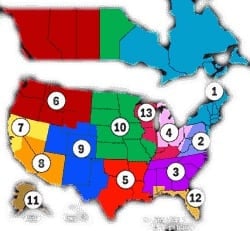 The “National” Porsche Club of America comprises 143 Regions (chapters) organized into 13 Zones across the USA and Canada. Upper Canada Region, with nearly 2700 primary members (4,000 including family/friend affiliates) (Jan, 2017), is the largest Region in Zone1 and the largest in the whole of PCA (up from 8th place in 2009). Zone 1 covers the Northeast United States and Eastern Canada. With over 15,000 members, it is the largest PCA Zone with about 20% of PCA’s 75,000+ primary members. Zone 1 is incorporated in Maryland, where the PCA National Office is located.

UCR runs a full annual calendar of about 50 events in the Greater Toronto Area and throughout the Region. Zone 1 also runs several events in some of its northeast USA Regions. With multi-Region volunteer support, PCA organizes several events, too, e.g. Porsche Parade, a week-long summer event held in a different US location each year and attended by up to 2000 members and their families from PCA Regions all over North America. PCA also runs Tech Tactics meetings, a tour, known as “Treffen” and partners with others to host members at major races and other auto-related events.

All events are run according to the  Parade Competition Rules (PCRs) and “safety first” is the guiding principle.

The Zone 1 Representative, Mike Bryan , is helped by a number of volunteers, who as committee chairs oversee the various events.