Home »Provinz»Advertiser of the Month: Paragon Competition – Way more than meets the eye!

By Kye Wankum, UCR Member (from Provinz May 2014 page 36) Photos by Paragon and the Author

Late last year, I finally managed to catch up with our long-time advertiser and club supporter, Joe Chan and his company Paragon Competition, along with UCR’s newly appointed advertising manager, Clive van Wert. Visiting with Joe was quite an eye-opener, as we had no idea of all the different areas he and his company keep busy with. But that just reflects what is so typical of Joe and his quiet and modest demeanor. He just works away quietly and professionally—without too much fuss.

First, there is the beautiful store, where they stock a very nice selection of just about anything an enthusiast driver, trackie or racer might need. From helmets, to driving suits, shoes, gloves and HANS devices, and even to racing seats, harnesses and competition suspension items, the list goes on. Many items are in stock and can be taken away on your visit. Check out their website for a better sense of all of their offerings.

But the store is really just the introduction to Paragon, as we found out when Joe led us through the doors at the back of it and into the adjacent warehouse. Here, in the neatly arranged rows of shelves, on the hoists and under the car covers, Joe introduced us to another world. 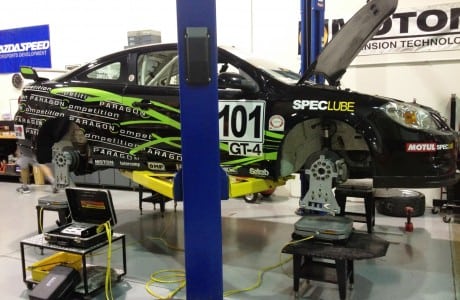 Little did I know that Joe is an avid and very established racer, as he showed us his Cobalt racecar on the hoist. In fact, the name “Paragon Competition” came from their racing team, Paragon Motorsport, which has fielded campaigns in the Ontario Challenge Cup and in the Grand Am ST class. Experience gained from the Firestone Fire Hawk, Michelin Enduro, Motorola Cup, and Canada GT Challenge Cup, has brought their team numerous victories and championships. They understand the needs of motor sport enthusiasts, the racers, and their teams, and so they stock only the best brands. Many of Canada’s top racing teams and motorsport enthusiasts depend on their knowledge and experience, and their team of dedicated professionals is able to provide race-winning solutions, for track days, karting, road-racing and rallying.

Also under cover in the warehouse, Joe unveiled his beautiful and immaculate 997 Turbo in grey metallic—what a gorgeous car! Joe uses a license plate decal that he had custom-made on the front of his car, so as not to spoil the looks and aerodynamics but he says that, while that is perfectly legal, he has to educate the odd police officer when they decide to pull him.

But back to the warehouse: we saw piles and piles of boxes, as well as drums of Motul Motor Oil and other lubricants; turns out that one of the mainstays of the business is just that: oils and lubricants for the automotive industry on a commercial supply level.

As it happens, the 2013 season had come to an end with a celebration: the Paragon Competition GS Camaro wrapped up the GT Challenge GS title and the Team Championship title. Having missed two races of the season, the team came into the crucial round of the 59th running of the BEMC 3-hour endurance race at Mosport in the fall. A double points race, this would be the deciding event for the title. They were 26 points behind the current GS class points leader, but the team was focused and ready. The pit stops were the key and, at a full-course yellow, just after the half way mark, the Paragon Camaro came in for 17 gallons of fuel and a driver change. Executed flawlessly, they got the Paragon Camaro out of the pits at the minimum required time and, running a good pace, their Camaro led and won the 3-hour endurance race, taking home maximum points and the lead in the GS class. 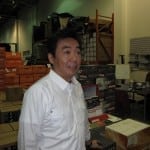 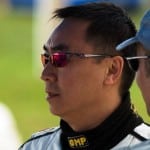 Paragon Competition offers many services; these include the building of customer cars, be it for street or track; optimizing a car’s performance; damper service and rebuilds, including dyno tests, oil change and recharging with Nitrogen; shock absorber re-valving; autocross and solo racing vehicle set-up; suspension systems from Moton, Bilstein, H&R and Hypercoils; brake system optimization, including using lubricants such as Castrol SRF, Motul RBF600 and Endless RF650; and, of course, all the safety gear required for every driving experience, from street to DE, autocross, regional and pro racing.