My bedside alarm went off early on Saturday morning, August 15th… got to head out early to be at the meet point in Etobicoke. Checking the weather I saw there was a possibility of rain but hoped there wouldn’t be any (otherwise the 356’s wouldn’t come out).

“Aircooled” was advertised only on social media and local Porsche forums. The idea, and event, was organized by my friend Jakob Pospieszynski (along with Nicholas Russo). He reached out to Porsche Centre Oakville’s mar­keting department in July about the possibility of a “Cars & Coffee” event being held on the dealership grounds. They were happy to welcome everyone to the front parking area of the dealership and would provide refreshments at the cafe.

I made it down to The Queensway and Islington by 7:20AM and dug my camera out. It had been a top up drive (in the 997.1 C4S Cabrio) as the skies looked threatening. I took some photos as Porsches arrived and met Stan and his lovely restored Aga Blau 912. 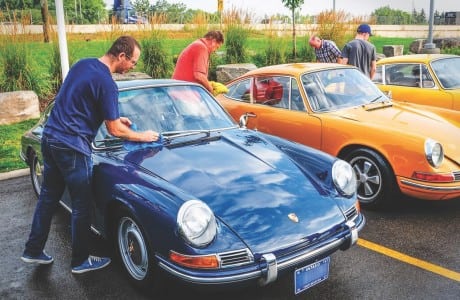 Then, very quickly it seemed, it was time to head to Oakville, so one dozen (mostly air-cooled) Porsches took off westbound. Put the top down as the skies had cleared… perfect! Amazing sounds those Porsches make!

After a too quick drive (meaning, it was over much too soon) on the westbound QEW we arrived at the off ramp, and the skies, which had turned dark again, opened. Top up again as the rain started, but by the time we arrived at Porsche Centre Oakville, the rain had stopped.

There were LOTS of Porsches there…mostly air-cooled. This water-cooled “cousin” sought an inconspicuous parking spot over at the far side of the dealership…and dug my camera out again…looking forward to the sights. 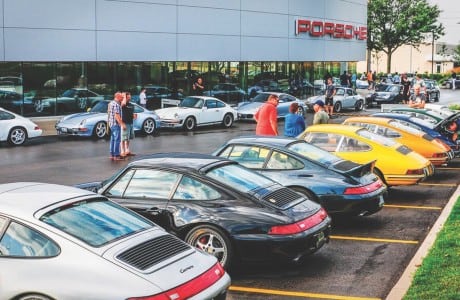 It was truly worth losing a little sleep, as there were many “firsts” for me this day.

My first visit to Porsche Centre Oakville and it is one big, beautiful dealership! I saw many early model 911’s and got to examine Stan’s beautifully restored Aga Blau 912 – really love that colour! I got to see a stunning completely original, silver 964 Carrera RS! There were some gorgeous GT3’s in attendance, but of particular note were the retro-liveried Porsche Centre Oakville Motorsports GT3 and the brand new, Lava Orange, GT3RS! Stunning cars! 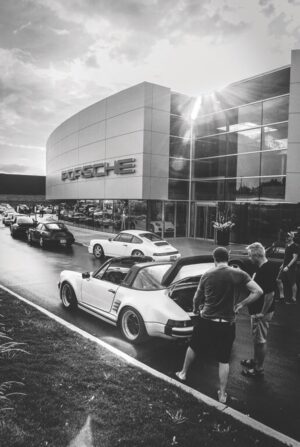 The last, and perhaps best, “first” was the Singer “Toronto” that attended. I’d guess the colour was Geyser Grey (at least, it looked similar to that, not knowing Singer Vehicle Design’s colour names). I’ve always been intrigued by Singer but oh-so-expensive! Seeing one up close, I saw the exquisite craftsmanship and attention to detail. Wow…I get it! Still need to win a big lottery though.

Despite the early rain shower that morning, 56 air-cooled Porsches attended! Porsche Centre Oakville provided refreshments and even gave out some of their Motorsport T-shirts, but I was so busy snapping pics and chatting, I missed out!

Many thanks to Porsche Centre Oakville and the organizers for this event! Similar events (with a broad focus on all Porsches) are planned for the future…looking forward to it!