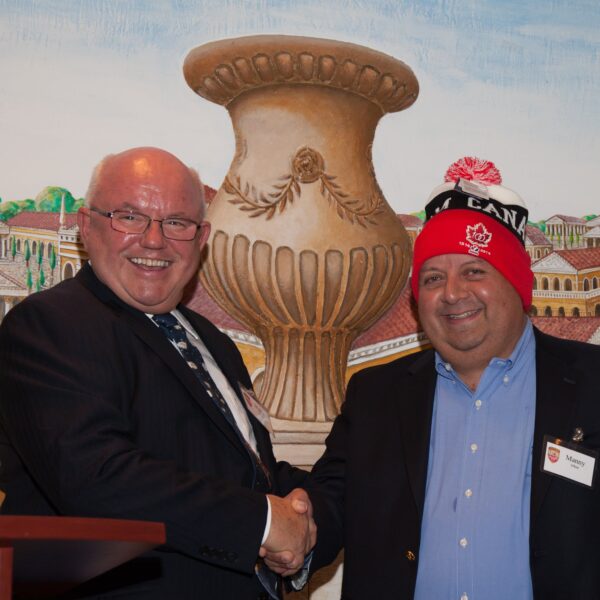 The 2014 UCR Awards Banquet was held at Riviera Parque on Saturday, November 22, 2014. We had an attendance of about 90 people at the banquet. A new 911 Targa 4S stood guard in the foyer (courtesy of Porsche Cars Canada). Alexander Pollich, President & CEO of Porsche Cars Canada, was the keynote speaker at our banquet. 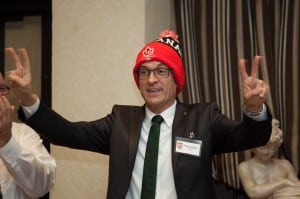 The banquet began with opening remarks by Walter Murray, outgoing UCR President. Walter thanked all the volunteers who provided their time and selfless efforts and contributed to record participation at almost every single UCR event in 2014. We had 900 participants at our Drivers Education (“DE”) events, 400 participants in 12 Fun Runs, record sellout at all Autocross events, 80+ attendees at a number of Socials, a record attendance of 300 participants at “Shift into Spring” in April, and 69 cars at the Concours in September, and another successful Targa in the scenic Prince Edward County in October.

The two most heart-warming events in 2014 were the “Driven to Smile” event, organized by Jill Clements- Bartmann and then-UCR director Del Bruce. About 40 UCR instructors and members gave rides to 400 physically challenged children and their families at Canadian Tire Motorsport Park (“CTMP”) in June.

Walter thanked the Board for the great work during the past year, and especially the four Board members who have served with distinction for many years but they have to step down due to term limits, namely Del Bruce, Mario Marello, Arthur Quinlan and Sheri Whitlock.

Walter acknowledged Ken Jensen, who is our webmaster supreme, membership retention and an advisor to both the President and PCA on its membership database upgrade; and John Adam, who is the Historian of UCR and the advisor and coach to the President during the past few years.

UCR received a number of very special rewards from Porsche Club of America (“PCA”) in 2014:

UCR is the second largest region among the 141 regions in PCA, with 2,278 primary members (plus 1,185 affiliated members for a total of 3,463 members) at the end of October 2014. The number of primary members had increased by 823 or 57 percent from five years ago. The significant growth in members was driven by Downtown Porsche and Porsche of London, which give a free UCR membership to all customers buying a Porsche from them. Walter acknowledged the dealer principals from Downtown Porsche who were present at the banquet, Helen Ching- Kircher and Peter Kircher, and thanked them for the continued support of UCR.

Walter introduced Manny Alban, the National President of PCA, who flew from the States to attend our banquet. Mr. Alban has an amazing credential with PCA. He became the President of the Chesapeake Region at the age of 27 in 1993, earned his PCA Club Racing license in 1998 and became a DE instructor in 1999. He was elected to National Secretary in 2005, National Vice President in 2009 and National President in 2011 at the age of 45. He currently drives a 1990 911 C2 and owns over 3,000 Porsche diecast models.

Alban told us the top issue that keeps him awake at night is: what he can do to motivate and retain volunteers. PCA is a member owned non-profit organization, therefore, the growth of the club is purely attributable to the efforts of volunteers.

PCA was founded in 1955 and it has grown to 115,000 members (primary and affiliated) today. PCA is the largest single marque car club in the world. PCA will be celebrating its 60th Anniversary in 2015 and Alban said there will be a surprise announcement in January 2015. Stay tuned! Walter thanked Alban for his speech and gave him a toque with the word “CANADA” on it.

UCR joined PCA when it received its charter in 1976. In 2014, there are 235 members who have been part of the UCR family for five, 10, 15, 20, and every five years thereafter. Walter presented certificates of appreciation to the following long-time UCR members who were present at the banquet: 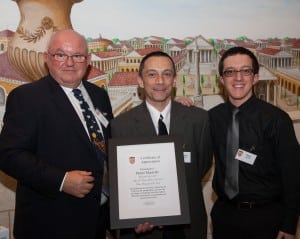 Retiring Board Member, Director and two-time President Mario Marello and his son, Paul accept their certificate of appreciation. 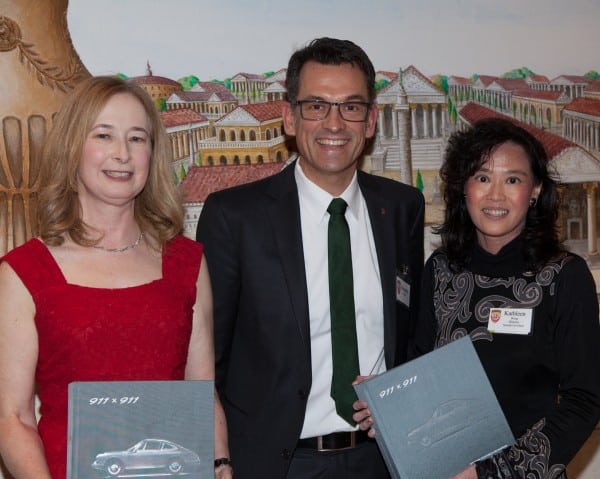 Walter announced the Socials co-chairs,  Laurel Ward and Kathleen Wong, won 2014  “Enthusiast of the Year” award due to the  record attendance at a number of socials. The  award was sponsored by Porsche Cars Canada.  Alexander Pollich, the President and CEO of  Porsche Cars Canada, presented a 960-page  anniversary book celebrating 50 years of the  Porsche 911 to each of the co-chairs. The massive  book (weighing eight lbs) covers seven  generations of the 911, starting with the original  901 prototype unveiled in 1963.

Mike Bryan, the incoming President of UCR,  delivered a short speech thanking Walter for the  mentoring and guidance during the past two  years and gave him a 911 Turbo diecast model  as a gift of appreciation.

Walter introduced Alexander Pollich as the  keynote speaker of the banquet. Mr. Pollich  also brought his two colleagues to the banquet:  Alexander Schildt (Director of Marketing), and  Ben Badenoch, who is a master organizer and a  Camp 4S workhorse. Pollich has over 20 years  of automotive experience. He joined Porsche AG in 2001  as the head of the Strategy Projects Department. In September  2013, Pollich became President & CEO of Porsche  Cars Canada.

Pollich began his speech with the history of Porsche.  Dr. Ferry Porsche was the father of the Porsche 911 and  he said, “In the beginning I looked around and could not  quite find the car I dreamed of. So I decided to build it  myself.” This was how the Porsche 911 was born.

Porsche has demonstrated strong growth in Canada  compared to its competitors. Since the economic crisis in  2008/2009, Porsche new vehicle sales in Canada had more  than doubled to 3,680 in 2013. For the first 10 months  ending October 31, 2014, Porsche new vehicle sales  increased by 34 percent, to a record 4,171. New vehicle deliveries  were particularly strong from June to August due  to the successful launch of the Macan. There are currently  15 Porsche centres (six in the west, four in Ontario, four  in Quebec and one in the east) operating in Canada with  plans to open two additional Porsche centres in Western  Canada during the next two years.

Porsche Cars Canada continues to have a strong focus  on customer events and motorsport during 2014. For  instance, there were 240 participants at the Camp 4/Camp  4S program in February and March 2014; 900 participants  at Macan Grand Tour from May 23 to June 8; 32 participants  at Performance Tour West in October 2014; and the  Ultra 94 GT3 Cup Challenge Canada by Michelin had  20 drivers participating in 10 races at CTMP, Calabogie,  Toronto Indy and Trois-Rivieres during five separate  weekends. Camp 4 is returning to Canada in 2015 with  Camp 4 on Feb. 3-12, Camp 4S on Feb. 11-15 and Camp  4RS on Feb. 20-27 at the Mecaglisse track in Québec.

Walter thanked Mr. Pollich for his speech and gave him  a toque with the word “CANADA” on it.

The evening wrapped up with four hired musicians  singing Christmas carols. Walter asked each table to  designate a caroler to sing a Christmas song and we found  quite a few talented singers at UCR—UCR’s Got Talent!  John Adam gave a closing  blessing prayer and wished  everyone a safe drive home  and a wonderful holiday  season.

We sincerely thank the  following volunteers for  making the banquet another  success: Walter Murray for  organizing the banquet;  John and Rosemary Adam  for putting together a menu,  which offered a multi-course  dinner with wine pairings;  Mario Marello for taking  care of the registration and  visual equipment; Michael  Coates (UCR photographer)  for putting together the slide  show in the banquet room  and taking pictures throughout  the evening.