This story actually begins before Scott was even born. In the early nineties, when I lived in Calgary, I visited Vancouver for the Indy car race. I was fortunate enough to be invited to the Shell hospitality suite and got chatting with a fellow, Jim Hargrove. It turned out we had a mutual friend in Ottawa who was the best man at Jim’s wedding! Our mutual friend emailed me in 2014 to say that Jim’s son Scott was racing in the Ultra 94 Porsche GT3 Cup Canada by Michelin and did I want to come to Canadian Tire Motorsport Park and see Jim again and watch his son race.

Not only did I go but Scott put the Porsche on the pole and won the race – making the pass for the lead right in front of us! Scott went on to win the 2014 championship with six wins in the 10 races. He returned this year with Open Road Racing’s Porsche but missed the first two races making this year’s championship a long shot. Scott has won five of the six races he was able to enter this season.

I conducted the following interview just before the penulti­mate race of the series.

DW: How did you get started in racing?

SH: As you know my Dad, he is quite the motorsport en­thusiast. When I was growing up I was always around racing whether it be Formula 1 on TV in the morning or ALMS or Gran Am or Indy Car or even some NASCAR sometimes. It was always constantly on TV. In the early 2000s my Dad got his sports car license and we were at the BC road racing races and Mission locally. Watching him, I started bugging him that this was really cool and I wanted to get into racing. 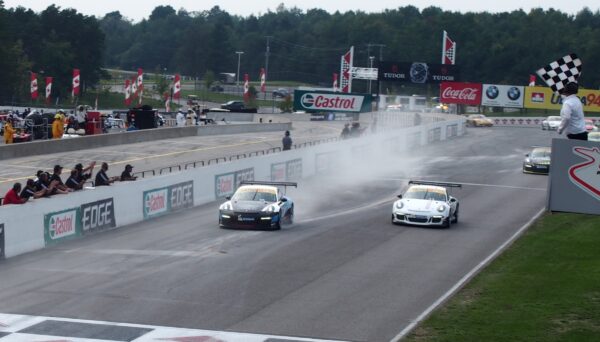 I found out about go-karting and at what seemed to me to be a young age starting out at 13, it turned out to be quite late compared with most of the guys I started racing against who started out at eight or nine and younger sometimes. I started in 2008 and one thing led to another. I ended up in cars and raced closed wheel and open wheel all the way up to Indy Lights on the open wheel side so lots of different things and lots of fun.

DW: That is a little about your progress of the last couple of years. I understand that last year was not only your rookie season for the Ultra 94 Porsche GT3 Cup Canada by Michelin but it was the first time you had been in a Porsche. Is that correct?

SH: First time ever in a Porsche – yeah behind the wheel obviously. I had sat in one and been in the passenger seat but the first time I ever drove one was on a race track – a pretty cool experience. It feels like a video game the first time you get in the car. I’ve driven Porsches in the simulator all my life but when you get behind the wheel this is the real thing but still feels like a video game to me. Going out and having fun and adapting my mind set from open-wheeled race cars to more of a sports car way of driving, is almost like slowing things down to speed up. If you drive a sports car like a formula car you will end up burning the tires off in about three laps. You just slow things down and make sure you take care of the car and take care of the tires.

DW: How do you take care of the tires?

SH: Well you can’t slide the car so drifting is a no-no. You got to make sure you don’t lock up the tires. Be precise with your inputs but do it smoothly.  In an open wheel car, you can flick the car and it will be a quick transition but here, generally, you ease it over, load up the weight, get the weight transfer done, so it is just about being smooth and precise with your inputs. 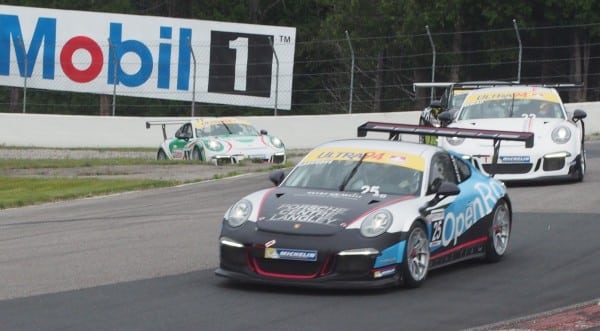 DW: How did you end up with this ride?

SH: It was a bit of a fluke to be honest. I come from an open wheel background and I was part of the Road to Indy; USF2000 then ProMazda then Indy Lights. In USF2000, in my second year running that championship, I won; which put me up into ProMazda as a Mazda Speed Scholarship driver. In 2014, I raced ProMazda and came within a hair’s gap of winning that championship when my car let me down in the final race of the year. It was a bit of a heartbreaker. (Scott’s car broke near the end of the last race while he was leading both the race and the championship.)

In 2014, I just happened to get in touch with Christian Chia the owner of Open Road Racing and found out that he raced so I sent him an email telling him about myself. He emailed me back and said to come down to the dealership and have a chat. I just expected to meet this local guy and the next you know it was basically a job interview to drive a Porsche. He liked me. He put me in the car and after the first weekend where he saw me win, then he said okay let’s do another one. I won again and he said alright let’s do it and put me in the car for the year.

That is how the whole thing came about and I was introduced to the Porsche family and to the Porsche Young Driver Academy. They brought me down with four other of North America’s best young drivers and we all got to show the head people of Porsche what we’re made of and can do. That was actually a really cool experience and I gained connections there that will help me through my whole career.

DW: What kind of things did you do at the Porsche Academy?

SH: It’s a closely guarded secret! {Laughs} No it’s really good. They do media training, the psychological part of it, and go into theoretical and actual on track performance. They evalu­ate it all but they don’t compare you. You’re number one, you’re number two, they are just watching. At the end of the weekend you get a phone call to tell you how you did. It’s a cool thing to do and like I said it’s not a race, not a competition, you are just there to show them what you can do.

DW: I wanted to ask you what do you see as your future racing career. As race fans we always like to cheer Canadi­ans so what are your immediate and long term goals?

SH: My immediate goals are a little flexible as it depends on what opportunities I get. In the broader sense, it is to become a professional race car driver. In the long term, I want to be in every series I can and win as much as I can – Le Mans in a Porsche, ideally, the 919 would be amazing or here at home in North America in the Tudor series or IndyCar, Indy 500, who knows, Formula 1. You never know what will happen. I want to do it all and win it all. 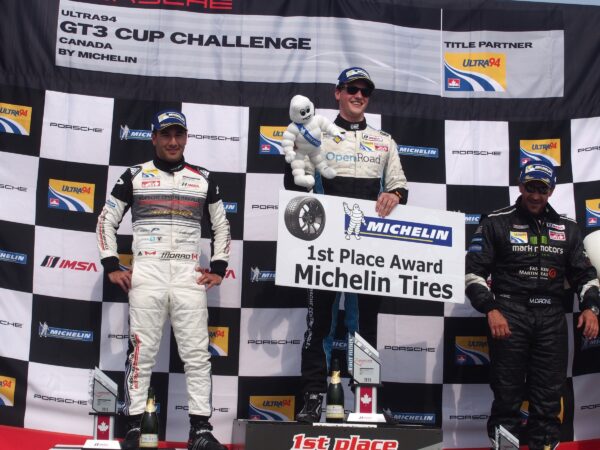 DW: Well that’s the best goal of all.

DW: As my last question, I heard that Porsche lent you a car last year.

DW: Did you get a few tickets?

SH: No, no tickets but got pulled over a couple of times. Why is this young guy driving a brand new Porsche? It’s pretty funny but it has been pretty nice to have. I am pretty spoiled as a 20-year-old driving around in a Porsche. It is a 911 Car­rera and I am loving it every day and I don’t want to give it up. They will have to pry it from my fingers!

DW: Thank you Scott for your time. Anything you wanted to add?

SH: Here we are at the last weekend of the year with a mathematical chance at the championship but because I didn’t run all the races this year it is a long shot to say the least. The points system isn’t quite structured so you can make up a lot of ground by just going out and winning as many races as possible. I have secured the most wins in the year so hopefully I’ll have a couple more wins this weekend and it will be seven wins of the eight races I did this year. That is my goal.

Postscript: Scott did win the last two races and so won seven of the eight he contested. Chris Green, racing for Pfaff Motor­sport, won the championship just beating Daniel Morad who races for Porsche Centre Oakville. Scott congratulated both his rivals and hopes to be back with Open Road Racing for a third season.