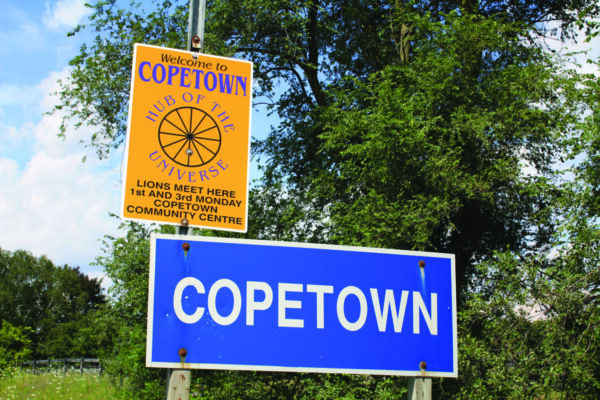 On July 26th, participating members of PCA UCR gathered at the western edge of the Dundas Valley at Queen’s Rangers Public School, Copetown, On­tario on a brilliant, sunny Sunday morning.

Copetown is the self proclaimed “Hub of the Universe”, just a short distance from the World’s Fair in Rockton, held annually in October, home of the best demo derby in the area. Copetown is on Governor’s Road or Kings Highway #99. The military road was finished in 1793 linking St Law­rence York with London on the Thames. Members of the Queen’s Rangers, King’s Regiment and Butler’s Regiment mi­litias were given homesteads as they cleared the right of way. Old 99 was an original transportation spine later replaced by King’s #2 and the 401. Today, it is a back road through the Dundas Valley. 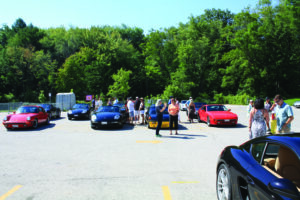 Twenty-two Pcars arrived. It was an eclectic mix with an immaculate, bespoke 914, a red 944, Carreras, Boxsters, a Cay­man and a white Cayenne, which the owner described as a “bread truck”. Nice truck!

It was wonderful to meet such interesting people. Some had travelled quite a distance for the event. All were looking forward to a great day. There was lots of chat­ter about the cars and everyone was so friendly, making new friends, exchanging introductions as each car arrived.

Our host, the ever-gracious Neil Dowdell, ensured that everyone signed the waivers and gave us the order of the day with the route that he had carefully plotted for us to enjoy.

Off we went, heading east along Governor’s Road then north up Middletown Road finding our way to the hamlet of Christies Corners. We made quite the sight as 22 Porsches rumbled along the back roads as churches were letting out. Then it was north on Crooks Hollow, past two ruined gristmills on Spencer Creek, past Webster’s Falls to Sydenham Road overlooking the valley and Hamilton to the east.

Down we went into the valley and through the town of Dundas on side streets. Lights and traffic separated our procession somewhat. The tail end caught up with the group at Weirs Lane just past the valley brow.

Next we headed south on Mineral Springs Road to Sulphur Springs, past the Hermitage Ruins to Lovers Lane in Ancaster and west along Jerseyville Road, down the hill to Spring Valley.
Back in the day, Jerseyville Road was a barely used, hard packed gravel rural road. A bunch of us kids built go-carts out of scrap lumber and baby carriage wheels. They were crude to say the least. You steered the thing by pushing your Keds left and right on the front axle. Brakes had not been invented, that was left to later models. The preferred method of stopping was to use your feet, or in an emergency to push hard right or left to induce a wild oversteer slide, hop­ing that the thing would not roll. 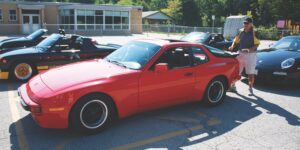 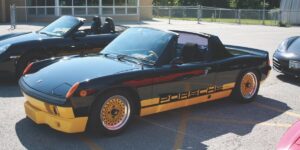 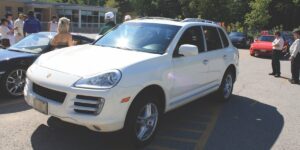 Soon enough we found ourselves at Kelsey’s in the Meadowlands. Cold beer and great company go hand in hand. Sheila and I had a delightful chat with Wally and Barb mostly about fun runs and Porsches.

Sunday mornings are a great time for fun runs as traffic is light. Back roads are best for the scenery and relaxation. Porsches attract attention, as all of us know. Twenty-two shiny Porsches in a row attract even more attention. We were razzed a couple of times by folks on motorcycles. Everyone drove responsibly with the odd rip when the coast was clear so as not to bother others.

It is a joy to see the number of people out on bicycles on the back roads. Some in groups, some with all the gear and some alone. Back roads can be narrow, bumpy and many do not have a shoulder. Mix in hilly terrain and there is a recipe for trouble. As motorists we have a responsibility to exercise great care and patience to ensure that everyone is safe, yielding the right of way as required. Coming over a hill at speed to find a gaggle of bikes on the other side would not be good. 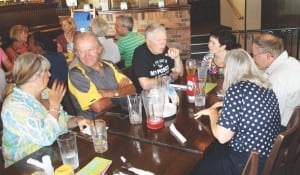 Neil said some parting words and encouraged us to attend the Club Race at CTMP, perhaps to volunteer. Neil was thanked on behalf of all of us.

Great day, wonderful folks, and ter­rific cars, with thanks to Neil Dowdell and PCA UCR! It’s all about the people, not just the cars!

Previous article2015 Autocross Season Update – Despite a late-season start that led to running two events in July – both were a rousing success…
Next articleUCR RALLY DAY! – UCR’s “True Rally” format means navigators are as important as drivers

OBJECTS OF DESIRE – Return of the Curse of NNJR