By jensenk
By Laurel Ward, UCR Socials Co-Chair (from Provinz May 2014 page 11) Photos by Michael A. Coates, UCR Club Photographer 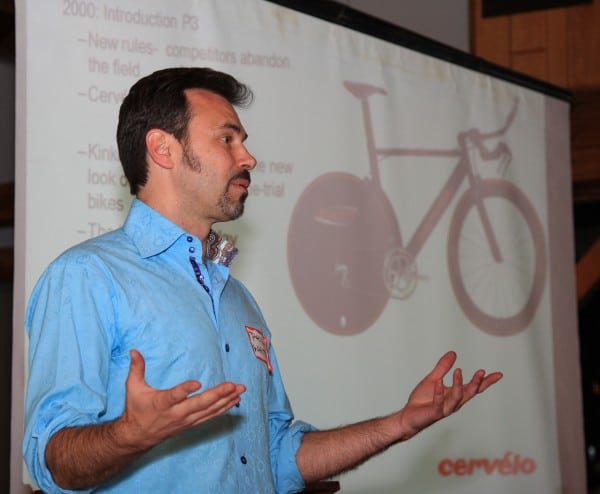 A beautiful evening of 15 degrees and sunny skies greeted 100 UCR members for our April Social at Mimico Cruising Club.And this was just the first treat of the evening! We were delighted to have Phil White, long standing UCR racer and his wife, Anna Dopico-White, another passionate UCR trackie and racer join us for the evening.

Phil, co-founder of Cervelo bicycles, spoke about starting the business with his university friend, Gerard Vroomen, from his basement in Montreal after completing his Masters of Engineering degree at McGill University. Wishing to design and create something, and being passionate about cycling and driving, they brainstormed the design of a bicycle frame with new aerodynamic materials. In just over two weeks they had the bicycle manufactured, and Cervelo took off from there.

Phil engaged UCR members, bringing in samples of carbon fibre, Kevlar and a Cervelo RCA frame that weighs 650 grams—less than a bike water bottle. The crowd admired the much-coveted frame, with its price tag of $10,000.

Now the Chief Innovation Officer, with PON Group, which purchased Cervelo in 2012, Phil discussed the evolution of Cervelo to being the world’s largest manufacturer of time trial and triathlon bicycles, and having their bicycles win Ironman competitions and their rider winning the Tour de France. Cervello means brain in Italian, and velo means bike in French—the combination of the two is clearly the successful brainchild of two passionate visionaries who have a huge impact in the pro race cycling world. A wonderful success story to hear and we wish Phil and Anna all the best in every future endeavour.

The evening ended with many UCR members taking home exceptional Porsche raffle prizes and we welcomed all the New Members and First Time Social Members who joined us for the evening!