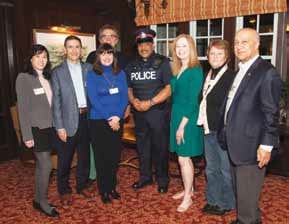 The UCR tried something new for its April social, holding it at the Donalda Club in North York. The event was a great success, with over 60 people coming out to enjoy the different venue. The sun was shining and it turned out to be the perfect kick-off to spring. Upon arriving at Donalda Club, everyone made their way to the formal dining room, overlooking the club’s beautiful golf course, and spent time mingling, catching up with friends and meeting new people, all while enjoying a selection of hors d’oeuvres that were circulated around the room. The club’s chefs and catering department prepared a delicious buffet spread for us, including hot food, dessert and coffee.

After people were settled at their tables, Mike Bryan, UCR President, welcomed everyone to the event, made some announcements and reminded us of the upcoming “Shift Into Spring” Open House to be held at 427 Auto Collision on Sunday, May 3rd. 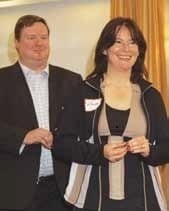 Laurel Ward, UCR Socials Co-Chair, got up and introduced new UCR members Ian and Rhonda Roberts and Eric Hachmer, presenting them with their UCR pins. Hazel de Burgh, UCR Fun Run Co-Chair, then told us about the upcoming fun runs for 2015 as well as the Street Survival School. 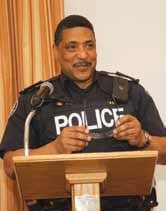 We were then treated to a very informative session with our special guest speaker, Police Constable Hugh Smith of the Traffic Services division of the Toronto Police Force. He spoke for about an hour, telling us about some upcoming changes to traffic laws and explaining some of the rules related to pedestrians, cyclists and e-bikes. It was extremely interactive, with a lively Q & A session. 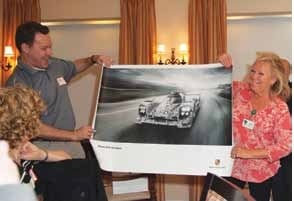 The evening ended with some lucky winners receiving raffle prizes, including flag jackets, a poster and Porsche calendar. We would like to thank Laurel Ward for helping to organize this very successful event and we look forward to seeing all of you at the May 3rd Open House and the next social on Tuesday, May 12.

I would like to thank Joanne and Jay Diament, UCR members, who introduced us to their beautiful Club, Donalda Club where we held our April Social. Donalda Club is a beautiful oasis in the City with easy highway access, free parking and a spectacular view of the City. Joanne, also kindly offered to write up the Social for Provinz this month. Thank you—we appreciate your contribution to our Club.