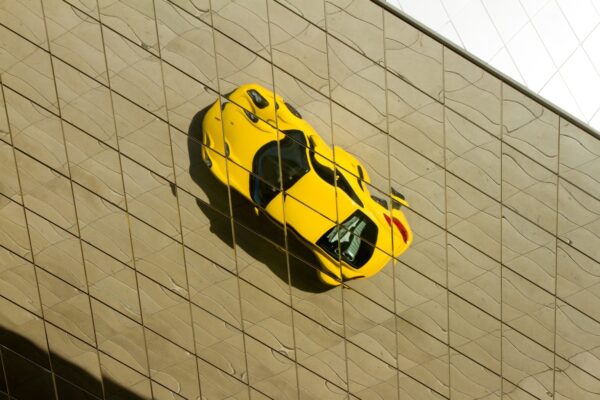 Cayman in reflection in the museum’s outside glass ceiling tiles. 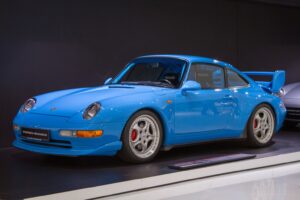 50-50 means different things to different people. Half this, half that, the charity draw at Leafs games, or, in my case, celebrating my 50th birthday by celebrating the 911 on its 50th.

I’ve enjoyed my 1995 993 C2 coupe since 2002, when I purchased it from its original owner. It has given me great enjoyment and I plan on keeping it many more years, quirky basket handle and all. But as time passed I became smitten with the idea of owning a modern sports car, one in which the windshield doesn’t squeak, heating and air conditioning are drama-free and my kids can’t fiddle with the cassette tape holder. What to do, what to do?

Despite its impressive performance and numerous accolades as a great “driver’s car”, the 991 just didn’t do it for me. Was it because I’d already gotten the 911 out of my system? Maybe it was its sheer size compared with my relatively petite 993. Perhaps it was because of the middling reviews that the PDK-based seven-speed manual transmission received. Whatever the reason was, ultimately I decided to bide my time and wait for a car that “spoke” to me. 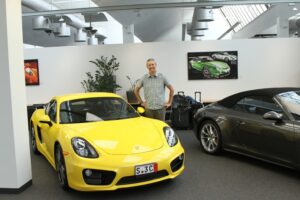 Picking up the Cayman

I had admired the Cayman’s reputation as a great handling car, but the styling was always a bit too delicate for my tastes. So when I saw the first spy photos of a poorly disguised 981 Cayman I have to admit my heart skipped a beat. Here was a car that retained most of the original car’s DNA but which had undergone a fairly dramatic makeover both inside and out. Gone were the elegant lines that harkened back to European sports cars of an earlier era. Instead, Porsche’s designers had added muscularity and swagger that I found appealing. And although it had grown a bit in size compared with earlier iterations, its mid-engine layout, slick six-speed manual transmission, slot car-like handling and fantastic brakes embodied all that I was looking for in a modern sports car.

I contacted Porsche Centre Oakville in January when it was nothing more than a website and a phone number. “Would it be possible”, I asked, “to purchase a car even though the dealership was months from completion?” “Absolutely” was the reply. So, after many long winter evenings spent with Porsche’s online Car Configurator, testing out various colour and option packages, I settled on a six-speed Racing Yellow Cayman S optioned with a nod to performance. We provided some details on our arrival date in Stuttgart, hotel preference and preferred pickup date and in return PCNA sent us an information package that included a hotel voucher and a couple of taxi chits. 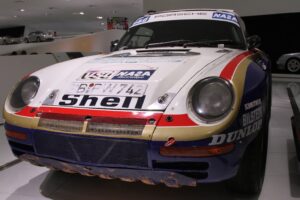 Fast forward to July. After bundling the kids off to camp, my wife and I hopped on a flight to Frankfurt and then Stuttgart, arriving on a Saturday morning.

During dinner we were treated to a parade of automotive eye candy. As our host explained, Stuttgart’s car crazy locals’ favourite Saturday night cruising spot was the street right outside our hotel! So, as we were enjoying our meal we were entertained by a steady stream of automotive exotica including Ferraris, Lamborghinis, Mercedes’ and of course, Porsches. Many, many Porsches, both old and new. 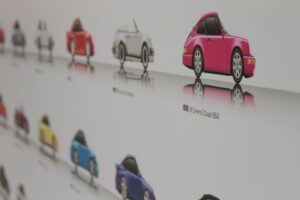 Since our car pickup was scheduled for Monday, the one day each week the Porsche Museum closes, we decided to devote Sunday morning to the museum. One of the many events Porsche hosted this year to celebrate the 911’s 50th birthday was a special “History of the 911” exhibition that had opened the month before at the museum. We hopped on an early-morning train and after a 10-minute trip we arrived at Porscheplatz in the suburb of Zuffenhausen. Getting to the museum couldn’t have been easier, as it is right beside the train platform and across the roundabout from the factory entrance.

When I saw the incredible array of 911s on display I could barely contain myself! For years I had been reading about these famous cars and now they were all there, in person, for us to admire. Honouring the German penchant for orderliness, I resisted the temptation to rush over and gawk at some of my favourite cars, choosing instead to follow the chronological tour, starting with early prototypes with hand-formed aluminum bodies, through to some stunning 356 examples, the 912, and then, at last, the 911s. 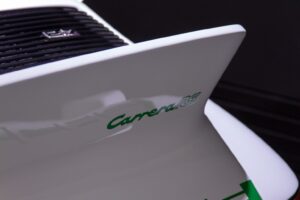 Think of an iconic 911 and there it was, on display. One of the original 911s from 1963 (then called the 901 until Peugeot took exception with the “0” in the model designation). A white and green Carrera RS 2.7 that was so striking I bought the 1:18th scale model as a souvenir. A 911 rally car. A 993 Carrera RS 3.8L Clubsport. Two “911-50” anniversary edition 991s. What a treat! And to top things off, informative exhibits showcasing Porsche’s engineering innovations were scattered throughout the exhibit.

The following morning was the “main event”, car pickup day. Per instructions, we checked in at the gatehouse and were then walked over to the waiting lounge, where we were treated to very good coffee and pastries. We were then introduced to the Porsche representative who took us through a set of doors to a well-lit room full of gleaming new cars. There, among the 911s, Boxsters and Panameras, was our very yellow Cayman S, the only one being delivered that day. 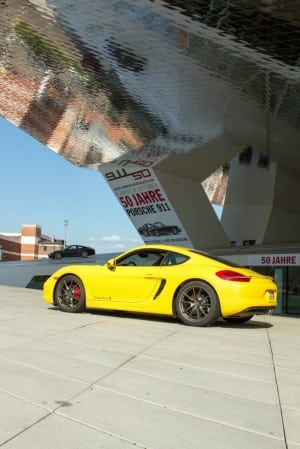 Cayman in front of museum with banner

Given the relative lack of electronics on the car, our orientation was a relatively quick affair. We then relinquished our phones at reception (no cameras allowed!) and joined a couple from California for the obligatory factory tour, another trip highlight. The shop floor wasn’t what one would expect at a car factory. It was quiet, airy, and very clean. Think electronics or pharmaceuticals manufacturer rather than metal bashing plant. To be clear, this was the final assembly line where all of the parts deliveries were orchestrated, using sophisticated just-in-time logistics and robot trolleys that delivered parts to their appropriate stations along the line. Any welding had been completed elsewhere. Nevertheless, it was fascinating to watch German efficiency in action, whether it was during engine assembly, attaching leather to a dashboard or when a body shell was mated with its chassis.

After the tour we were keen to hit the road so we said our good-byes and dashed out to our waiting car.

With the Porsche-supplied GPS set to town of Berchtesgaden, we headed off on the autobahn toward the southeast corner of the country, not far from the Austrian border. Cognizant of the break-in guidelines, we kept the RPMs moderate and put some kilometres on the tires. Occasionally we would veer off the motorway to sample some of the wonderful secondary roads that criss-cross the countryside. It was on these twisties that the Cayman really shone. With engine and suspension settings set to Sport, the little mid-engined two-seater literally danced over hill and dale, effortlessly carving through turns and maintaining its composure.

Eventually the first day’s fun had to end, so we hopped back onto the Autobahn one last time and made haste to Berchtesgaden. To my surprise, we were not the only Porschephiles staying at our small hotel, as we encountered a touring French Porsche club. I was doubly surprised to see that one of the participants owned a new Cayman that appeared to be a rolling advertisement for the performance tuner Techart. 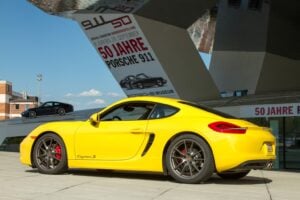 Cayman in front of museum

The German Alps don’t typically make the cut when discussing great European drives, but being a southern Ontario flatlander I was easily impressed by the roads we encountered in the mountains of Bavaria and northern Austria. For example, 10 minutes outside Berchtesgaden is the Rossfeldpanoramstrasse. The best time to drive it is early morning when the toll booth isn’t manned and the camper van drivers are still finishing their coffees. After an energetic run to the top we were rewarded with great views and almost complete solitude in the still, warm, mountain air. As an added bonus we learned that the mountain played a starring role in the Sound of Music. Never one to pass up a photo opportunity, my wife practiced her Julie Andrews impersonations while I recorded the moment. We enjoyed the Rossfeldpanoramstrasse so much that we went back a second time!

Another epic drive was the Grossglockner High Alpine Road. At 3,798m, it is the highest peak in Austria. The 48km toll road was an engineering tour de force when completed in the 1930s. The out-and-back route rewards drivers with many exciting switchbacks and a stunning glacier view at its terminus. Judging from the numerous supercars we spied along the way, we concluded the Grossglockner was a destination for many European automotive enthusiasts. Our Cayman (despite its eye-catching colour) didn’t attract a lot of attention, garnering only the occasional “thumbs up”, usually from overly excitable pre-pubescent boys.

We made our way west through the mountains over the next several days, combining spirited driving with hiking and exploring the many idyllic Bavarian towns we came upon on our travels. Although we’d purchased a detailed, large-scale map for route planning, we quickly realized that by following motorcyclists we found some great roads that we otherwise would have missed. It was also fun to deviate from our plans and take the “long way” to our next destination.

We spent several days in the spa town of Garmisch-Partenkirchen, home of Germany’s highest mountain, the Zugspitze. This major ski resort area (it hosted the 1936 Winter Olympics) buzzes with activity during the summer months as visitors take advantage of the gondolas that take them up to the numerous high alpine hiking trails that dot the mountainside.

Steering clear of the crowds for most of our trip, we couldn’t pass up the opportunity to visit the famous Neuschwanstein Castle, located on the outskirts of Füssen, the final stop on our Bavarian tour. Built by the reclusive Ludwig II but not completed until after his death in 1886, it was the inspiration for Disneyland’s Magic Kingdom. It lived up to its billing of being a major attraction, judging by the number of tourists we encountered. We didn’t linger any longer than needed, choosing instead to hit the road, putting some distance between the masses and ourselves.

After a week of brilliant sunshine, postcard-pretty alpine meadows and amazing roads, it was time to say good-bye to the mountains and head back to Stuttgart to drop off our little yellow car. 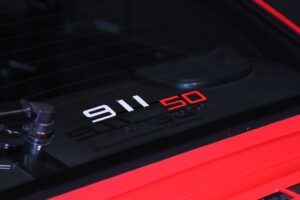 But one last item remained on my driving “To Do” list. With the Cayman pretty much broken in and emboldened by a 997 Turbo Cabriolet that flashed by us, I decided to try the car at speed on the autobahn, reaching 220 km/hr before being impeded by traffic. I can report that the car felt very stable and that the brakes are excellent!

Back in Zuffenhausen, we drove the Cayman right up onto the steps of the Porsche Museum, something we’d witnessed when visiting the previous Sunday. Photos taken, we’d drove back to the exact spot that we picked the car up. A security guard called for a taxi and we used one of our Porsche-provided chits to get us to the airport.

Despite the buildup in my mind prior to departure, I can truly say that the entire tour exceeded expectations. From the Porsche Museum’s 911 exhibition to the seamless European Delivery process to driving a brilliant sports car on some brilliant roads, this was definitely a “Bucket List” trip. If you find yourself pondering your own European Delivery adventure, I have three words for you: Just do it. And don’t feel you need to wait for the 911’s next big anniversary!