How does one measure success?

For Jennifer and me it has to be by the number times we heard “Thank you for a great day.” It was also in being overbooked. Except unlike the car rental companies, we honour our overbooking! I arranged for an additional group leader, so we could have three packs of Porsches on the Niagara Escarpment roads. Thank you to Mike Blinn and Stewart McKinney for taking the other leads. In the end, we stopped registration at 40 and unfortunately had to turn away others who called the week of the event. So in our books, we will call the third annual Bear Manor Fun Run a success.  This contributes to our desire to go for number four next year.

I asked to get some drivers to write about their day, instead of you hearing it just from our view.  We also have photos courtesy of a number of drivers as well. Having 80 people over to your house for lunch can seem daunting, however, Porsche people are the best. Thanks to all the attendees for your desire to drive, patience when we need to pull over and “re-pack” the group, and just roll with it and have fun. Gotta love Porsche owners.

You know that you have had a great outing when you get home and realize that you didn’t take one picture because you were enjoying the moment so much. Don’t get me wrong. I will sincerely appreciate anyone’s photographic documentation of the event because there were definitely picture-taking opportunities in abundance. Think 40 Porsches, and if my math is correct, 80 Porsche people, and you get double the enjoyment.

The route itself was scenic and I’m sure anyone who was on the run would concur that it was capital FUN! I judge a route by how many times I get that sense where it feels like something the P-car wants. You know that feeling. You are at one with the engineering. You feel something in the asphalt coming through the rubber and metal, usually through the accelerator pedal, and into that spot in the pit of your stomach that starts the glow. You feed that need by pressing down, watching the tach creep up to five-plus for those shifts that your car needs as much as you do. The size of your smile usually grows at the rate of the vroooom that rings more harmoniously than any symphony.

Add to that a sunny day, a well-organized host and hostess in the persons of Jennifer and Vaughn Warrington, not to mention the group leaders, Vaughn, Mike and Stewart, a pit stop at Rockway Vineyards, and then a catered lunch back chez Warrington.

How do you sum up a day like that in one word? Awesome! 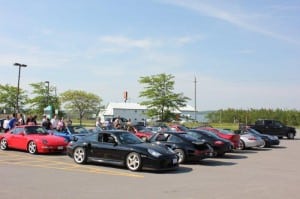 As we came over the crest in the road the black Cayman S in front of me had slowed down. Up ahead there was a line of Porsches snaking around making a left hand turn. We followed and found our way down a very narrow scenic road. It was at this point that I was wondering where Vaughn was taking us.

Let me back up. It was a beautiful day in mid-June that my son, Nick and I got up early to meet other Porsche owners to enjoy a day of cars, back roads and fun. Nick and I have been on other cruises/rallies but this was the first that was hosted by a PCA-UCR member.

The morning meeting place was in Beamsville at the Tim Hortons. We gathered in the back of the parking lot for some breakfast and to meet the other drivers. Once we all checked in and were divided into groups we picked up our first two cards for the Poker hand. It was a good start for us with an 8 and 9 of clubs. My car was the brightest colour so Stewart, the leader of our group, asked that I be the last car in the train. 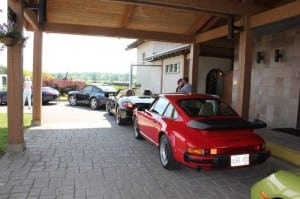 On our way to the first stop, Rockway Glen Wineries, we enjoyed some great driving roads in southern Ontario. For me one of the thrills is seeing the reaction from other drivers and bystanders as they watch a chain of sports cars making their way through an intersection or pass by their house. It always seems to put a smile on their faces and they honk or give a wave.

We turned into Rockway Glenn Wineries and parked our cars in the circular drive where the staff were finishing up with the group ahead of us. We congregated downstairs where there was a small museum stocked with various wine making paraphernalia from over the century. After a quick, informative talk about wine in general, we were offered a sampling of two Rockway wines.  At this point we drew our next two cards for poker, an ace and the 9 spades. Not great, but if we were lucky could turn into something. 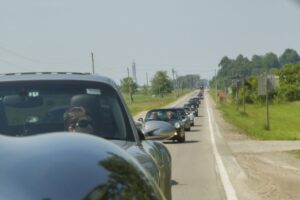 Back on the road we snaked around and made out way to Vaughn’s home where he had planned a catered lunch. His backyard was well-sampled with about 25 Porsches from the earlier groups which provided a nice view as we ate lunch. When we arrived we drew our final two cards, a 9 of diamonds and the queen of hearts, three of a kind. Porsche Canada kindly donated some prizes and after lunch we found out that our three of a kind was not quite enough for one of the five prizes.

All in all it was a great day. The people were friendly, the cars were gorgeous and the roads were spectacular. Thanks to Jennifer and Vaughn for a well-planned and well-executed run. 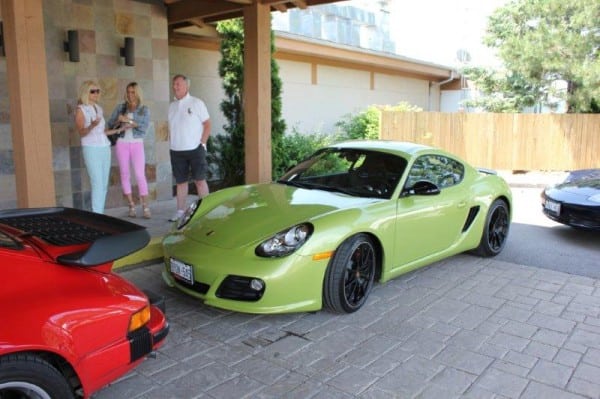