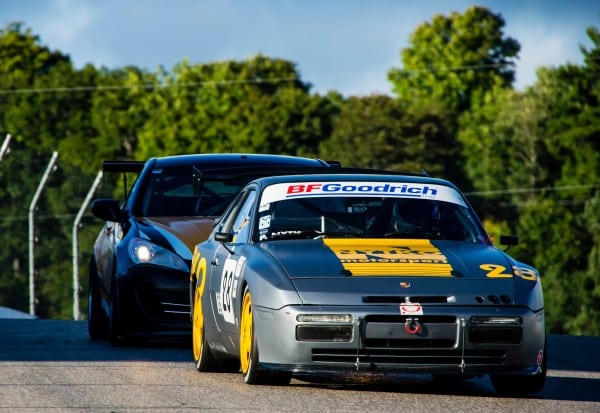 As I sit now with the past season in memories, I thought I’d share my experiences of racing an older 951 against much newer cars in the CASC (Canadian Automobile Sport Clubs) GT Challenge series.

With winter coming to a close and the race season fast approaching it was time to come out of hibernation and get cracking on the race car.

The 2013 season was plagued with ECU chip problems so the major item on the to-do list was installing a standalone programmable ECU. Having worked with an SDS (Simple Digital System) before, my choice was easy. Their systems, as the name suggests, are simple, easy to use and product support from Alberta is superb. Having a bit more than a month to go before the first race the fabrication pace was a bit crazy but that’s what I get for being lazy throughout the winter.

Progress went well and with one week to go I was tuning at TMP (Toronto Motorsports Park). It was cold (3°C), wet and the track marshal looked surprised that anyone actually wanted to use the track. Getting this close to the first race, bad weather could no longer be my excuse so I pushed on with the less-than-enjoyable testing session, not knowing it was a prelude to my first race.

With the race day approaching and looking at the weather forecast it was becoming clear that the chances of a wet race were rather good. Not having proper wet tires I did some research and opted to get a set of Continental race wets though one of the racers on the CASC forum.

Race 1 – A wet and cold Mosport I go out for first practice on the wets armed with confidence from the tire reviews. A bit too much confidence; as I perform pirouettes at corner one and luckily miss the wall and other competitors. Thinking that the reviews were highly exaggerated I try a set of street tires for my qualifying.

The first lap brought the quick realization that these were even worse, with the car feeling like it was on ice. So two laps into the session I pull back in the paddock to ensure I have a race car to race. The next few hours Dan (my crew chief) and I were looking up at the sky and getting a workout by switching tires. With 15 minutes to go the seemingly good idea to put slicks on was quickly becoming questionable. So it was back to wets and straight to the mock grid. Waiting on the grid, the rain started; I was happy we made the right tire choice.

Starting from way back thanks to my stellar qualifying, my goal at this point was to just finish. The race went well, staying wet the entire time and with all the commotion I didn’t even keep track what place I was in. So it came as a huge surprise to find out I finished in third–a gratifying first weekend.

Equipped with some new aero work and trying new Toyo RR slicks, I hit the track. These tires are much more predictable than the Hankook Z214 I used previously, but the ultimate grip is a bit low, resulting in some understeer.

The morning went well and everything pointed to a promising race but that changed about 11 laps into the race. Exiting corner two wide I hit the outside turtles and suddenly major steering vibration. My first thought was a cut tire, but the vibration became worse and I had to park on the outside of turn three, far away from the track to avoid disturbing the race. Out of the car for a quick diagnosis and it was a ball joint failure.

It was actually a ball joint extender that sheared. Body damage was minimal;, just the fender opening bent in–not bad considering failure happened at 160 km/h. A control arm update was on my list, but the available options are only 1.25 inches longer, providing no actual geometry correction for me. I ended up trying a ball joint extender but that didn’t work too well. With no option to purchase a solution I chose to fabricate one. With some homework, three weeks later I had my prototype part on the car. Steel tubular uniball control arms with proper geometry correction, now to see how they work.

Seeing as no one in my class was running DOT slicks, I pulled the trigger on a set of Hoosier R100s. With the new slicks and control arms I started my practice. The grip was simply amazing, the new control arms worked great with the uniball joints providing a more precise feel. Overall, the weekend went well, with clean racing and a third place finish, closing up the gap in terms of lap times to the front runners. My best was now a 1:33 at Mosport, and still room for improvement with the driver. 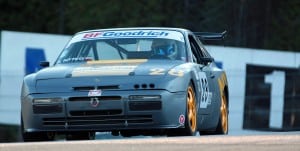 Leaving a bit later than planned we arrived at the track at 1am. When we left Markham Dan asked me if the gates to the track close at night. My response: “Why would they?” Well they do!

So arriving at the gate there was not much else to do but sleep in the Cayenne. In the morning waking up to a bunch of mosquitos finding their way in to the car thought the sunroof was awesome. Guided by the track officials, we enter the paddock looking for a spot. The tight Calabogie paddock was packed with a record number of competitors (around 200). Still half asleep wedging the trailer into the tight sport we were given I decided to measure how far we move to the left. This apparently looked like me failing a sobriety test as pointed out by a fellow UCR member. (Editor’s note: Who, me? I didn’t know you had slept in your Cayenne!) 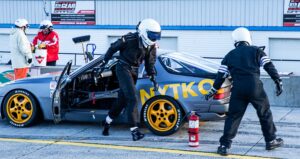 Getting ready to refuel

Settling in, we had a game plan. With practice and qualifying grouped into a single 40-minute session, the decision was to stay out for the entire time to learn the track. Going out, I found the track slick. The surface provided little grip, much less than CTMP and even less than TMP. This caused some early accidents and the 40 minutes was narrowed down to maybe five hot laps. So much for learning the track. The race went clean with a decent finish considering the circumstances, fourth place and now third in the championship points race.

Race 5 – The big test of a three-hour race

Before the three-hour endurance race, my homework consisted of finding the quickest possible way to refuel and minimize pit stops. The strategy was in place and we were ready for the challenge. The morning saw a wet start, but practice went well and I qualified P2 in the GS class (P3 overall). Officials called all the cars to the impound for a dyno and weight check. The P1 car in GS had too much power and lost its spot, bumping me to the front row. This process took two hours and we now had to rush to make it for the race. Pulling up the gear to pit lane made one thing clear–I need a proper pit cart for the next endurance race.

With rain clearing we started on slicks, with a strategy to conserve fuel and only do a single stop. The first stop went clean and as planned at about one hour and 25 minutes. The plan was working, or so we thought. At about two hours it was clear that for some reason my fuel was low and I needed to come in for another pit stop; so much for the plan.

Now this is something I didn’t know until after the race. As I did my laps I saw that Dan was missing from the pit wall… hmm, strange. Well what happened is that to be safe (and luckily so) he went to get more gas. But the gas station at the track closes at 4pm (WHY?!), so he ended up going off site to get more fuel. Thanks, Dan, for thinking ahead. At 2:25 it was time for the unscheduled pit two, and again it went smoothly and we were back on our way.

Three hours of solo driving with not a single yellow, a compromised fuel strategy and we finished second in GS, and fourth overall. A good result. An investigation later revealed that a fuel leak at the filler neck caused our unexpected fuel stop–oh well, that’s racing.

With the championship standings locked by now, it was time to be a more risky and push more. With good weather and feeling a bit braver, I qualified with a 1:31.7, good for a P2 on the grid. The race started with a good battle for first, but pitting in at the half-way mark for my mandatory one-minute stop, the officials saw some smoke coming from under my car.

In previous sessions cars spread oil on the track and the marshals were ultra-sensitive to the situation, and stopped me from proceeding further. Not very happy, but I had no choice. With the 944 exhaust design running under the engine, it doesn’t take much for a small amount of oil to cause smoke on a stationary car. I guess it is an older car after all.

All in all it was an exciting and busy 2014 race season in an old, yet still competitive, 1986 944 Turbo. We raced to a second place in the championship. It’s truly a testament to how advanced these cars were in the 80’s.