A Tale of Two Turbos 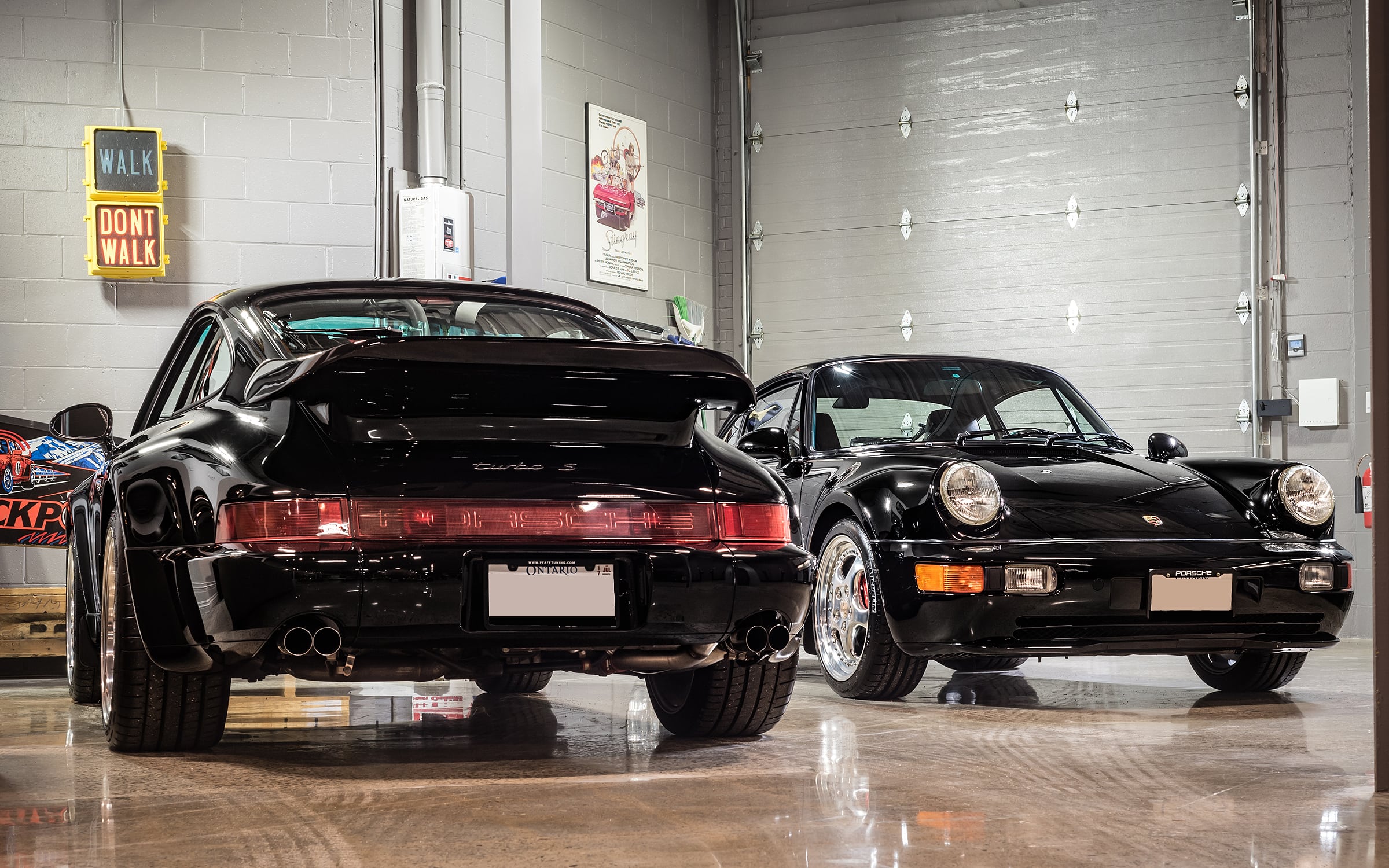 Story and Photos by Elliot Alder, Provinz Ad Manager and Contributing Photographer (from May 2017 Provinz page 16)

Some time ago, your intrepid author was sitting outside Ferrari of Ontario in a humble little 944. I’d just left a coffee date with former Toronto Star auto journalist Laurance Yap, and thought I would swing by to see what raucous Italians were on display around the corner from Pfaff. I’d taken a few snaps and headed back out to the car to select a playlist for the journey home, when a smiling man came up to my window to chat about the 944. This curly-haired stranger had just purchased a 944 of his own, and though he was there picking up parts for his 512 BBi, he seemed more excited to be sharing photos of his 150hp 4-cylinder with a fellow enthusiast. The condition of the car was impressive, but it was the faint silhouette of something else in the background that caught my eye. I didn’t realize it at the time, but what I was looking at was in fact one of the rarest Porsches in existence.

It will never be possible to crown any one generation ‘the best’ of the 911 series, but the 964 and 965 certainly have some impressive credentials. At a superficial level, the 964 brought a breath of fresh air to the lineup after fifteen years of the G-series design. Boasting Porsche’s first production all-wheel drive system and with more than eighty percent of its components being completely new designs, the 964 was a major technical step forward for the brand. Aesthetically as well, the shedding of the infamous bumper accordions, new electronic rear wing, and smoothing of the tail end finally brought the 911’s design up to date. Greater still was the introduction of the 964 Turbo (known internally as the 965), the successor to the yuppie-mincing 930. As memorable for their qualities as for their omissions, the turbocharged 3.3 and 3.6L versions of the 965 were especially important as the last of Porsche’s truly classic beasts. Easing the 930’s harsh lines without sacrificing its fearsome stature, the turbocharged 964 offered a thrilling driving experience in a (slightly) less deadly package. The engines’ increased displacements smoothed the torque curve in the low end, at once easing the jarring violence of the 930’s slow turbocharger and lifting power output across the band. Refinement needn’t forsake the Turbo’s reputation for ferocity, however, and the 965 balanced this step toward linearity by maintaining the 930’s bratty rear-drive configuration. 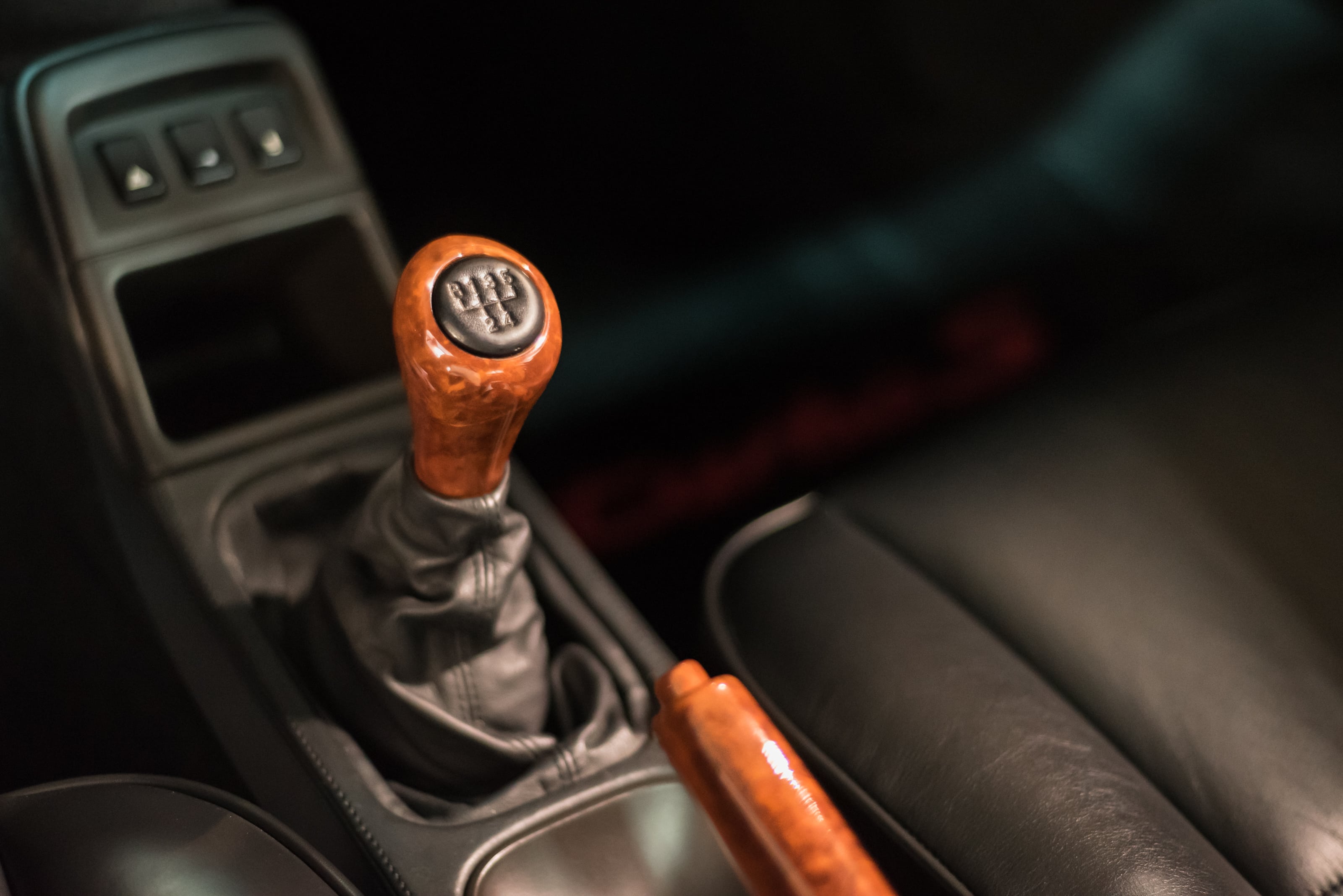 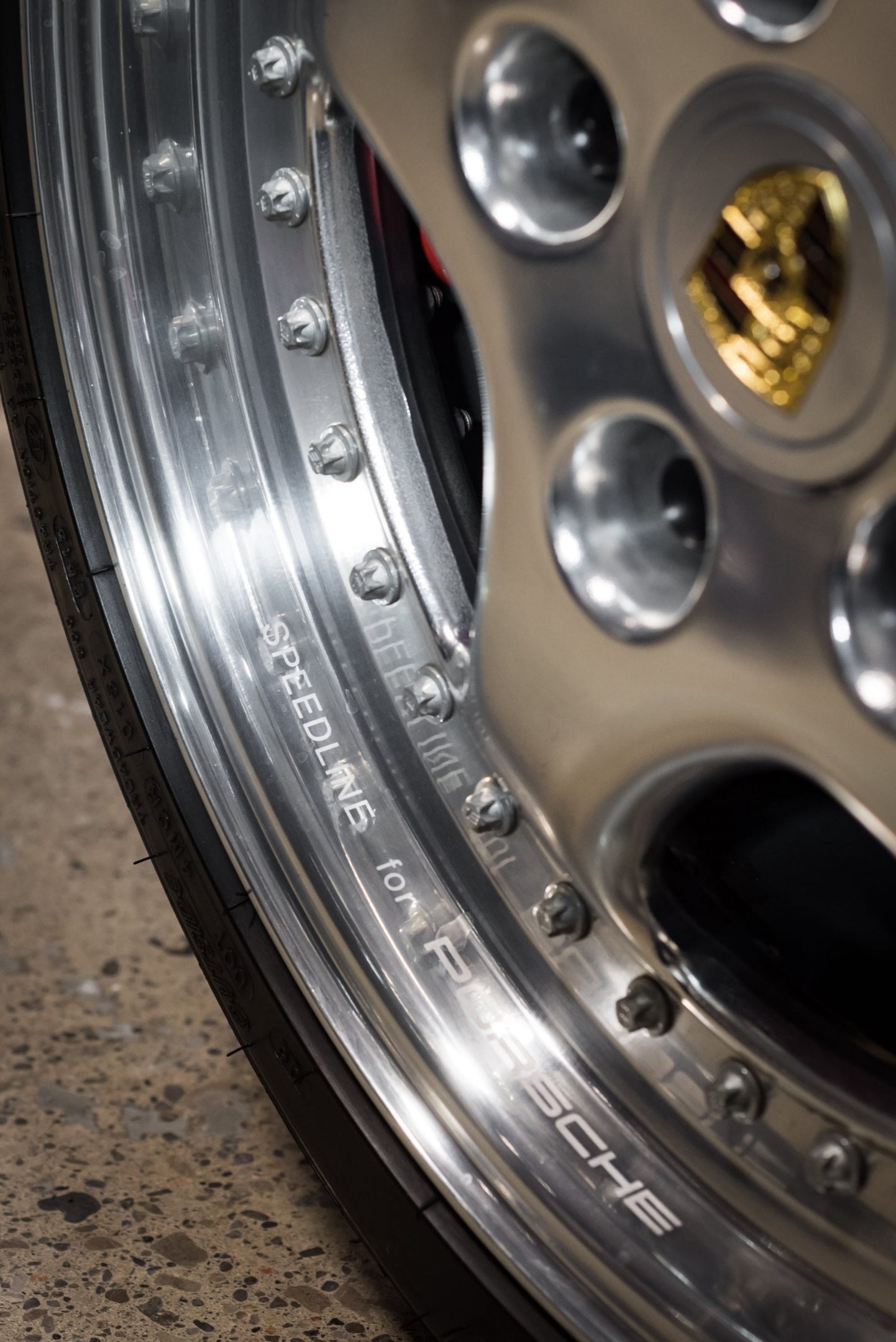 “Both are the same underneath, though Doug insists that his is faster – because he actually drives it.”

The 964 was phased out in 1993 to make way for the smooth new 993, but Stuttgart wasn’t quite done with the last of the stiff-nosed 911s. With ninety-three unfinished chassis still laying in wait, Stuttgart turned to the team at Porsche Exclusive to give the 964 one last hurrah. Under their loving care, these shells were hand-crafted into the mightiest road-going Porsche yet – the Turbo 3.6 ’S Package.’ Of these, a number were ordered in the optional $65,000 ‘X85’ slantnose configuration. Pulling the pop-up headlights and front quarter panels from the 968, the X85 smoothed over its ancestor’s fender vents for a streamlined design more closely resembling the incoming 993 than the old 930. The ‘base’ 964 Turbo’s characteristic stance was maintained with the only the minor addition of fog lamps, asymmetrical rear fender vents, and of course a sweeping ’S’ on the deck lid. Underneath, the venerable G50 5-speed remained, this time channeling an increased output of 385bhp. Of the 93 ’S’ cars, 76 were ordered with this flagship option while only a few were delivered with the standard 911 nose – one of which was in his own garage.

A few months after my encounter at Ferrari, Provinz’s Editor introduced me to a pleasant man named Doug and a familiar but implacable friend of his in a warehouse full of 911s. Almost immediately, my eyes darted to the 965 in the room – a black Flachbau with gleaming 3-piece Speedline wheels and nary a scratch to be found. At this point a phone came out with a familiar image of a matching car onscreen. As it turned out, this friend was the curly-haired man from Ferrari, and the 964 I had glimpsed that day was one of just seventeen.

For any readers who missed Black Apples, Black Oranges in the March issue of Provinz, this series explores the unique black-on-black flagship 911s that adorn the incredible garages of two childhood friends-cum-UCR members. Between them, Doug and Rob own two of the ninety-three 965 3.6 S models, as well as a pair of immaculate 930s, a 993 Turbo S, and a 996 GT2 – all finished in classic A1 black. Like many enthusiasts, the two present themselves less as owners than as their cars’ current caretakers and have invested significant energy in their preservation. With so few X85s and even fewer ’S Packages’ built, they are confronted with the dilemma of whether to enjoy these classics on the road or merely under the warm glow of incandescent lights. The rarity of these cars cannot be overstated, and Doug and Rob are both acutely aware of their responsibilities to them.

“Why don’t you drive your cars?” Doug asked Rob as I unpacked my strobes.

“Why do you drive your cars?”, Rob retorted. 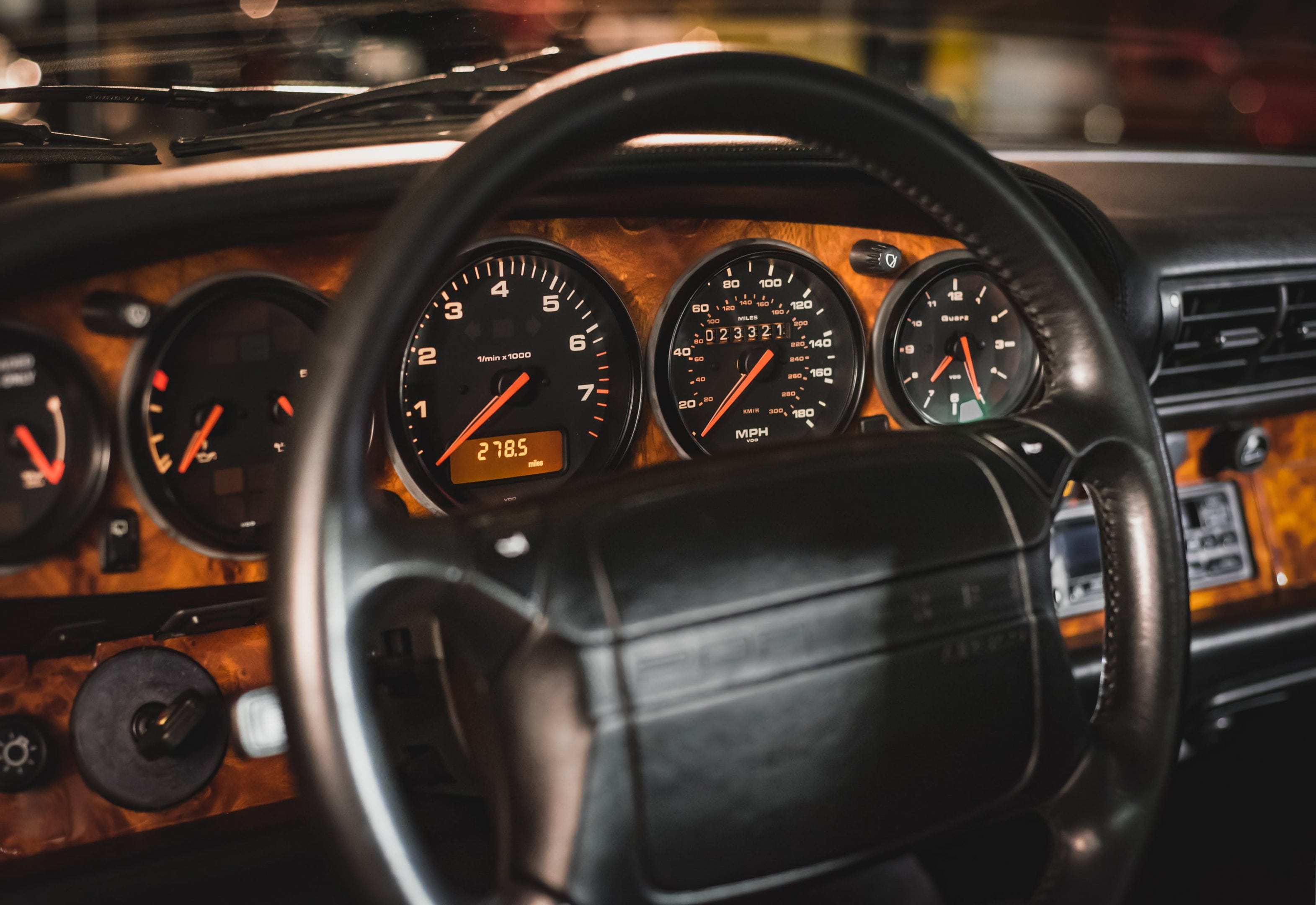 Of all the cars in their collections, the 965s are by far the most unique. Not only were fewer 964s given the Turbo treatment than any other generation (almost a thousand less than even the 993, in fact), but the scarcity of the 3.6 S coupled with both cars’ specification and condition makes for an exceptional pair. Doug’s X85 is just 3,000 miles from new, making it a true top-tier collector’s piece. Rarer still is Rob’s traditionally bodied (but fully-loaded) Turbo 3.6 ’S Package,’ one of only fourteen remaining and the only one produced with a beautiful walnut interior.

Given this, it may not be surprising that these cars only emerge from their garages on special occasions. Doug is not one to let such vehicles sit idle for too long, however. When he does lift the garage door, he never just drives a 911 Turbo – he drives the 911 Turbo. For him, none of these cars exist without the others; beginning with the 930 and carrying straight through to the 997, Doug makes a grand weekend of their every outing. Where most drivers focus explicitly on the thrill of the moment when driving these cars, this unique approach engages with the cars’ greater lineage as one of motoring’s quintessential evolutionary designs. Following the Turbo’s history from the cockpit of the finest incarnation of each not only affords hours of exciting flat-six goodness, but it also allows him to intimately experience the ongoing narrative of the 911.

In contrast to Doug’s covered-until-redlined approach, Rob likes to experience his cars as great pieces of art. Though he takes them out for the odd breath of forced air, the majority of their time is spent finely polished on a warmly-lit display. His space is sleek and stylish, with a generously-stocked bar fridge and small humidor completing the lounge. The floating wall panels are adorned with assorted automobilia, while a tidy workbench and cabinet keep various tools and detailing supplies tucked away. The 3.6’s subtle black paint may not stand out as much as the Ferraris’ warm hues, but this terror stands on a pedestal at the very front of his garage for good reason. For him, the Turbo 3.6 S holds a special significance as both a long-time ‘grail car’ and the beginning of his now-sprawling collection

These two approaches raise an important question for the enthusiast: is it acceptable to endanger a car as special as one of these on the open road, or is it a greater sin not to drive them as intended? Many of us joined PCA for the love of driving, and the thought of such exciting cars as these being bound to lives on hoists and trickle chargers can sting a little. Doug and Rob obviously lean toward the conservative end of the spectrum, but it is important to remember that this is more out of historical respect than straightforward investment concern. Despite their breathtaking potential, these are priceless vehicles that have survived in astonishing condition for up to 30 years; for all that it may seem blasphemous not to drive the wheels off of an enthusiast car like a Porsche, a limited-run 965 3.6S is not a $7,000 944.

Porsches are built to go fast, but that does not mean they are obliged to live their entire lives at 7,000 RPM. More than just toys for ceaseless exertion, pristine examples such as these are monuments to the automotive technologies that rolled off the line all those years ago. Some of us will drive our cars into the ground, but 40 years from now it will be the pampered cars such as these that will come out and remind us of Fun Runs past. 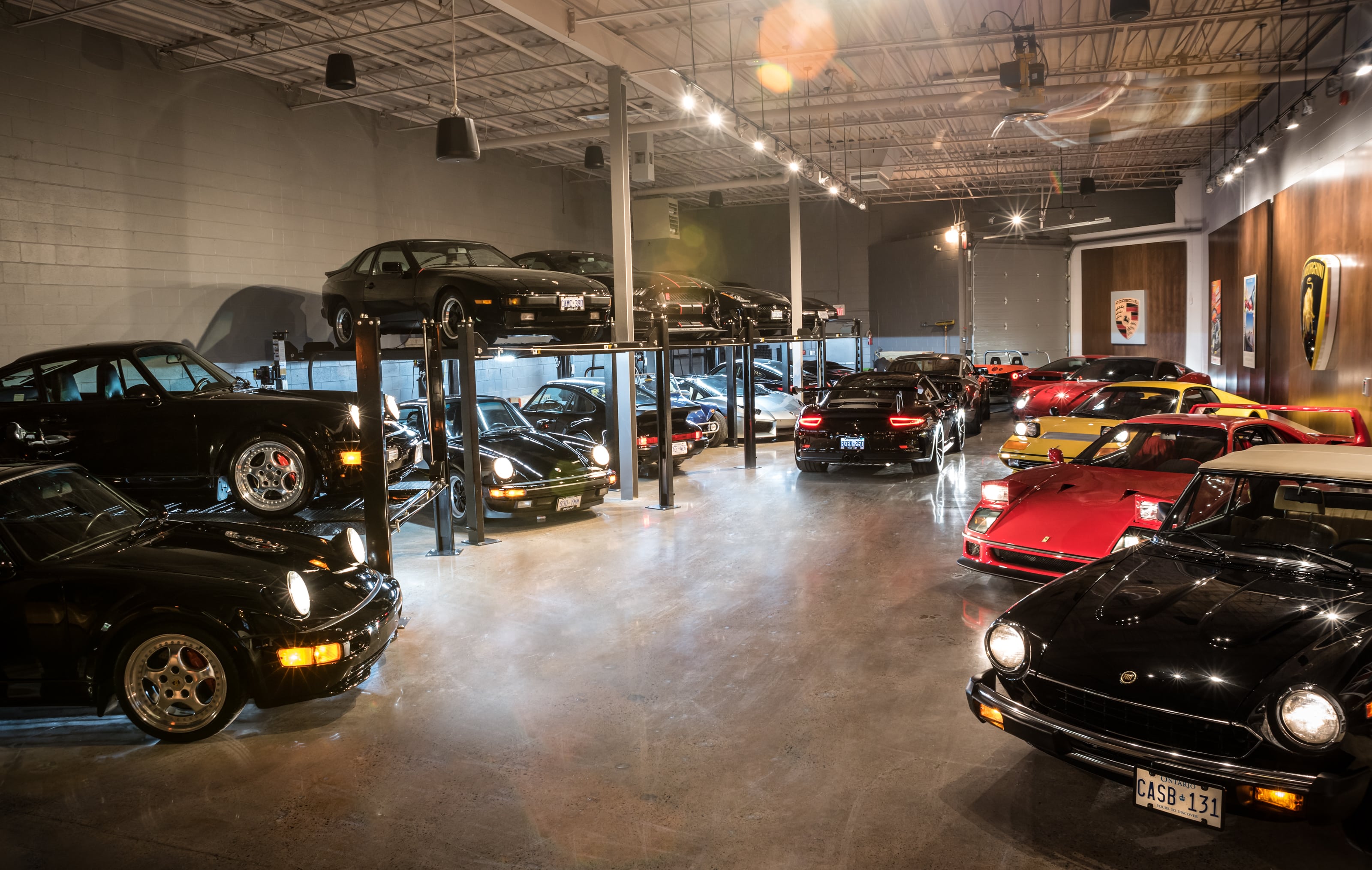