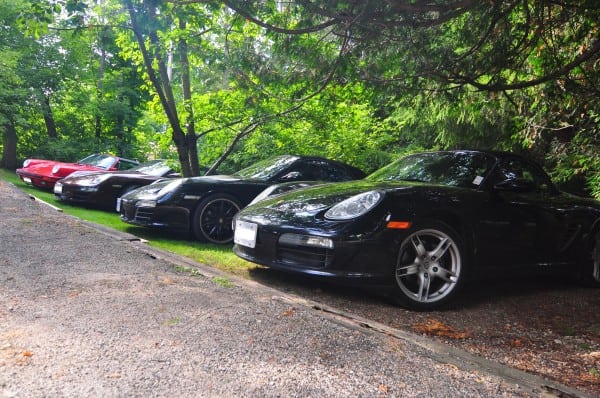 On Saturday, July 26th, a sleepy-eyed group of PCA UCR members made their way to registration by 9:30am at Tim Hortons at the corner of Hurontario Street and Mayfield Road. Why? For the Blue Mountain Lakes and Rivers Fun Run. Although there was rain in the forecast, even the weather cooperated.

This year’s Blue Mountain Lakes and Rivers Fun Run sold out within weeks, with many PCA UCR members coming on a Fun Run for the first time. They were not disappointed. Once again, organizers Hazel de Burgh and Don Lewtas delivered a stunning 220km route that meandered through some of Ontario’s most beautiful countryside. With 30 cars registered, including seven new teams, this fun run was going to be fun and competitive! After a short but informative briefing, the first group set off, led by a white 911, and the second group set off about 15 minutes later, led by a silver 911. There were five decades of Porsches following closely behind, including more 911s, a 912, a 930, several Boxsters and a Cayman. 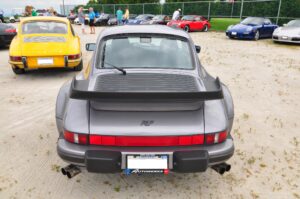 The winding 220 km was divided into 3 Routes: A, B and C, with quiz questions and related clues, such as “How many times did we cross the Pretty River on our route, and on what leg (s)?”; “What is the name of this lake (photo) and what leg is it on?” and “What river is River Road on?” Except for being grouped according to Route A, B, or C, none of the clues was in order.

Each team also had a set of driving directions, including safety warnings (in red) and social notes (in green). One had to pay keen attention to get the directions and the answers right. Having a good navigator was a must…or at the very least, one who enjoyed the scenery and the ride. 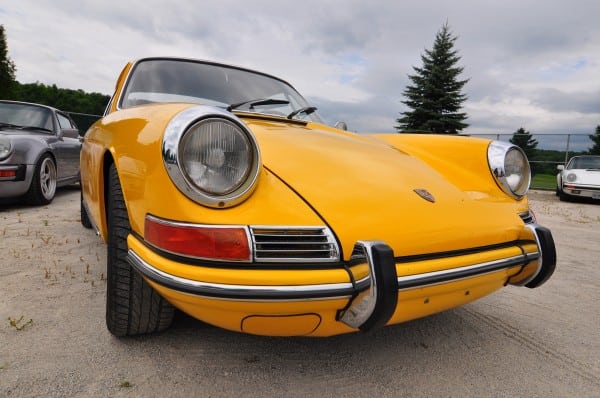 The first route of 14 legs and 60km took us from Tim Hortons, along winding roads and bridges, past the Ontario Badlands and along the Forks of the Credit River—right to the heart of Hockley Village—where we stopped at the General Store for a quick 15 minute break. Teams could be heard muttering how challenging this year’s fun run was as they stood in line for coffee and fresh pastries: this year one needed extra brain-fuel to get all the answers right!

Our second route had us heading towards Duntroon Highlands Golf Club, for a buffet lunch, a mere 84.9km away from the Hockley General Store…with 19 legs to navigate, questions to solve and clues to look for! Lunch saw the two groups of Porsches reunited for not only a photo op, but a chance to score some quick (and not easy) points: “What’s the most popular colour for Porsches on this fun run? And how many are there? (The colour choices are: black, blue, green, grey, red, silver, white or yellow). This led to a lively, spontaneous debate: Is that Porsche silver or grey? 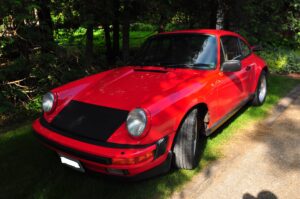 Our final route of the day took us from Duntroon through the hills and valleys of the Blue Mountains, and included some breathtaking vistas of Georgian Bay. With 21 legs, Route C had the groups travelling 74km, into the Town of Clarksburg, to the charming and welcoming seasonal home of Hazel de Burgh and Martin Tekela: “Beaver Lodge”. 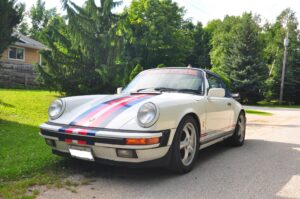 As the group socialized, some commenting this was the most beautiful yet toughest fun run to date, a smaller group carefully tallied up the questionnaires. With a score of 62 out of 80, the winning team was Chris Root and Debbie Fleming!