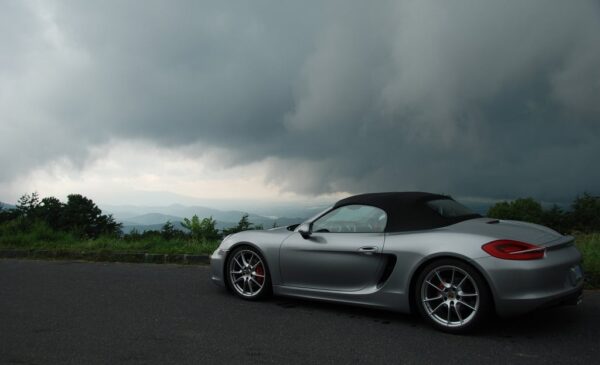 Ever since buying my first Porsche, a Boxster, in 2006 my wife, Michelle, and I have enjoyed taking it on at least one road trip a year. 2013 was no different, except for one detail. On July 25, Christmas came five months early for me as I took delivery of my new 2014 Boxster S, which I had custom-ordered several months earlier. By the third week in August, I had just finished with that agonizing, 3,000 km of break-in period. On this trip, I would be able to enjoy the full sound of the Symphony in Flat Six as it crescendoed into the 7,000 rpm range.

Since 2007, we have attended the Blue Ridge Boxster Summit held in North Carolina at the beginning of June every year, a gathering of some 150 Porsche enthusiasts from all over the Eastern US and Canada. Having attended BRBS in June, we decided that this year’s other road trip would be to the Skyline Drive, which starts at Front Royal in Virginia and runs for 105 miles through Shenandoah National Park, ending near Waynesboro, VA. From here, we would start at the northern entrance of the Blue Ridge Parkway which runs through the Blue Ridge Mountains of Virginia, North Carolina and ends at Route 441 in Tennessee some 470 miles later.

Thursday, August 22nd started as a sunny, warm day, perfect for topless driving. CURVEN8R 2 was packed, fuelled and ready to go. Crossing at Buffalo, we followed Route 219 south through New York state, passing some quiet towns like Ellicottville and Salamanca. We crossed into Pennsylvania, passing by Bradford, before making a stop for lunch at Kinzua Bridge State Park. When built longest rail viaduct in the world. Part of it was destroyed by an F1 tornado in 2003. The state has repaired part of the structure and created a skywalk for a scenic overlook of the valley below. 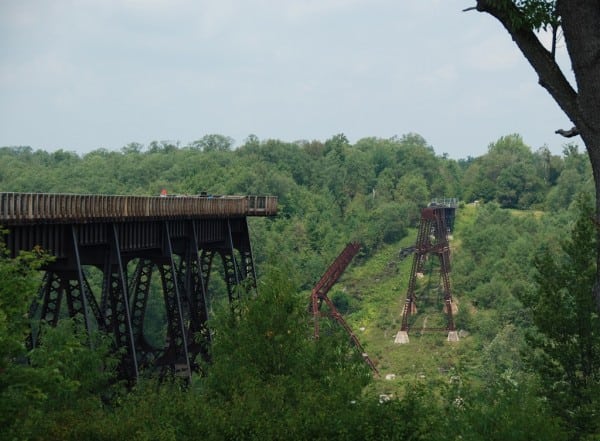 Shortly after leaving the park, we ran into some heavy rain. That continued on and off for the rest of the drive that day. That quick nine seconds to open/close the top sure came in handy a number of times, since I don’t like to drive with the top up unless it’s pouring rain. I even had a few chances to bring the whole orchestra into a full crescendo near redline, punctuated by the burble that the 981 emits with each up and down of the smooth-shifting six speed gearbox. And, it is all enhanced by that sport exhaust, creating a fabulous soundtrack to enjoy on the road. As we reached the end of our first day in Front Royal, I had that little feeling of disappointment when the day’s drive is done. But, there was more to come during the following days.

Second day started nice and sunny, so I grabbed my bucket and sponges to give CURVEN8R 2 a quick bath. We were looking forward to this drive. With its 35 mph speed limit, there would be lots opportunity to enjoy the scenic views. I came back in, got ready and had breakfast. We came out to leave and it was pouring rain. We packed the car under the entrance roof and started off. Unfortunately, our trip along Skyline Dr. was like driving through a carwash. It did show one thing, however, and that’s just how water tight the Boxster’s roof is. Not a drop of water anywhere in the cabin, except when we opened the doors to get in or out. We did manage a couple of stops during a lull in the rain to snap a few pictures.

As we drove from Skyline Drive onto the Blue Ridge Parkway, near Waynesboro, VA, the roads gradually started to dry, allowing us to enjoy the scenery of the mountain road and leaving the rain behind us.

Eventually we reached the end of our second day’s drive in Roanoke, VA. 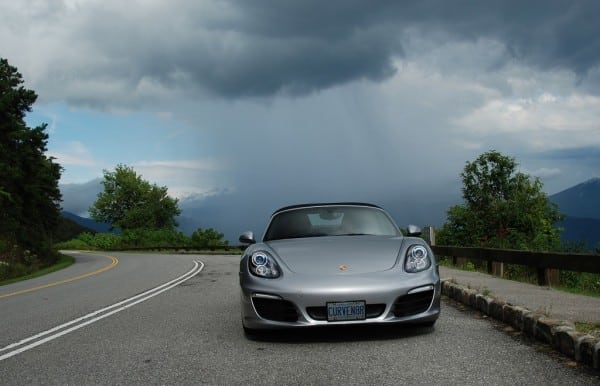 The third day of our trip started out sunny and warm. With temperatures climbing into the 30’s, it was an excellent opportunity to try out the vented seats I’d ordered with the car. They sure keep you comfortable when it gets hot and humid. My wife absolutely loves that feature. 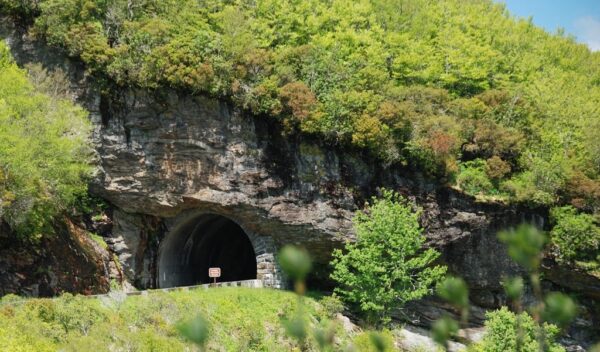 With the BRP’s 45 mph speed limit, and overlooks every few miles, there are lots of opportunities to stop and enjoy the majestic views. Occasionally, the Parkway passes through a tunnel, allowing one to create a little magic with the conductor’s wand under the right foot. On one occasion, while I was getting some drinks from the cooler in the front trunk, a kind couple pulled up in their SUV and asked if we were having car trouble. I looked up and realized my wife also had the rear trunk open to get something from there.

“No”, I explained, “the motor is actually in the middle of the car.”

“Ah!” said the husband, “I should have known. That’s a Porsche isn’t it?” That led to an interesting conversation about the Boxster. While my 987 often got compliments, this 981 seemed to have someone come over to ask about the car whenever we stopped. It really is an attention getter.

As the third day drew to a close, we reached Little Switzerland, the only place that is actually located right off the Parkway. This has been the meeting place for the Blue Ridge Boxster Summit for the past few years. During BRBS, there would be some 90 Porsches, mostly Boxsters, here. It felt really strange being the only Porsche this time around. 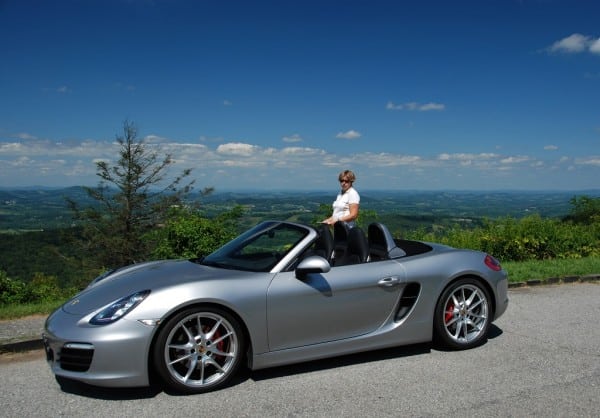 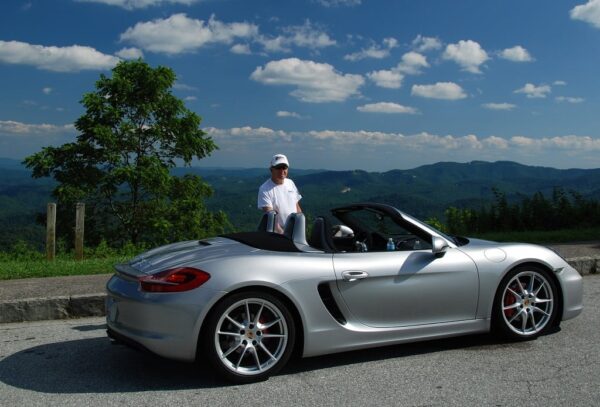 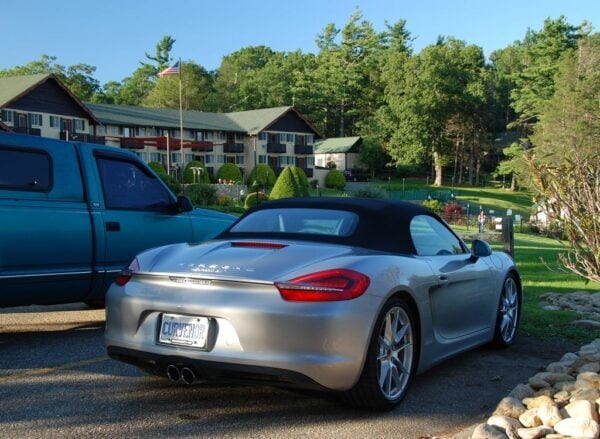 The fourth day, another sunny warm one, we had to leave the BRP because of repairs being made along the next stretch. That gave me the chance to try out the X73 option (Sports Chassis) on NC 226A, also known as the Diamondback, a twisty road, that is located on the doorstep of Little Switzerland. I actually prefer this road to The Tail of The Dragon. Having driven 226A before, I had a chance to compare the 981’s handling to that of my 987 with stock suspension. This car just handles the corners like it’s on rails, and the whole thing is made even better by the Sports Plus seats that hug and keep you in place when cornering. At the same time, the ride on rough surfaces is about as compliant as my old 987 with its stock suspension. Even my wife has commented, “Doesn’t this car ever lean?” Porsche really has done amazing things with the chassis and suspension of this car.

On reaching Ashville, we were able to return to the BRP and enjoy the mountain views and animal life along the way. This southern section has more tunnels than the rest of the parkway. It also has the highest point of the parkway at 6,000 ft above sea level. Lots of elevation changes in this last section allowed us to really enjoy the views with the sound track of the Symphony in Flat Six rising and falling in unison. Too soon, we reached the end of the BRP at Route 441 in Tennessee.

We followed Route 441 which winds its way north through Smokey Mountain National Park until we reached Gatlinburg, Tennessee, continuing on through Pigeon Forge and ending our shunpiking by taking I-81 north to Kingsport, TN, our destination for the fourth day.

The fifth day saw us headed back toward home along US 23, a scenic divided highway which took us north to Charleston, West Virginia. From here, we took I-79 north to Pittsburgh where we stayed overnight with good friends we met at BRBS. 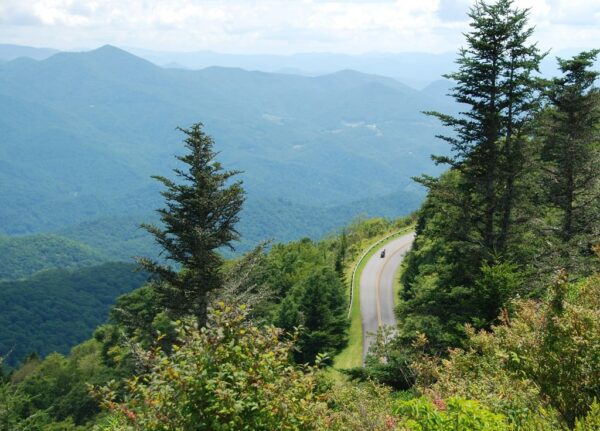 On the last day, we headed north on I-79 until we got off at US 62 for some more shunpiking along the western edge of the Allegheny National Forest. It’s a nice relaxing drive with scenic winding roads. We finally reached Buffalo and crossing over the Peace Bridge for the last leg of our drive on the QEW and back home to Kitchener.

I just can’t think of a better car than the Boxster in which to take a trip like this. Its open roof allows you to enjoy the sun and scenery, to the sound of the flat six. And, it’s a blast to drive through the twisties. There really is no substitute.