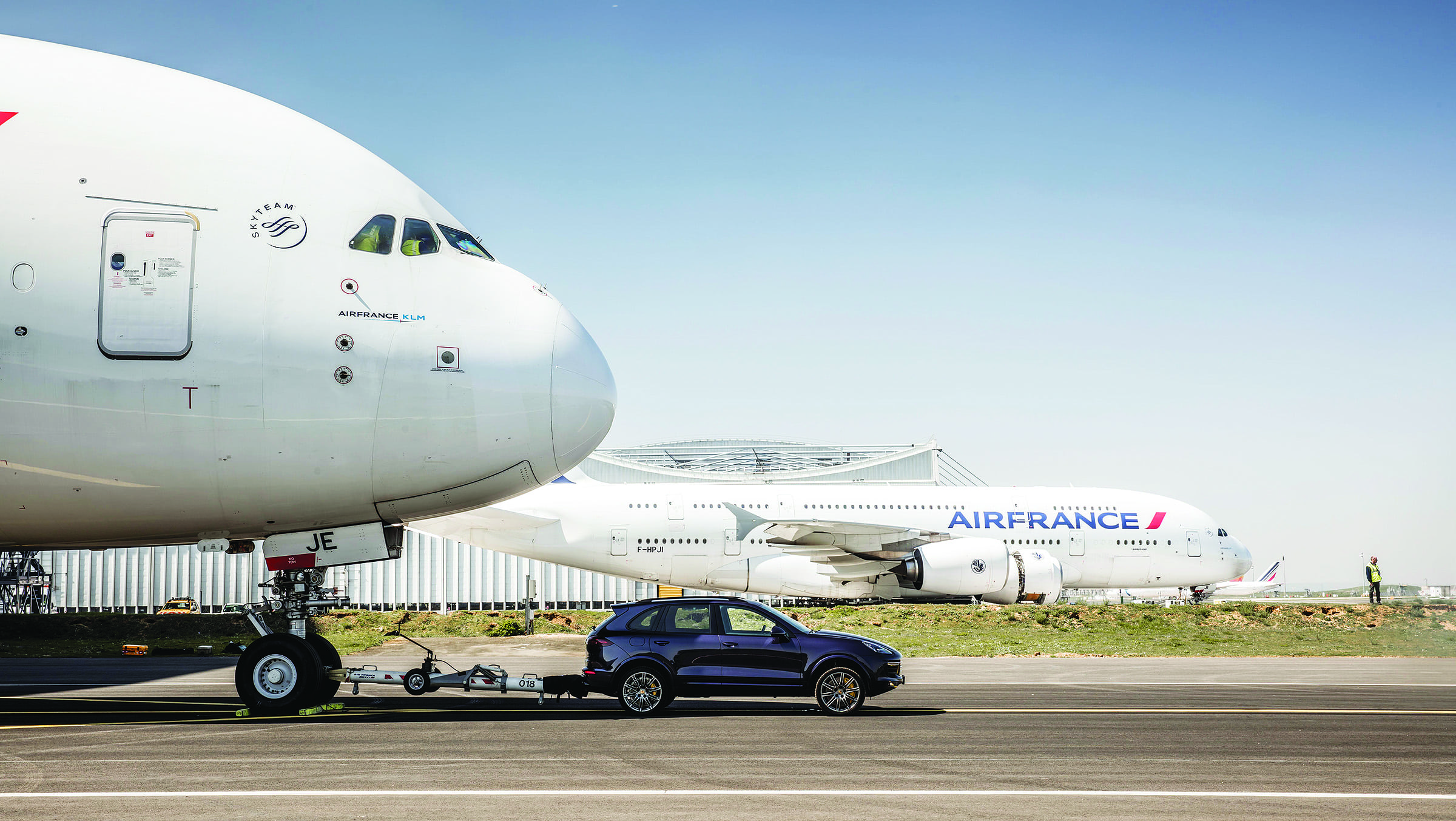 Who would have thought that a Porsche might be involved in a Guinness World Record attempt that didn’t involve speed? Well, that’s exactly what happened recently when Porsche Cars Great Britain set out to break the “Heaviest aircraft pulled by a production car” record.

The only important performance number for any vehicle considering this feat is the torque figure, so a completely standard Cayenne S Diesel with 625 lb-ft of torque and a Turbo S with 588 lb-ft of torque were selected. They were both driven from the UK to France for the attempt, held at the Charles de Gaulle Airport in Paris on April 21.

Air France devoted its state-of-the-art engineering hangar and one Airbus A380 aircraft from its fleet of 10 to the project. At 645,835 sq. feet, the hangar is large enough to house over 3,000 Porsche Cayenne, or one very big aircraft; weighing in at 285 tonnes, the 73-metre-long Airbus A380 is the most sophisticated and largest passenger aircraft in the world. A Porsche Cayenne measures only 4.8 metres in length, so the contrast between the two machines was striking. 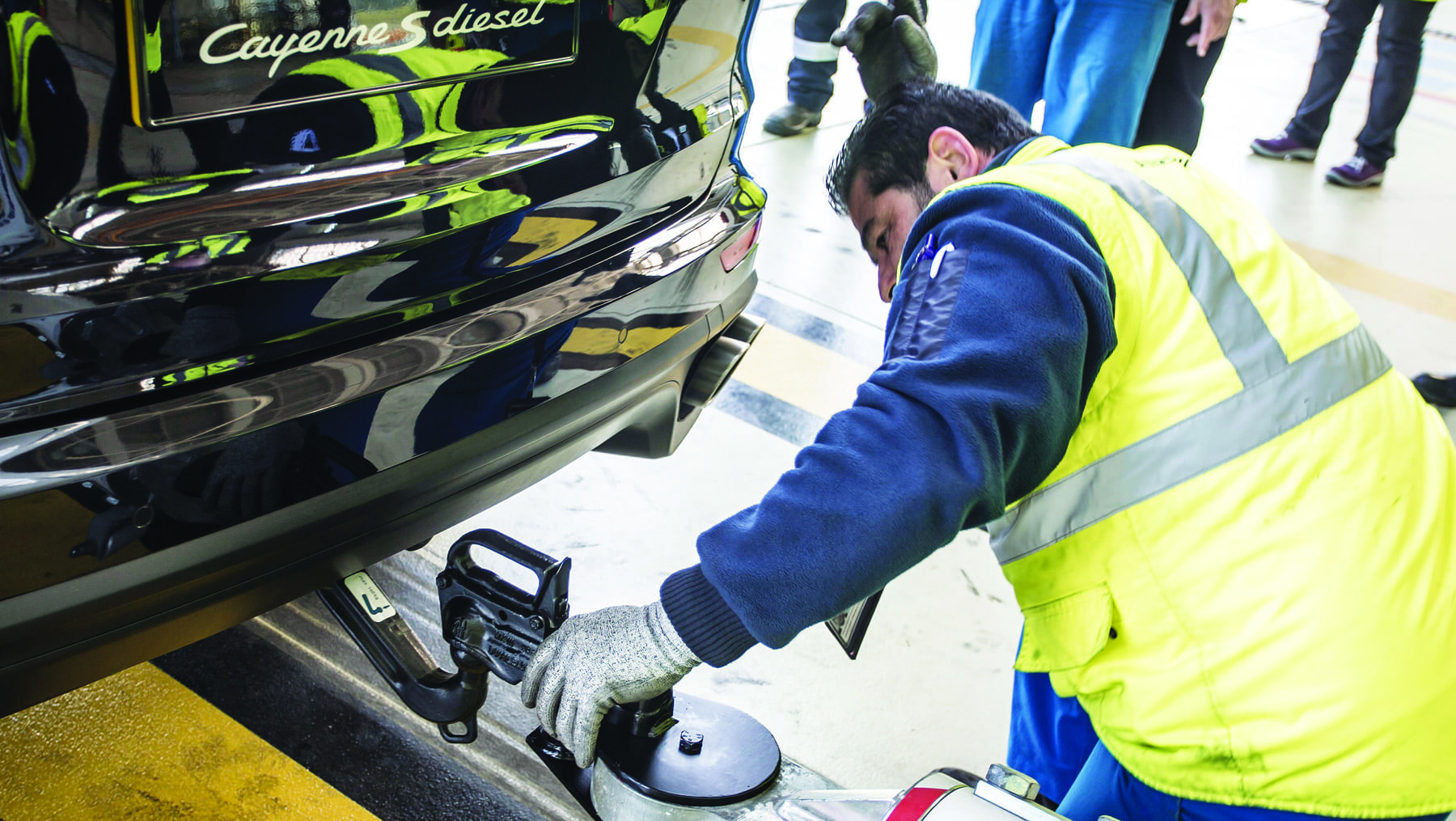 The A380 would have to be towed at least 100 feet (30.48 m), the standard required by Guinness, in order to break the existing world record of 170.91 tonnes, achieved by a Nissan Patrol, in 2013. A special towing attachment was mounted to the Cayenne’s standard tow bar for the attempt. Driven by Porsche GB technician Richard Payne, the S Diesel went first, towing the aircraft out of its maintenance hangar for a distance of 42 metres (138 feet) – a new world record by a margin of 115 tonnes! The Turbo S then repeated the feat. A Guinness World Record certificate commemorating the accomplishment was then presented to Porsche Cars Great Britain, accepted by Payne. Payne stated: “Our cars can go a bit beyond what our customers might expect”

Payne also said: “It did it – I’m so relieved! We don’t usually go this far to test the limits of our cars but I think today we got pretty close. I could tell that it was working hard but the Cayenne didn’t complain and just got on with it. My mirrors were quite full of Airbus, which was interesting. Our cars can go a bit beyond what our customers might expect – they’re designed to be tough. But even so, what the Cayenne did today was remarkable – we drove the car here from London – and I plan to drive it back home again, having towed an A380 in between. Credit should go to the team in Stuttgart who developed the car – they did a thorough job. I’m also very grateful to Air France and its engineers for their generosity in allowing me to tow their beautiful aircraft.” 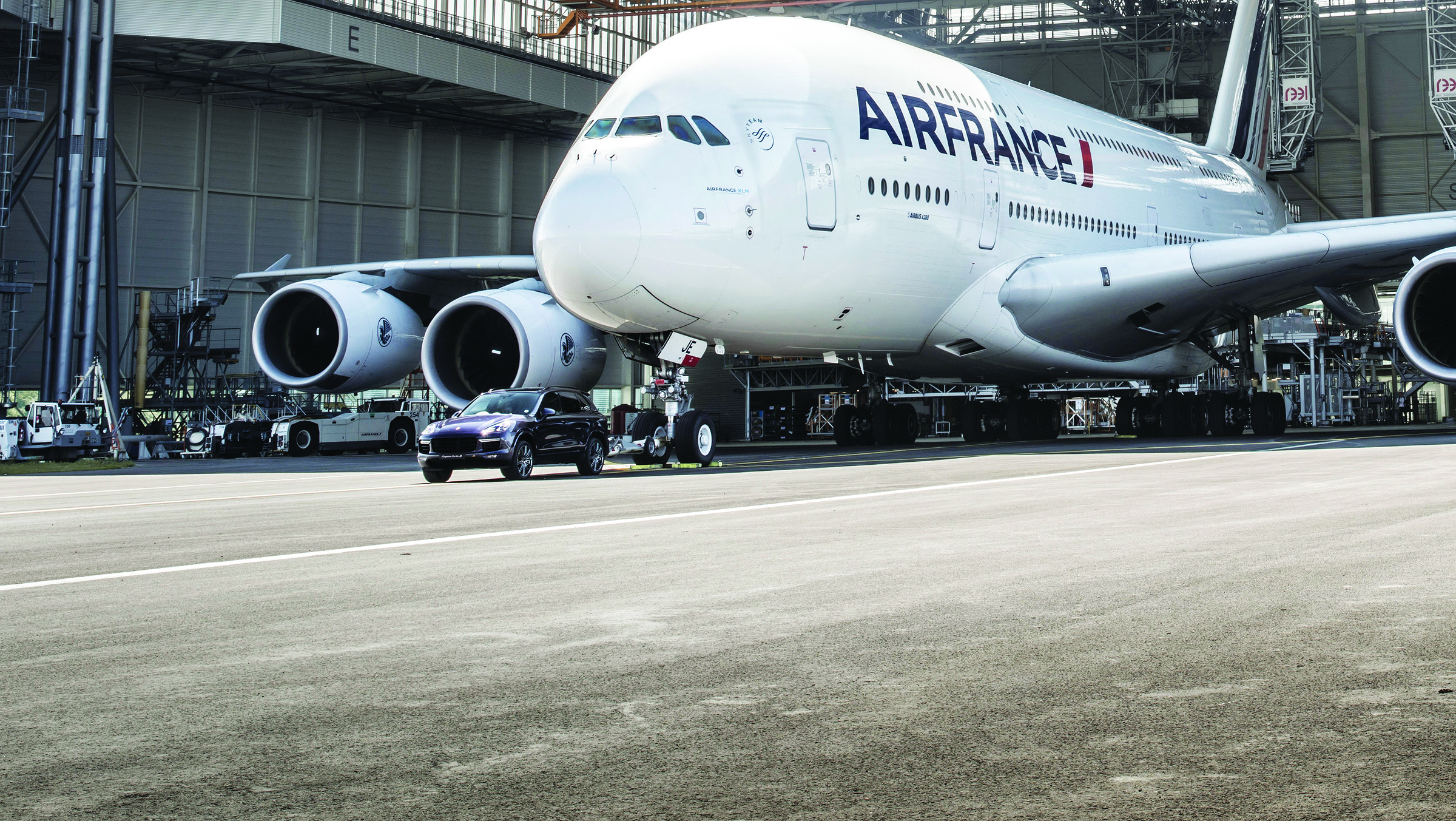 Because of the high demand for the Cayenne, from 2015 on, the final assembly of the model is being done at the Volkswagen factory in Osnabrück, in addition to the Porsche factory in Leipzig. Pre-production (full-body assembly without drivetrain) for both factories is still done by Volkswagen in Bratislava, Slovakia. How can you tell if the final assembly was done at Leipzig or at Osnabrück? Check the 11th character in the VIN – if it is an L, then it is Leipzig, if it is K, then it is Osnabrück (ex-Karmann factory, hence the K).

Porsche rocked the sports car world when the Cayenne sport utility vehicle was introduced in 2002 (with internal model designation 955, type 9PA). North American sales commenced in 2003. It was the first V8 vehicle built by Porsche since the 928 was discontinued in 1995. Both were water cooled and not flat boxer engines. Both engines are direct electronically fuel injected.

2007 saw the introduction of the Cayenne Diesel, introduced at the Geneva Motor Show. The 3.0-L V6 TDI 240 HP/410 lb-ft torque model didn’t make it across the Atlantic.

Cayenne skipped the 2010 model year because Leipzig closed in December 2009 to retool for the second generation. Introduced at the 2010 Geneva Motor Show, the new Cayenne went on sale in April/May of 2010 as a 2011 model. Larger than its predecessors, it grew 72 mm in overall length and gained 40 mm in wheelbase width yet curb weight was reduced to 2,085 kg, making it almost 250 kg lighter than the previous generation. This remake was a big hit for Porsche.

An aerodynamically sloped windshield and more-slanted rear hatch combined with a more-sloping roofline, smaller rear windows, 911-style door mounted external rear view mirrors, and Carrera GT-inspired headlights to give the 958.1 a cool look on the outside. The interior was Panamera-inspired and vastly improved. The generous use of aluminum and magnesium not only reduced weight and improved fuel efficiency, but it propelled the Turbo S model to 100 km/h in 4.8 seconds.

Porsche began developing a Hybrid Cayenne in 2005 and first demonstrated a working unit in 2007. The Cayenne S Hybrid was introduced in 2010 and used a twin turbo 3.0-L V6 VW motor that produced a combined 328 HP from its engine and electric motor. 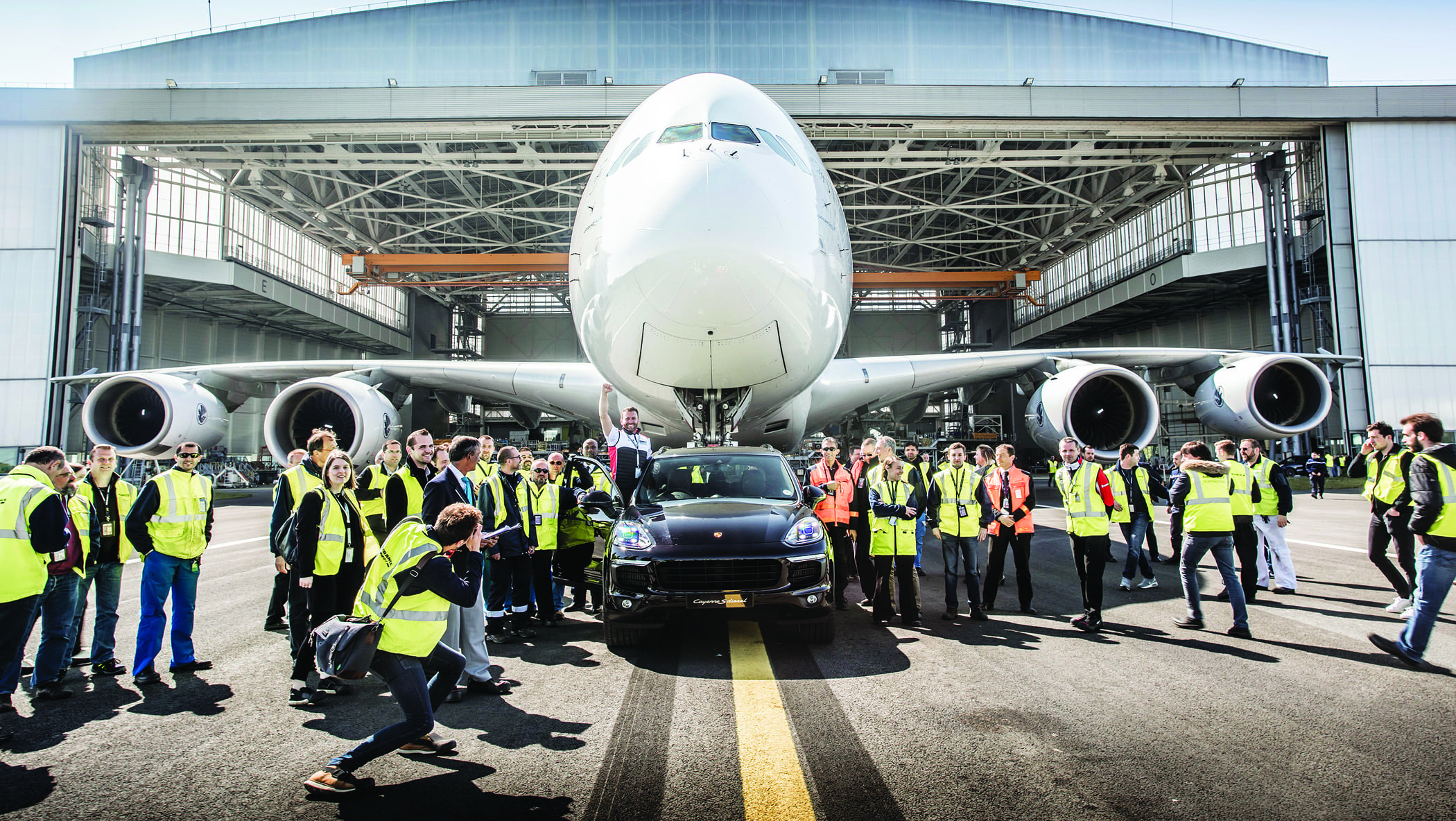 In July 2014, Porsche unveiled the world’s first plug-in hybrid in the premium SUV segment. The Cayenne S E-Hybrid’s combined gasoline + electric output produced 410 HP. Its all-electric range was stated as 18–36 km, under the EU guidelines. The power of the electric motor was more than doubled and top speed in all-electric mode is 125 km/h.

The facelifted Cayenne models launched at the Tartu Motorshow in Estonia in September 2014, and went on sale in North America that November as 2015 models. All of the previous Cayennes had permanent 4WD systems but the 958.2 lost it in favour of improved fuel economy. Power to the front wheels is only engaged when it is sensed that the rears are slipping.

Porsche is currently applying its finishing touches to the newest 9XX designation, the third-generation iteration of the Cayenne, expected to launch soon as a 2018 model. It will use the VW Group’s MLBevo platform, a system also used in various recent and upcoming Audis, Bentley Bentayga, Lamborghini Urus, and VW Phideon and Toureg. Third-gen Cayenne interiors will bear similarity and share components with the newest Panamera family, introduced in the Spring, with high-resolution displays, haptic feedback controls, and the latest connectivity options for safety and infotainment.