We have been with the PCA since April 2012. In May, I volunteered some time and helped Paul Ip, the Event Chair, set-up for the Open House at Markham Fairgrounds. Thoughts of doing a summer Fun Run though, kept looming in my head. 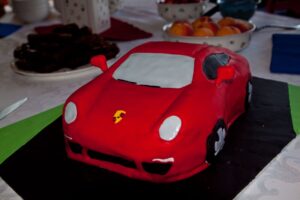 We registered in July for the Collingwood Fun Run and luckily we were number 13 of the allotted 16 cars permitted for the event. Hazel de Burgh, co-host of the event, was your typical perfectionist. Through multiple communications, she made sure every last detail was taken care of to ensure everyone was prepared and ready for a fantastic event. My wife, Lucy, who has never been interested in anything to do with cars, and wasn’t interested in attending, reluctantly agreed to join me with very low expectations.

On August 26, a spectacular Sunday morning, Lucy and I, not knowing any club members, headed for the Tim Hortons meeting place for our first Fun Run. Unsure what to expect, we encountered a parking lot with 16 Porsches and 16 great couples eager to get their cars on the road.

Before beginning though, we were given full instructions as well as a booklet containing a route map and eight pages of immaculately placed full-colour pictures (our clues) and questions relating to the route. At this point, Lucy quickly realized that this was like a scavenger hunt and her full participation was crucial if she wanted to place top three and win a prize at the end of the day. Her competitive spirit immediately came to life.

Final instructions were given, and Hazel emphasized that cohost Don Lewtas and his partner would be leading the group while Hazel and Martin Tekela would be the last car.

We pulled out and regrouped along Creditview Road. From here we started our adventure. Seeing sixteen Porches all lined up one behind the other was an exhilarating feeling and I was thrilled to finally be able to participate in such an event. Lucy immediately started looking for the landmarks and after fifteen to twenty minutes of driving, she actually said “wow I think this is going to be a lot of fun!” I was enjoying the driving and she was enjoying the fact that she had something to do during the Fun Run. 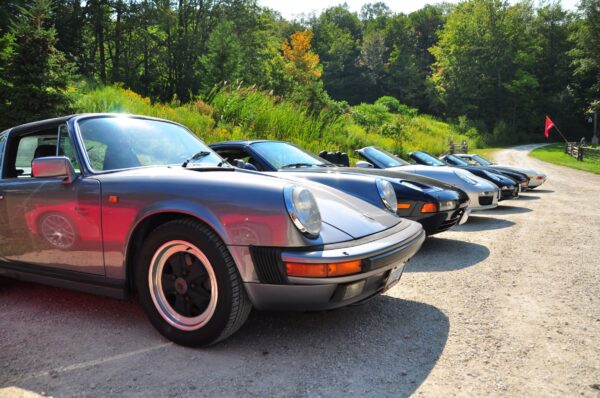 We did not pull out with the lead group so we were one or two cars in front of Hazel and Martin. Following the rest of the pack at a leisurely pace, it was easy to enjoy the beautiful scenery along the route. And then, two cars in front of us, someone had gone the wrong way – we were all lost. Slowly, three or four cars turned around. Photo by Hazel de Burgh Photo by Hazel de Burgh.

The sweep car, with Hazel and Martin, was stopped about 300m back, pointing in the right direction. We easily found our way back on the correct route.

After a few wrong turns I decided to lead this small group – my navigator had to do more work! I’m sure at this point I heard a comment that sounded like, “This is more work than I thought”. With great navigational skills, Lucy was quickly on task and we were following the right route. Within a few minutes we had caught up to the front-running group.

Relaxed and in control, attention turned again to the clues but it was hard to not take in the beautiful scenery. Eventually, we arrived at the first rest stop, the Hockley General Store. Twenty minutes later we were on our way again and headed to our lunch stop, the Terra Nova Public House, a beautiful little 19th century home transformed into a restaurant with wonderful food and a great patio. Hazel had called ahead with the order for the group so lunchtime was spent relaxing and getting to know the other members on the Fun Run. Our table companions for lunch were John and Rosemary Adam.

With lunch finished we regrouped and it was off to our last leg of the run. I decided that I would join the lead group. With approximately one hour of driving time left the confidence of this lead group was evident. Spirited driving during the last leg would eventually get us to our final destination. 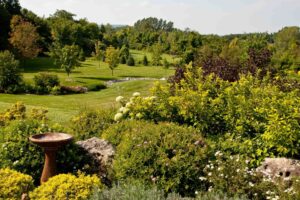 The experience from the previous two legs allowed us to adjust our driving strategy so that we could optimize our information gathering skills and we were excited to find ourselves actually finding the clues on the road. Eventually we reached our ultimate destination and the winding, unpaved, downhill driveway which lead us to the front of Don and Barbara’s log cabin with a view extending to the horizon.

Dessert and drinks were well received by all participants and then tabulation of the scores began. When scores were finally announced, Lucy and I had the highest score and we had, surprisingly, won! What a great way to end an absolutely fantastic day in the company of people with similar interests – including the love of those iconic cars.

First time UCR PCA members should get involved in club events and be as pleasantly surprised as we were.

Thank you Hazel and Don for a wonderful summer Fun Run. A big thank-you is in order for all of the volunteers and especially the event chairs who go above and beyond to make each and every event as enjoyable as possible.