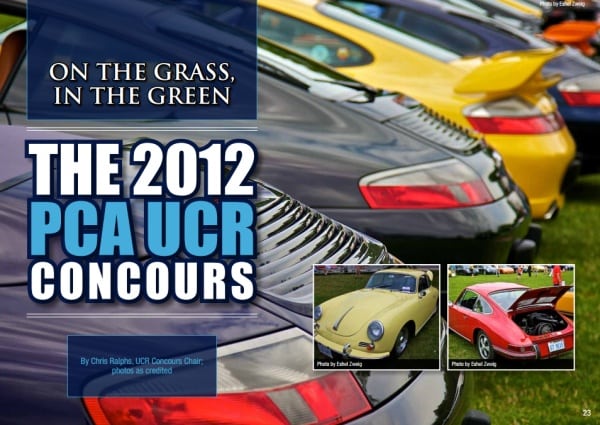 The annual “PCA UCR Concours d’Elegance” is perhaps a Concours in name only. Strictly speaking, it is not an event for the purist, as it is peer judged and is organized and run by volunteers as an opportunity for Porsche enthusiasts to display their beloved rides, marvel at others and experience the camaraderie our club is so well known for.

Due to some bad experiences with other car club events several years ago, Appleby College took a break from acting as host for these events altogether. I thought enough time had passed and that it would be worth approaching them to see if they would give us a chance to prove that we could put on a well-run event without ruining the grounds. My efforts paid off, although I should mention that I did get a little extra push from a close friend and Appleby faculty member. The deal was made and the event was on.

As in the past two years, our biggest challenge was the weather. It has not been kind to us recently. We have had to deal with cloud cover, high winds and rain showers. This year, the Concours team had to make a very last minute decision to postpone the event to the rain date of June 24th. The weather forecast kept changing for better and worse every few hours. This decision was not taken lightly as we had to consider that members would have already spent considerable time preparing their cars. The feedback on our decision was generally positive and the rain date delivered a very nice day despite a few clouds. The Concours team members and volunteers all arrived early to set up but, of course, is was a bit of a scramble to have everything ready for the arrival of the participants; that’s to be expected. With every event there are learning opportunities and next year we will make it an even bigger and better UCR Concours. The event started on time, and thanks to the participants, we had what I believe to be a record turnout of over 70 registered cars! That does not take into consideration the additional same number of cars that were in the parking lot. Hopefully these ‘shy’ ones will decide to enter next year as well. While everyone enjoyed the wonderful display, Appleby’s catering staff was offering delicious coffee and pastries and later, a German-style lunch.

With virtually all car classes well represented, it was encouraging to see many entries in the early classes. As time passes, the 356’s and the early 911’s are becoming a big draw for our members. Every car on display was appreciated as evidenced by the broad distribution of peer votes. Some decisions were very close and this would have been the case even if accredited judges were doing the evaluations.

Not to slight anyone, since every one of our cars is special, but of particular note were the numbers of early cars, the 356s and 911s; the latter having to be parked three rows deep due to the unexpected large number participating. Gerd Schwartzkopf turned up in a yellow 356 Speedster that was not quite finished but still very pretty to look at, but another 356 took the People’s Choice award, the 1960 B Roadster of Stephen Lax. 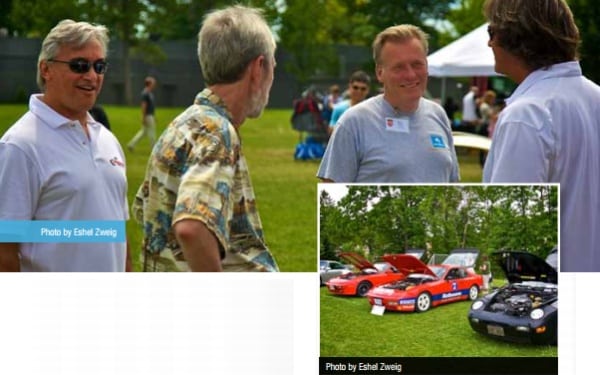 The UCR Concours Team wishes to thank Appleby College for their tremendous help and cooperation in putting on this event. We certainly hope to be invited back there next year. I also want to thank the team of Richard Shepard, Event Co-Chair, and Otto Mittelstaedt and Kye Wankum, as co-organizers. Thanks are also due our volunteers: David and Anne Forbes, Jeremy Ralphs, Amanda John, Douglas Ailles, and Ashima Jain who volunteered to help make the event a success.

Our sponsors are the ones who bring it all together for us and allow us to make a donation to the Canadian Red Cross after the event. They are Pfaff Autoworks, Porsche Cars Canada, Auguste Automobile, Braidan Tire, The Plan by Investors Group/Douglas Ailles, Harmony Printing, Lant Haverty Silver Wheel Plan, OnWall Solutions, and RS Appraisers – Thank you!

To join the UCR Concours Team for next year, please contact Kye Wankum We are always in need of more help and especially suggestions on how to make the PCA-UCR Concours d’Elegance an even better club event. 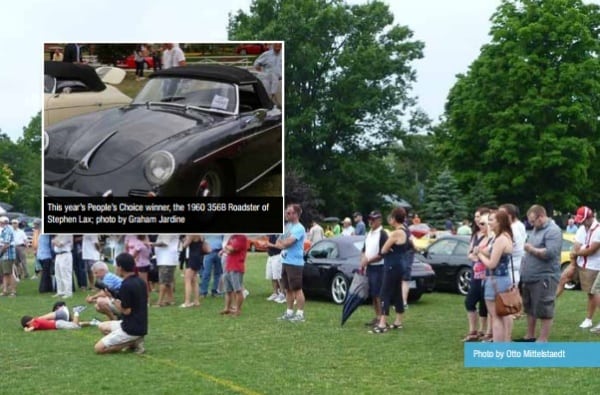