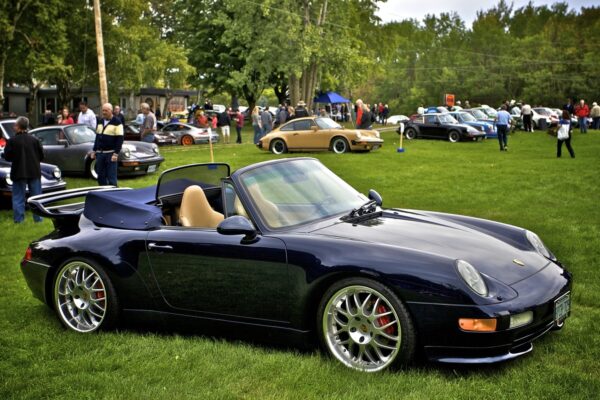 Registration went smoothly, with only a short wait as participants were processed. Those who pre-registered online, which was a first for the Concours event this year, were through in about thirty seconds.

Rob Moser of Moser’s Patio and Grill rolled up his sleeves and made coffee and cooked breakfast for the early birds. Outside, the grounds offered a perfect country setting for all the beautifully prepared cars entered in the event. The early cars were arranged in a semi-circle on a small meadow with a leafy backdrop, while a combination of later models offered a contrast to the new vehicles featured by PCO on the main field. Fortunately, access was easy even for those with low spoilers and splitters. A Cayenne, a 928 and a lone 914 rounded things out in a grassy hollow which led back to the 356s.

The morning went smoothly. Lunch proved to be a bit of a challenge as everyone descended on the Restaurant at the same time. Fortunately, Moser’s was pouring pints, which made the wait for food quite bearable.

This year’s event offered up a few delightful surprises. One was the fact that it didn’t rain even one drop. Also, the special interest group included an expertly crafted replica of a 917, albeit without an engine at the moment. Its creator is a local adventurer, helicopter pilot, fabricator, Hamilton fireman and owner of CRC Racing by the name of Toby Follows; he would be happy to make one for you, fitted with the motor of your choice! The most notable surprise was that the People’s Choice trophy was won not by a shiny and perfect 356 but rather a well-prepared black 1985 911 Carrera entered by Allan Becker. Congratulations, Allan.

Along with the usual cadre of beautiful 356s, there was a large number of early 911s entered this year. They were all very interesting examples, and the range of rich colours reminded me that at one time cars were not all silver, black or white! Also, the Hunziker artwork and apparel on display was the perfect accent to the 356 and early 911 displays.

In response to comments received following past events, this year we introduced something new. An optional “judged” category was added. The idea was to offer members the chance to have their cars evaluated by experts based on the PCA Parade Concours criteria. Bruce Farrow of Road Show Appraisals, along with Botho von Bose, Danny Kroll and John and Rosemary Adam all volunteered their time to carefully judge each and every entry in this category.  There was so much interest that the judging group was hard pressed to finish all the evaluations and be ready to announce the results. As it worked out, they were able to complete everything and arrive at the presentation area just as the last of the other trophies had been presented. First place went to Jerry Reckless with his black 1959 356 Carrera Four Cam Coupe, second to Marvin Ungerman with his green 1964 356 Cabriolet, and third to Rudy Vanderuecht with his blue 1970 911.   Congratulations to the winners and thanks to all who entered this new category. I am sure everyone who entered learned what is important in preparing a car for an expertly judged Concours.

The UCR Concours would only be possible with the support of all the participants and, of course, our sponsors and volunteers. A special thanks goes out to Doug Ailles, a long-time supporter and sponsor of the Concours event, for his assistance with the registration.

Lastly, we received quite a few written comments included in the People’s Choice ballot sheets, which are greatly appreciated, as they help us to plan better events every season.

On behalf of the Concours Committee, including Kye Wankum, Richard Shepard and me, we extend a hearty thanks to all and look forward to seeing everyone again next year.