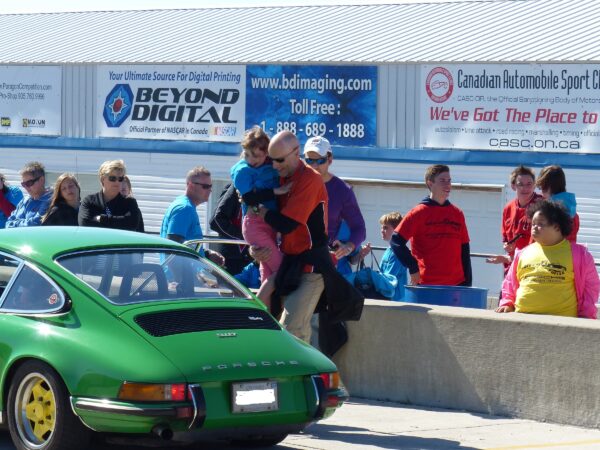 UCR’s Family Fun Day, driven2smile, is held the first Friday of June at Canadian Tire Motorsport Park (CTMP). UCR club members volunteer as drivers, hot pit helpers, operations support and with off-track activities. People, of all ages, with unique medical, physical, developmental, sensory and social-emotional considerations, are given the opportunity of a lifetime—to ride in a Porsche around the world-famous track at CTMP.

Everyone who helped us get in and out of the cars was laughing and joking with us. The racing harnesses were tricky to get into, so I really needed their help with those. They were also great with the little kids—lifting them high above their heads and over the wall. An airplane ride and a ride in a Porsche–who could ask for more? Some of the riders were also in wheelchairs. The helpers were really kind and polite. Everyone was so respectful of each other. Some of the moms and dads were nervous about going for a ride. That was too funny! Most eventually went and had a blast.

As I got into each of the Porsches the drivers would introduce themselves and get to know me. They were really friendly. They asked how I like to go around the track. I always said I liked to go fast!!! I learned about wet and dry lines, how to take corners, and how give passing signals. I’ve grown since last year, so I had a much better view out of the front and side windows this year.

When I rode in the Porsches and BMWs at UCR’s driven2smile, I was exhilarated by the speed on the straightaways. Some of the corners were slightly scary in the way the drivers took them. I had to really hang on tight. They were so fast; it looked like we were going to go off the track or into the trees. Going up and down the hills was trippy— it gave me the heeby geebies, but I didn’t get as car sick this year, though—phew!

The corner workers and Robin, the tow truck lady, were amazing. Robin even took the tow truck out on the track so families could ride together. She had ten people in her truck for one of the rides. 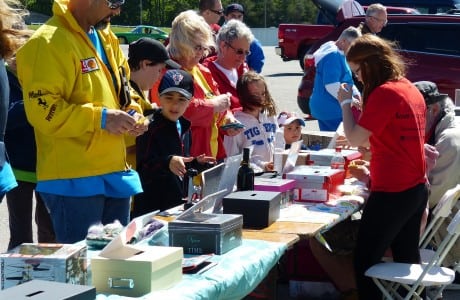 When we weren’t on the track, I hung out at the big tent next to the snack bar. There were raffle prizes this year, so I helped sell tickets. The moms and dads wanted to win the bottle of wine and the winery tour, but the kids wanted the skateboard, guitar, RC helicopter or RC cars. People were really excited and having fun.

Inside the tent, we could do lots of things. There were toys for the little kids. Arts and crafts for everyone, and board games for the teens. Beside the tent you could play road hockey or take shots on goal.

Janet and her crew made macaroni and cheese with hot dogs for lunch. Then we were allowed to make our own ice cream sundaes. YUM!!! When everyone came for lunch I was amazed to see just how many people there were. Mom said there were 425 guests, plus 80 UCR member volunteers, 30 other volunteers, and then the corner workers, tow truck crew and the ambulance crew. WOW! We’d never be able to have this many people anywhere else!

After lunch we tried to take the group photo, but quite a few people had already left because they came from far away. One family came from Waterloo. Their son has Autism and loves cars. He was in heaven at UCR’s driven2smile. Another family came from a little town east of Ottawa to join their grandkids for the day. Their youngest grandson, who is five, has cochlear implants and still learning to speak. He loved going fast, and the tow truck! 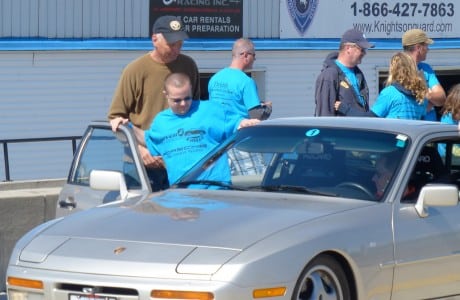 Behind the scenes a lot has to happen before and after driven2smile. Each year we try to raise donations to help with the cost of the activities under the tent. This is my second year going around with my mom to different stores and talking to them about driven2smile. This year The Daniels Corp (thanks to UCR’s own Jim Aird) made a very generous donation again. Long and McQuade donated an Epiphone acoustic guitar; Extreme RC donated an RC helicopter; Scholar’s Choice donated Spy Gear; MasterMind donated and RC car set; West 49 donated a skateboard; our friend Tina knit a shawl and my grandfather, Doug Clements, donated an RC helicopter and kites. All of these things were put out as raffle prizes. Selling the tickets was a lot of fun. I got to meet a lot of new people who came to enjoy riding in the Porsches.

After driven2smile, we gave thank you plaques to each of the UCR members who helped us, as well as to each of the people who donated for the raffle prizes. It was amazing to see the look on their faces and how they reacted when we showed them the plaques. Coming to driven2smile is free for everyone, if they donate a food item for the food bank. The best feeling I ever had was when we took all of the food donated to Simcoe Hall Settlement House. The back of my mom’s Santa Fe was packed. They were so surprised, the older lady who sorts out all of the food was almost in tears. We promised to see them again next year and bring even more food for their food bank.

I hope next year will be as good as this year, or even better. I hope to meet even more people from UCR and more amazing kids. For everyone who is reading this, I would like to make a huge shout out for all of those who volunteered to make driven2smile possible. THANK YOU. 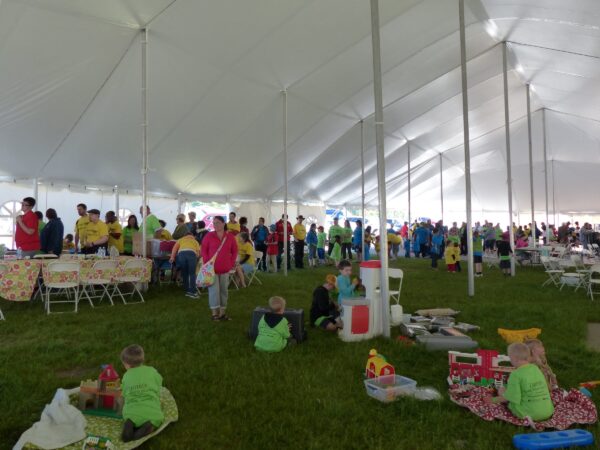 Hi, I’m Thom. I am 14 years old. I have dyslexia, anxiety, depression, two vascular anomalies in my brain and severe ADHD. That may be a lot of stuff to handle, but I am still an outgoing, kindhearted kid who loves animals. I have a lot of pets; they help me get through my day.

I first met people from UCR at Mosport when my mom brought me to one of her track events. I met a lot of nice people. I instantly fell in love with them and their cars. They were very understanding of me and what I am dealing with. They have made my day multiple times by taking me and others, with situations like mine, around the track in their cars. I like to help out with the rides for kids with cancer on Saturdays at lunchtime. I think we should call it Hearth Place Heroes because the kids are so courageous and the track team members are so compassionate. It is an awesome experience just to feel like you’re one of the track team when you are up there pitching in and helping.

People have also taken the time to sit and chat with me. They have told me about themselves and I have shared some of my stories. They have made life-long memories in my heart for simple things such as saying hello and taking time out of their schedules to chat, show me their car, and tell me about how things work. It’s so much fun getting to meet people at the track and helping them when needed. This is why I think UCR is great!