The Circuit of the Americas (COTA) is a fantastic track with 20 corners, more than 5 kilometres long, and a regular on the F1 schedule. It’s deep in heart of Texas, with Stars and Stripes painted over sections of the track, and it was on our track bucket list.

I track with a group of friends from the Toronto area. We met about four years ago and became quick track buddies. We share a love of cars, driving fast and having fun. Fun is a big part.

We have fast drivers, and faster drivers, but the big measure of our hobby is can we have a laugh or two. In a way, it’s no different from being fishing buddies; we go out and do a few sessions on the track and then tell our “fishing” stories about our best lap, apex, pass, braking zone etc.

The plans started about a year ago. One of our group said “we have to go to COTA, they run F1 there, and they hardly ever run DE days”.

Chin Motorsports announced a COTA weekend for mid November 2014. In January 2014, we all logged in with hundreds of other enthusiasts as soon as the registration opened and furiously added in our information and paid our money. We were officially on the list.

Organizing five people and cars from Toronto to COTA is no small feat. We needed flights, hotel and transport for our track cars. The first two were pretty easy, and the third proved to be very pricey.

Eshel Zweig and I decided that we should rent a car at the track and that’s where the Cayman S came in. A good friend keeps a Cayman at a track in the Southern US and offered us a solid rental deal. It was a 2014 Cayman S with PDK. It would show up with fresh R-compound tires and Pagid yellow brake pads, ready to go. It was bright, bright yellow, kind of like staring into the sun.

The flights were simple, Toronto-Dallas, Dallas- Austin. You can see the track from the airport in Austin. When we left Toronto it was 0 Celsius. When we got to Dallas it was 0 Celsius. Let me repeat that, 0 degrees. Some sort of strange Arctic weather pattern landed on our COTA weekend; so much for the goal returning to Toronto with a tan. 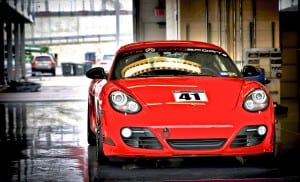 Arriving at the track on Friday night was worth the wait. Everything seemed new, big and very professional. A massive tower overlooks the track and looks very much like Frank Gehry might have designed it. Chin is very efficient and we were quickly signed in and assigned our paddock. The garages were still labeled with the names of the F1 drivers who used them two weeks prior, very cool. The weather looked ominous, however.

The 7am drivers’ meeting came quickly the next morning. There were two hundred eager participants, and after the requisite review of rules and procedures we were off. Chin ran four groups and the drivers ranged from fairly new to top NASA race drivers.

Cars ranged from street cars all the way to Ferrari and Porsche race cars. It was a feast for the eyes and ears, especially given the long front straight past the paddocks.

The temperature—cold—ranging from six to eight degrees, was all we saw all weekend. And the rain came and pretty much stayed the whole weekend. It ranged from light showers to downpours. Grip went from pretty good to non-existent.

To say that I approach PDK with a sense of trepidation is an understatement. I have never owned anything that was not manual. My last two cars were GT3s, and I have been driving a Z06 Vette, but that’s already sold; I’m coming back to the Porsche world.

I was convinced that PDK was for those that could not work a six-speed manual on the track. Being a fan of the GT3, I have been involved in almost religious debates on the merits vs. the blasphemy of the PDK-S in the 991 GT3. I simply couldn’t wrap my head around the loss of the third pedal; in a way it seemed too much of a leap from the experience a 996 GT3 could generate—the cars had become too digital.

Given the weather and temperatures we were passing cars that probably don’t often get passed by Caymans. PDK: I liked it, and I get it for the car. Lightning fast shifts. At the end of straights dropping three gears was no problem. First gear in slow hairpins? Sure thing! 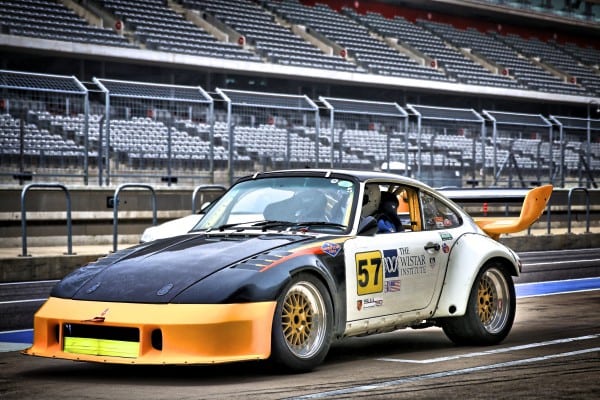 COTA has a bit of everything, high-speed straights, fast sweepers, slow corners, hard braking zones, blind apexes and this was the perfect car for us, new to track and dealing with interesting weather. My biggest negative on the car is power, it needs more, and this is appears to be a Porsche marketing decision more than a question of what the chassis is capable of handling. It will be interesting to see what the Cayman GTS amounts to. 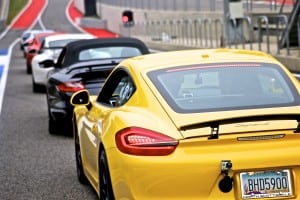 Next time we go to COTA I would love to get that tan!