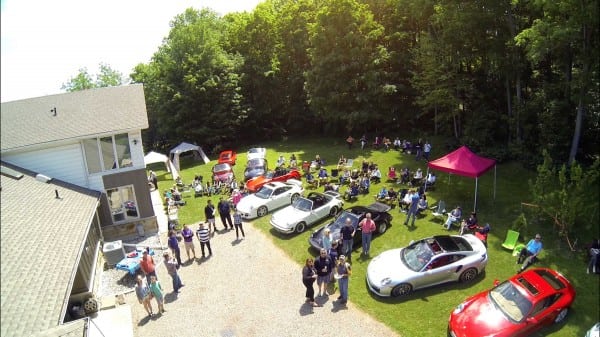 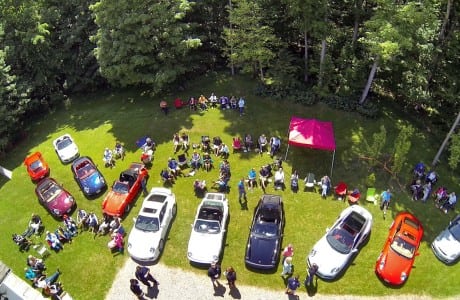 Pulled into the parking lot and as usual, even though I was early, lots of Porsches were on site. Jennifer and I needed to be early as we had 45+ cars scheduled into three groups for the run. This year’s midway point was a winery and getting 90 people there at the same time was not going to work out well. We divided into groups, leaving in 15-minute intervals, to help with the FlatRock Cellars visit.

The Fun part of the Run is primarily through the Niagara Escarpment by the wineries, farms and homesteads “up top”. Most don’t see our area in their drive down the QEW to visit Niagara-on-the-Lake. We design the run to show another great side of Niagara along with a palate-pleasing tasting at a local winery.

The Poker part is a random picking of six cards along the way and you make your best five-card poker hand to win some prizes. Group one arrived back with 15 cars and we spread them out across the backyard for some great “eye candy” for all to enjoy during the catered lunch. 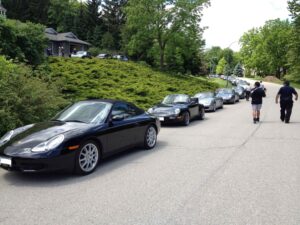 There is a great video from this year’s event from the viewpoint of a mini-helicopter, courtesy of member Richard Zuccato. Check it out here: http://youtu.be/wyM-Ap_Rl8o.

Repeat attendees John and Wendy House wrote a note about their day (see below).

Come join us next year on the Saturday before Father’s Day for our 5th Annual Bear Manor Poker Fun Run.

Shortly after I acquired my Porsche three years ago I decided to become part of the Porsche community. When I started receiving all of the literature I realized that there were many social events to attend and people to meet. 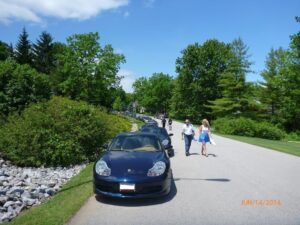 We decided to attend the Bear Manor Poker Fun Run in 2013 since we live in the Niagara Region and this gave us a chance to see what the events are all about. We had such a wonderful time that we decided to attend again in 2014. This year’s event was increased to 45 cars from 40 the year before. Vaughn and Jennifer have done a fantastic job arranging the drive through the winding roads of the Niagara Region, the wine tour and tasting, and finishing off the day with a catered luncheon and a chance to talk to fellow members about their Porsche experiences and knowledge. It was also an honour to be in group one and showcasing our Porsche in Vaughn’s backyard during the lunch.

Did I mention our Poker hand? Sorry, it was nothing to talk about…

Thanks again to Vaughn and Jennifer, (and the weatherman), for making this day a great time. Already looking forward to next year’s event.