Flew to Stuttgart recently to take European delivery of a new Macan S. They are built in Leipzig but trying to find a delivery slot there is pretty hopeless. This Macan belongs to my wife but she has allowed me to drive it-—even if the two keys that come with it are known as ‘her key’ and ‘her spare key’.

There are a lot of us fascinated by the Macan; the spec reads rather well and the motoring press give it a big thumbs up, but what will a real Porschephile think? With a 991S cab and a Cayenne at home already I thought our little tour of the Alps would be a good way to benchmark the new car, especially as I ran a pair of 991s over very similar routes recently.

Porsche have clearly put a lot of thought into the Macan, a model that shares its floorpan with the Audi Q5. My wife’s Macan is the twin turbo ‘S’ model which is currently the only alternative to the turbo being imported to North America. She opted for this 340hp, 339lb/ft torque model chiefly for its likely better residual over the turbo and the much more winter fitment friendly 18” wheels. The turbo uses a 3.6 litre engine and makes 400hp, in real life, out on the road there will probably not be much to split the two. 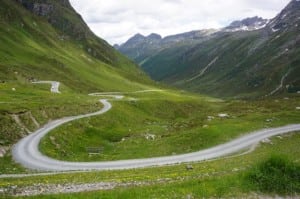 The comfortable interior is fine for four adults. Rear seat legroom has been improved significantly since the previous generation Audi Q5. Luggage room is fine as long as you have nothing that is tall as well as long—the steeply sloping rear hatch will probably not like that. That headroom limitation may also be of concern for dog owners such as us. While there is plenty of floor area behind the seats a dog the size of a Labrador will probably find his nose on the glass when sitting up.

Talking of the hatch, one improvement over the Cayenne is that it may now be closed as well as opened from the front seat. The interior trim is at least as well executed as it is on the rest of the Porsche model range—which puts it right at the top of the tree. The layout will be familiar to anyone used to the new Porsche centre console architecture. I’m still unsure about all those buttons on the transmission tunnel console—you have to look down to see them and locate the one you want—but the design looks good, especially at night with the trick overhead illumination.

On start up from cold the exhaust note sounds at least as good as our 991, aggressive enough to be noticed but not the sort of volume that will wake the neighbours. It does however make it quite clear this baby means business.

The little V6 3.0 litre mill whirs away with no discernible harshness or vibration. Remarkably it seems to become smoother the faster it spins. It is a very relaxed highway cruiser and at 100 mph it is idling along at just 2,500rpm. 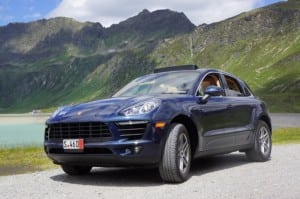 At the paltry velocities we can attain in Ontario and keep our licenses intact you will be at less than 2000 rpm.

That power plant is hidden beneath a marvel of engineering. The bonnet is a one-piece clamshell fabricated in aluminum. Open it and the whole front rises, leaving the headlights behind. Very neat, no shut or joint lines at all, so very elegant. It does extend right to the front top leading edge of the car and that makes me think it will inevitably be damaged in a relatively minor frontal accident. It will not be a cheap piece to replace.

Leaving Stuttgart we proceeded south toward Innsbruck in delightful weather. Traffic was reasonably heavy at first but once clear of the city environs the autobahn opened up for a while. My travelling companion was soon asleep, and she can confirm the Macan is a very good car in which to snooze. It is an astonishingly competent highway cruiser—I had feared that this might be the one area where it could easily fall short of the Cayenne. But no, it is very quiet and the front seats as comfortable as the best I’ve ever tried, so the zzzz factor for a passenger is certainly always on tap.

There is a pecking order on the Autobahns and very strict lane discipline. We just tooled along with the humdrum most of the day but did join the big Audis and Mercs on a couple of occasions. I think they were as surprised as I that a little SUV was quite happy skipping along at speeds that in Ontario would probably have you in jail. Not just happy, but reveling in the experience.

The steering wheel, borrowed from the Porsche 918 Hybrid supercar, is comfortable, beautifully wrapped in leather and has all the controls one would expect ready to hand. Don’t expect it to give you the feel of a 991 or Cayman, it cannot quite reach that level of precision and connectedness, but it will match just about anything else out there and is otherworldly for an SUV. I inadvertently kept waking my sleeping companion by whooping exclamations such as “it cannot be this good” or “this is ridiculous, I’m driving a 4,200 lb SUV”. On the highway it is untroubled by side winds or sweeping bends or much anything else. Calm, comfortable, capable. At above 100 mph there is some inevitable wind noise but it never becomes too intrusive. We tested that statement at up to 146 mph.

The performance for an SUV is electric. Stomp the right pedal and the PDK will drop a gear or three and it just gets up and goes. Yes there is some turbo lag, especially if the engine is not already spinning quickly, but it is minimal and the surge of torque is the best I’ve known this side of a turbo diesel. One of the little gizmos on our model is a schematic that shows the dynamic real time torque split front to rear – mash the throttle and it hits 50:50, cruise and it is around 20F, 80R. Looked at it once, played with it, will probably never look at it again.

After lunch at Schlossanger Alp we headed over Hahntennjoch Pass to Imst and Telfs. The Macan acquitted itself with surprising ability on the pass. The turbocharged power falls off not at all at altitude and it can rocket up the straighter bits. I turned on Sport mode and the downshifts were just as you would expect from a PDK, superb and fast. The brakes are 350mm vented six pot fronts—the same sort of spec as the Cup Car brakes on my track Cayman—they haul the speed down very well time after time with no fade. Another day we took on the northern descent of the Silvrettastrasse Pass, which is a 33-hairpin monster with brand new tarmac. The brakes took a beating but never gave any indication they might be under pressure.

Handling is good. In deference to the fact that it is my wife’s brand new car, she was riding shotgun, and we had four suitcases in back I was doing nothing remotely heroic. But you can tell you are hustling 4,200 lb. Not in the way you would in any other SUV, but inertia is inertia and there is not much you can do about it. And, of course, I was comparing it to the 991S I had hustled over that same road with a lot of brio months before. Silvrettastrasse was taken without luggage and this certainly helped in the handling department, but again I was not going to push a brand new car to anywhere near the limit. We made rapid, comfortable and very competent progress.

For those of us living in Ontario the choice of winter rubber may be interesting. As I have already noted, we opted for the 18” rims in the belief that winter tire choice would be much easier. But now I’m not so sure because the front all seasons are a different width and profile to the rears. I’m guessing the rolling radius is equal but nobody at the factory delivery unit could confirm that or suggest a winter fitment. 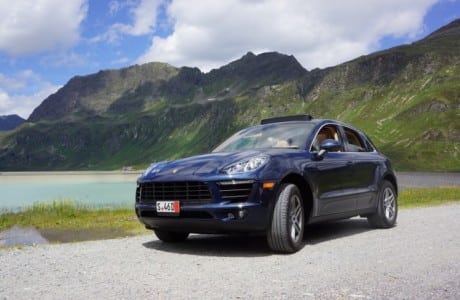 I don’t think towing will be the Macan’s forte. It has a rating of around 4,500 pounds—more than my minivan, but a good 3,200 pounds short of the Cayenne. I’m only guessing, but my bet would be that it is the PDK that is the determining factor as the engine has plenty of torque. But then you don’t tow with your 911 do you?

The Macan is not a 911 but it is closer to a 991 than it is a Cayenne. I would say Porsche have nailed this completely, finally a car company has put the ‘sport’ in Utility Vehicle without any real compromise. It is a joy to drive and would probably scare a lot of other cars if taken to the track where it could be set up for a corner and not have the constant jinks of the high alpine passes. And of course you would leave the suitcases behind!