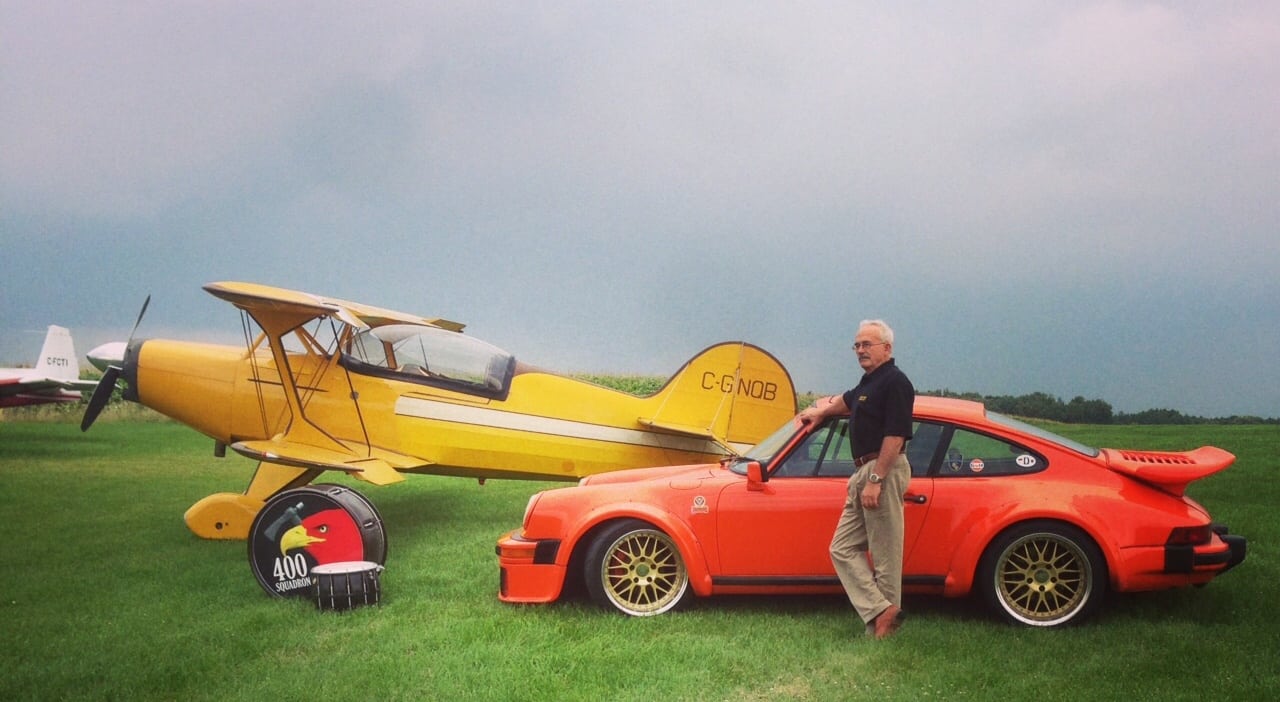 Before I finish the story of my tribute build, I want to give you, my faithful readers of Part I & II in the preceding issues of Provinz, some reasoning behind my insane choice, and some history in regards to the venerable 934.

Learning to drive any turbo-charged car back in the day was a technique unto itself and the 934 was no excep­tion. Quite the contrary actually; only a handful of drivers really figured out how to point and squirt the “thing”. These guys knew how to use the horsepower and the rear wheels to their advantage. The 930 platform was used as the backbone for the 934, it was highly modified over the production chassis with aggressive looking bolt on fend­ers, central locking wheel hubs and brakes similar to that seen on the 917s but, the 934 had a secret, a “Dark Secret”. Most drivers that thought highly of their own skills soon found out how inefficient their abilities were. Unlike a typical race car, the 934 seriously lacked power down low. It was a huge issue but because of the extremely low cylinder pressures, it allowed the Factory to run much higher boost levels, gaining huge amounts of horsepower with adjustability for the driver inside the cockpit. 1 – 1.6 atmospheres was its range, but to make it work, the driver had to push the engine past 4500rpm before any pressure would have any effect on relative speed, then at approxi­mately 5,500rpm the “Sum Of All Fears” would kick in with such force that most drivers couldn’t make it work. We have to remember these cars ran a non-differential, a solid-spool as well as a transmission that had very tall gearing. All teams had a good selection of gear ratios from the race department; Porsche spent the time to architect all the gear charts and these charts contained all the information for teams to determine the best way to run their cars. To be competitive in the Championship, teams needed to change the ratios at all tracks, if you didn’t you would simply be left behind. The engine RPM window on boost was only about 1800rpm and keeping the engine on boost proved for some, insurmountable. The 934 worked well at LeMans with its long straights and vast sweeping corners, but at tracks like “The Green Hell” it proved a real challenge. Gear ratios, lower wing angles, turbochargers and modified waste gates were all tried, on top of that the engine had its own issues as well and was seriously limited due to the inefficiencies of the K-jectronic mechanical fuel injection system. Most teams would eventually drop the 934 engine and install the latest 935 power-plant, turning the car into a “934.5”, but by changing the engine the teams would automatically be bumped up to the more competitive class of Group-5. Thus the 934, still to this day makes most drivers take a few steps back out of fearful respect, and it was this car that helped coin the phrase “Turbo-Lag”. 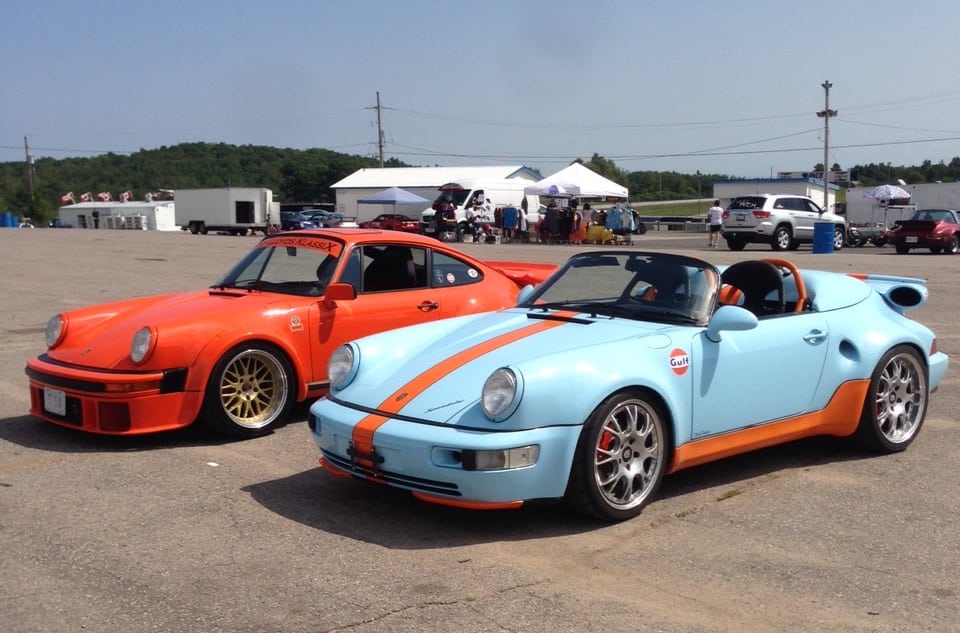 For me, I wanted a turbo engine that has great normal aspiration advantages combined with the animalistic brutality of the 934. I remember my days at Hamilton’s Porsche in Melbourne, Australia where I got to work on Alan Hamilton’s red 934. It was the very first 934 that I was lucky enough to drive, and it was this Porsche that former F1 champion Alan Jones drove to an overall Aus­tralian Championship. 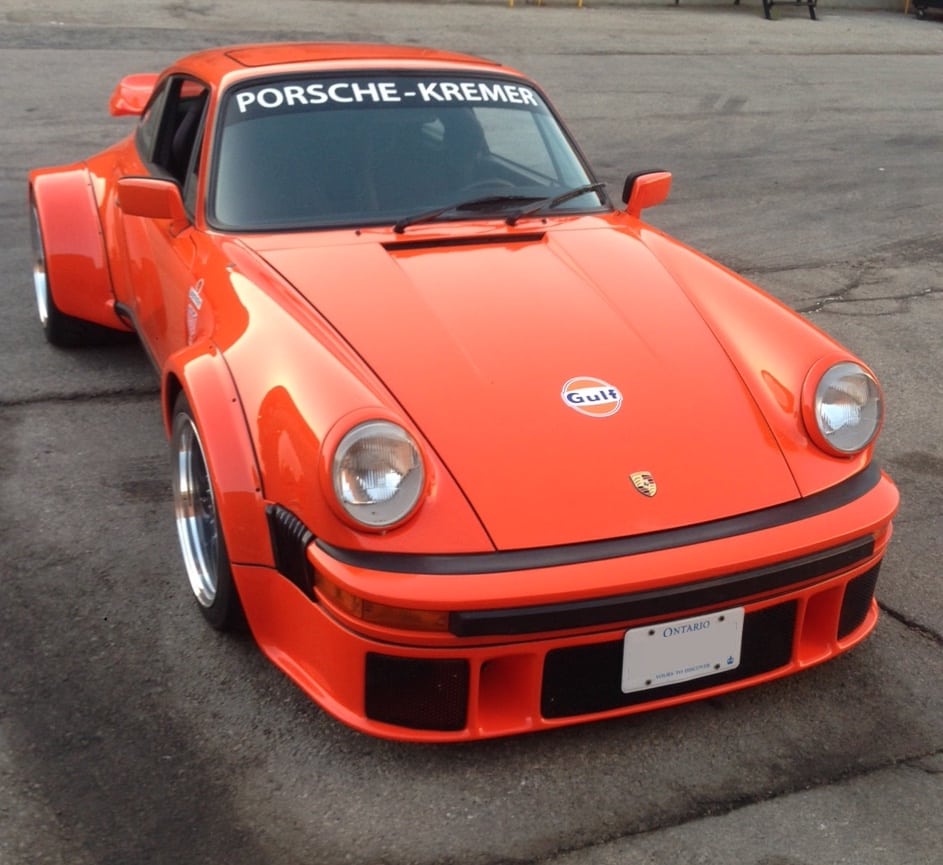 Back to Making Fat. Whilst the chassis and related parts were with my paint guy, I concentrated on assembling the engine. I initiated the process with a 964 engine – it is a great platform to work with, it has a long stroke crankshaft with larger spigots that allows you to move up to 3.8 litres if you so wish. The only real problem with them was Porsche went to porcelain inserts inside the exhaust port of the cylinder heads; this helped to move the exhaust gases out more quickly while assisting with heat transfer away from the heads, but at a cost. Portions of the porcelain can break away allowing chips to go all the way through to the catalytic converter. On a normally aspirated motor this is not a huge problem but on a tur­bocharged motor it is catastrophic. I planned for a reliable yet powerful motor and I wasn’t willing to take too many chances. The most power I have ever crunched out of a 911 turbo engine was a 3.5 litre with a staggering 710hp at the wheels as verified by the run sheets from a rolling road dynamometer. That calculates to a whopping 820hp at the flywheel by way of load losses, gears, differential, wheels and tires etc., using a rough 15% calculated loss. The pay-off to consider is that a turbocharger is 100% efficient, in other words the engine doesn’t use its own power to power it unlike the “pain in the ass” belt driven supercharger. 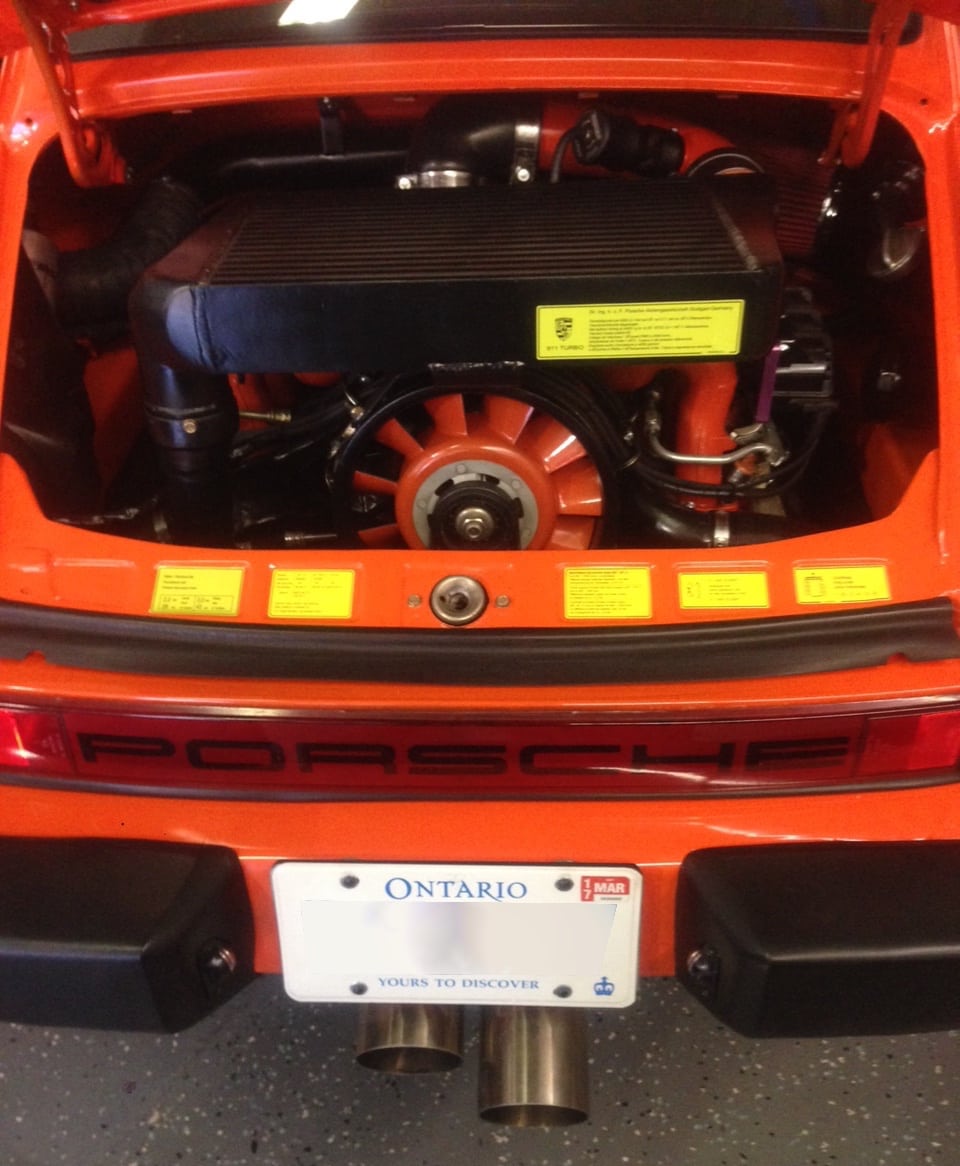 Getting the interior into the black I wanted took a lot of time. I arranged with a friend across the border to supply me a custom set of lightweight race carpet almost like felt but without the temperament of the felts. Wanting to follow the 934-935 theme I installed a look-a-like shifter with a provision for the all-important boost control­ler, but locating an original boost controller was proving to be an impossible task, or so I thought. I was up at Mosport for our PCA race weekend a few years ago and a fel­low Porsche “dude” from Montreal struck up a conversation with me. We talked about his turbo race car and I told him what I was trying to achieve with mine. You would not believe it, this guy, “my new friend”, had an original 935 boost controller that supposedly raced at LeMans. I couldn’t help myself, a deal was struck; I was willing to do whatever he wished to procure the controller. In exchange, I fabricated a high-flow aluminum twin-turbo intercooler for his car, seeing him the following year for the same PCA event we both expressed our pleasure in the deal we made and we have since become great friends. Once I had the piece, it was immediately installed into the provision I had made. I also installed a softer spring into the waste-gate which allows me complete control over the engine, with the lowest set at .3bar and adjustability all the way through to 1.35bar. Turning the wheel to the left or right lowers or raises the boost levels accordingly, but you have to be extremely disciplined or your Porsche World will come crashing down, one mistake and detonation becomes your worst nightmare.

As we all know any early 911 or 930 can be a handful to drive, by having the low boost through a controller permits a much safer drive particularly during inclement weather. On a side note, if your aspiration is to become a better Porsche driver and you are willing to listen and learn, then in my opinion, the best way to improve your driving skills is to participate in the PCA-UCR intro­ductory driving-school along with the accompanying skid-pad provided up at Mosport. The skid pad is a lot of fun and is kept constantly wet in order for you to quickly figure out why the rear end of your car wants to pass you. 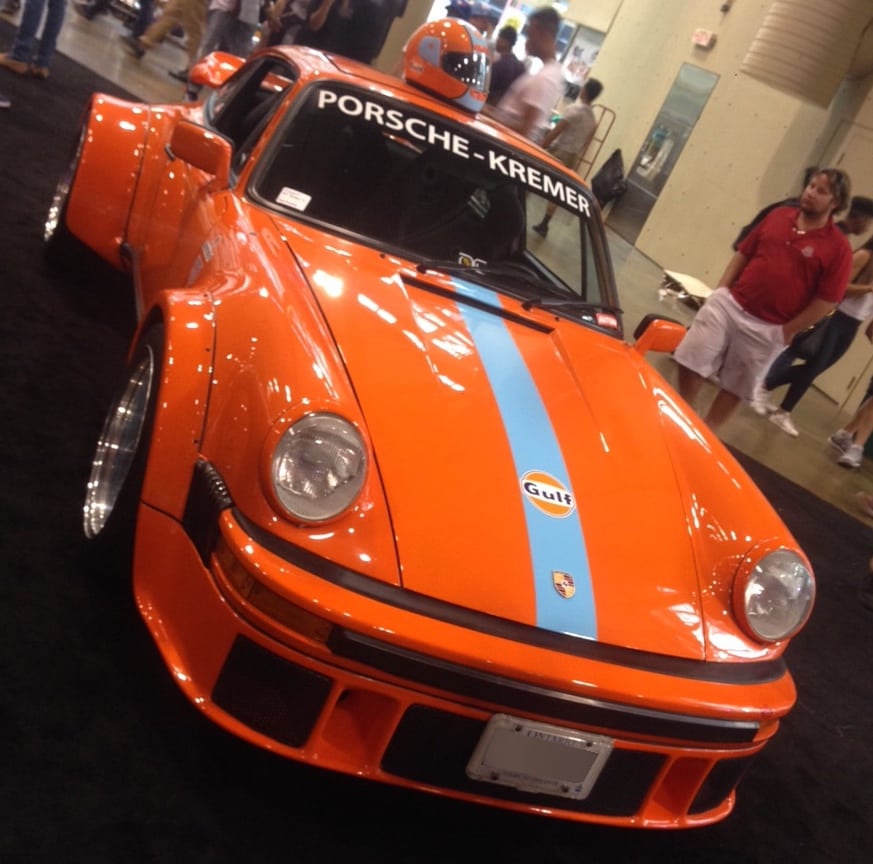 When I finally drove my 934 for the first time in the nearly 2 years it took to build her, it was such a thrill and it still is. The one thing that is ubiquitous to all the old Porsche’s, they are all very different and each one will reward you in a different way. Owning an older Porsche is definitely an “addiction” of sorts and once gone, you kinda feel naked and one always tries to wonder, Why did I part with that car? Then you spend countless hours looking for another. It is definitely a strange phenomenon and as the dictionary points out that it “Manifests itself and is not always understood,” I think is a perfect way to explain the withdrawal process. 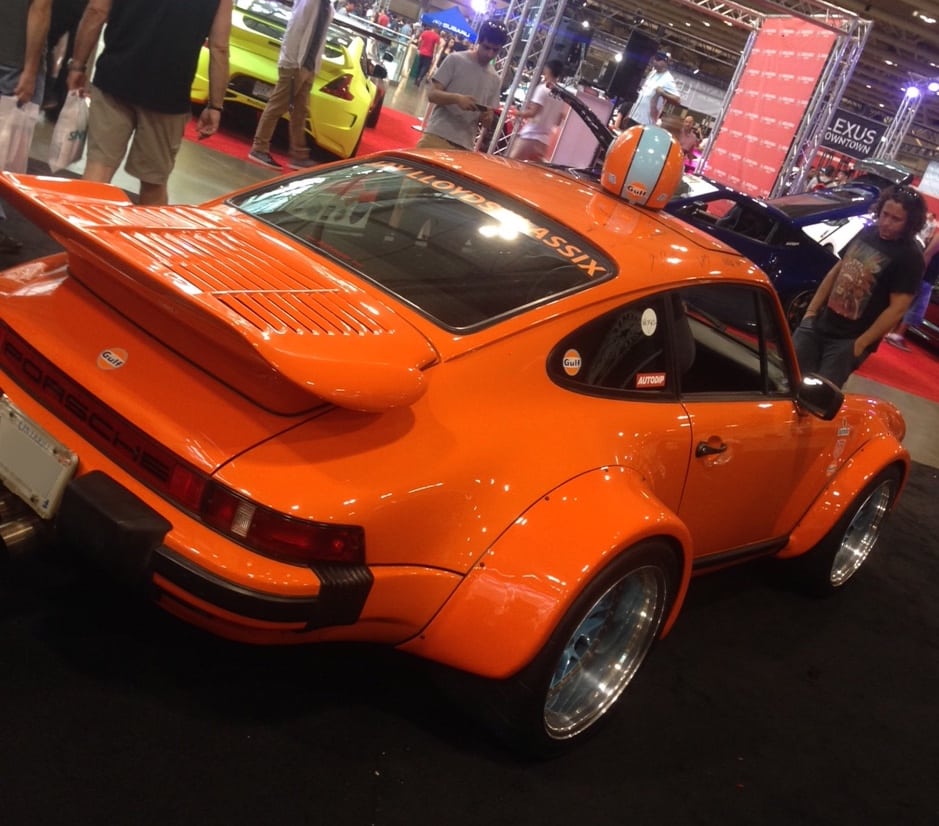 Many people ask me why I don’t track my turbo? It is simple really in that I was lucky to have raced all over the World either as a driver, a mechanic or both, so I have had my thrills, but the main reason, I spent much money, time and effort on my 934 and I just don’t trust myself. There is an old statement that goes something like this, once you get your helmet on, the “Red Mist Stuff” takes over, your mind becomes hazy, your rationale doesn’t add up, this is when things can get out of hand. Expensive and painful are just two of the many reasons why I don’t track mine, but that should not detract you from experi­encing the wonders of your Porsche. Take advantage of the Club, for they have many tools to help you under­stand your Porsche. I promise you, you will not regret it.

My 930 left Stuttgart as wide as Porsche made them, but the stubborn person that I am wanted to follow what the late Vasek Pollak and the Kremer Brothers achieved, these guys pushed the limit of all aspects of the Porsche just that little bit more, when at a time it was all experi­mental, more was always better and when fat wasn’t enough, I made the rear fenders even wider with the biggest tires I could fit under the Jaegermeister orange-coloured enveloping body. So does it really matter how fat is fat or how wide is wide? I wanted the baddest street-able 930 that I could build for me. It took time, money and the audacity to cut up a perfectly good 930, but it is exactly the Porsche that I want to drive.

Type in Jaegermeister 934 on your web browser and there you will see the real deal.