Hi, my name is Andy DeRoos. I’m 45 years young and have been a member of UCR since July 2002. I used to ride/race motorcycles before I bought my first Porsche. Becoming a father forced my hand to trading up to a car, and a 944 was a great transition. I have owned two 944s. I enjoy the track/autocross and social aspects of the club and this is the story of how I ended up with my current 944. My first car taught me a lot of what I needed to know to make the best of the second one. It’s turned out to be a great car and I hope to own it for a very long time. I can’t imagine not being a member of UCR, and having my car featured is an honour. I hope you like the story.

I first got word of the car in November 2009 when I met a guy to buy a race seat from him. He casually mentioned he had a 944 that was in pretty good shape, but was now a parts car because the windshield was damaged, the engine had no oil pressure and he had sold the Fuchs (wheels for those not yet in the know) and the front and rear coilovers from it. He said he would like to get rid of it because it was stored on jack stands in a friend’s garage for two years. He wanted about $700 for it. I told him I was interested, but wouldn’t be able to get it at the moment; I would contact him when I was.

In April 2010 I realized I needed some parts to get my ‘84 944 back on the road for the summer. I emailed the guy and he still had the car. I asked if he could send some pictures of it, which took some time again, and before I knew it, it was the end of May. I decided I was going to buy it, so I offered $600, sight-unseen except for the pictures. I was hoping to get it, use what I needed and part out the rest.

He told me I would need some dollies or something to get it on a trailer, as it had no front suspension. Fortunately I could get wheels on the rear and just happened to have some spares to do it with. I got the dollies and on June 21, 2010 I went to pick up the car with my brother Darren (also a UCR member). When we first set eyes on the car, we were like, “That’s not a parts car! Let’s get it on the trailer before he changes his mind.”

My mind was racing, what was I going to do? I had a 944 already and I wasn’t going to be able to keep both. It took us three hours to load it and was worth every moment. By the time I got home, my brother was buying my ‘84 and I was going to rebuild the parts car. So I started sourcing the parts I needed and working on it whenever I had time. I had a lot of good stuff on the ‘84, which I would transfer over. My brother would just have to settle for the original parts.

The car is a 1985/2 and it had just 113,147km on it when I got it. I got lucky; I searched for a motor and found one with about 126,000km on it, in a car with an automatic transmission. The price was a little steep, but the motor started right up, didn’t make any unwanted noises, and a compression test showed it was even across all four cylinders. Bingo! I was committed now. Of course when you are this deep into a project, a whole lot of stuff jumps out at you that you are not initially thinking about, but it only makes sense to try and do it right. I ordered a ton of replacement parts and set about my four-month journey to putting this car back on the road. Here’s what I needed to get it on the road:

• Exhaust manifold needed to be welded as it was cracked in several places. Darren fixed it and it’s still holding up

• Clutch, flywheel refinished (I had wanted to do a  lightweight SPEC clutch but didn’t have the funds)

• Used rear rotors which were incredibly straight and in great shape

• Wheels (I bought turbo phone dials which were supposed to be straight, found out they were not,  had them fixed and refinished.)

• Inner fender liner for the front passenger side wheel well

• Momo Prototipo Steering wheel (from the ‘84);

I now have an OMP deep dish wheel 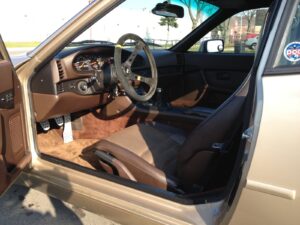 The exterior of the car took only my amateur detailing skills to get it where it’s at today. I added a 3M clear bra kit to the front end to protect the original paint.

My wife and young son were very patient and understanding during the process, and I am indebted to them both.

I did all the work myself, but special thanks goes to my brother, Darren, who with his excellent welding skills and resources helped me a lot. He did an awesome job welding in the oil pan baffle kit and fixed all the cracks in the exhaust manifold. He also helped with the engine install and sandblasted and painted a whole bunch of suspension and chassis parts for me. He also bought my ‘84, and is now a very happy Porsche club member, something he didn’t think possible a few years ago. I love that we are able to do events together, it has made the last few years in the club awesome!

There are still a few things I want to do to the car. The dash lights are very poor but eBay has a kit to, supposedly, fix that. I built (with a lot of help from my brother again) a three-inch stainless exhaust with a Magnaflow muffler that sounds and looks great, but is a bit too loud for the street; I plan on putting a resonator in to tone it down a little. And there is a mass air flow/camshaft mod out there calling my name. Right now, however, home renovations are taking priority. 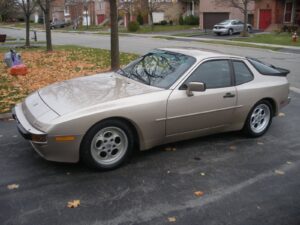 Other mods I have done include spring plate polybronze bushings, 28mm torsion bars, and 250lb Weltmeister springs in front. I also purchased a very red but super comfortable racing seat, which I install for DE and autocross. The only unwanted maintenance I have had to do was the head gasket/valve seals in June of 2011; otherwise the car has been very reliable and very enjoyable.

It was Mid-October 2010 when I finally got it on the road and WOW was I ever glad I had committed to bringing it back to life. The final result was way more than I had anticipated it to be. It confirmed what I already knew: Porsche builds incredible cars.

I hope you’ve enjoyed my story and I look forward to reading others. Thank you.