Home »Provinz»FEBRUARY SOCIAL – Celebrating the Year of the Horse 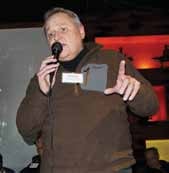 Jay showed beautiful pictures of race cars he has built over the years. He told us stories of the 1970s-1990s when he worked in Europe and Asia and travelled extensively with racing teams to build and rebuild Porsche race cars that competed at top racing circuits around the world. In 1980, Jay joined the Roitmayer GMBH Racing Team (Munich, West Germany) and spent several years working on 935s and RSRs that competed at the Nurburgring. In 1985, Jay opened his own Porsche workshop, Lloyds Motors, in Hong Kong. He formed the “Lloyds Motors Racing Team” and raced the Macau Racing Circuit.

In the 90s, Jay moved to Toronto and opened his own Porsche workshop, Lloyds Autosport Inc. In August 2013, he joined Porsche Centre Oakville. Jay showed us pictures of a Speedster project he has been working on for the last three years. The Speedster belongs to one of our members, and Jay basically started from scratch with a 1994 Speedster shell.

He finished his presentation by saying that the Classic Porsche market has a very good future. Classic cars apparently have a 10-year rate of return of +430 percent, compared with the next highest performer, gold at +273 percent.

The evening ended with draw prizes for six lucky winners. Henry Au won the grand prize, which is a wall clock made from a racing brake disc with a red caliper, donated by Jay Lloyds. We thank Jay for his inspirational speech and generous donation of the grand prize.