It’s not a real Porsche.” “It’s a soft roader.” “It’s ugly.”I have heard many comments about the bestselling vehicle in the range. Here is the story of mine.

This is a poverty-spec Cayenne. No navigation system, nor sunroof, no extra leather, no premium sound system, no large wheels, nor air suspension. It has the V8 engine, heated seats, and Xenon headlights, all necessary for its role. From the beginning it was intended to work hard and it has. Having reached 100,000km, it has had a very varied life. 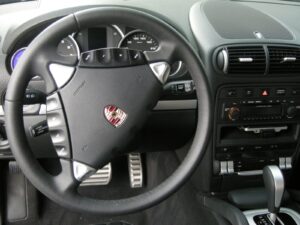 This SUV has never been garaged, and has been across very challenging abandoned mining trails in Arizona, deep Canadian snows, and numerous long-distance towing assignments with 5,000 lbs behind it.

Reliability has been outstanding. There was a single major recall for a fuel pump, which was done as part of a routine service. Apart from that, the only failures in five years have been a rear number plate light and a leaky windshield washer bottle. That’s it.

After countless miles on the highways of the US, I recently replaced the windshield which finally had one stone too many after several patches. It has never failed to start, even after sitting outside for weeks in the winter without being used. Up to about 20,000km it burned oil at the rate of around a litre every 1,000km,but that stopped completely, and it has burned zero oil between services ever since.

It is certainly showing some signs of wear. With a lot of miles on busy highways, and some off-roading through sharp cactus, there are numerous paint chips and scuffs. The right hand side of the driver’s seat has developed a few mysterious pinholes, the cause of which I can’t explain. It drives as if new, with no rattles or vibrations, despite its hard life. There is no rust anywhere.

Here are a few of the tasks it has performed:

In this role it is simply outstanding and can cruise at highway speeds with a loaded trailer, taking even long hills easily, though occasionally dropping to fifth gear. It is essential to fit a good trailer brake controller for this purpose, and Cayennes are quite difficult to get right in this regard. However, we have one and its fine now.

I was very impressed by how versatile it is on tough roads. very challenging abandoned mining trails in Arizona, deep Canadian snows, and numerous long-distance towing assignments with 5,000 lbs behind it. 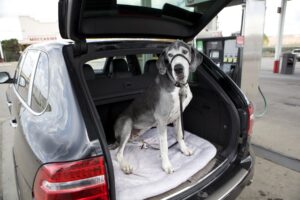 The back seat folds down easily, and even with the seat up, is perfectly comfortable for even the largest dogs.

Even the deepest snows have been no trouble for the Cayenne. I do use a second set of rims with winter tires.

It has the handling of a good, fast sedan, with very low interior noise and extremely comfortable seats for journeys that stretch to 4,000km at a time. Steering is crisp and responsive, and braking is excellent. Fuel economy is not great, about 19 MPG unloaded, and 11.5 MPG with a loaded trailer.

The Cayenne S is a tough, comfortable, versatile and utterly reliable SUV, with both S and U actually being a very appropriate description for it. I intend to keep it until it is finally worn out, and I suspect that will not be in the near future.I have gone up 45 degree hills in low range, scrabbling slowly up rock-strewn trails and down the other side where there is no sky visible in the windshield. Although not quite as able as my Jeep, it as good or better off-road than any other SUV in its class.

Previous articleClash at the Glen 2013
Next articleRoad Trips February 2013