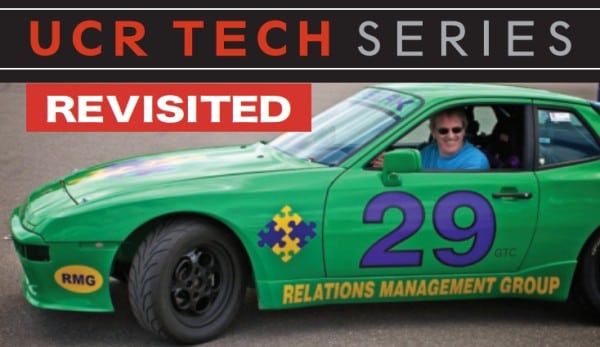 The Technicalities of Getting from Street to Track…
Sixty-seven hours of track time results in repair time
Story and Photos by Phil Downe, UCR Member
Click on any of the figures to get a full screen view

Ferry Porsche was known to prefer to see his cars with stone chips, as it showed they were being driven. The cars he built were tough and track-focused from the beginning – capable of taking an unusual degree of punishment. However, as with any mechanical object, wear is a given, particularly with my 944, which has had considerable use in track events over the last few years, and was set up exclusively for that purpose.

The PCA track community is a great place to get to know other people who enjoy honing their skills at DE events, make friends, to improve your own skill, and additionally to learn about the mechanics of your particular car. I have previously written about setting up the car for its life on the track in the2010 Provinz series, “The Technicalities of Getting from Street to Track”.

Now after twenty-eight months and fifty-two track days with the 3-litre engine upgrade, the inevitable occurred and it was time to deal with the results of sixty-seven hours of running hard.
The first signs of trouble with the left rear was when the self-locking axle nut started working its way loose. Running down the back straight, the car felt like a wobble wheeled shopping cart. Not quite that obvious, but still little directional changes that seemed to come from the rear while under acceleration and then pulling left under braking.

Back in the paddock we found the axle nut had worked loose and was a couple of millimeters off the seated position. When this occurs keep in mind that the only thing holding the rear wheel straight is the brake caliper and rotor.

The first time it happened we just torqued it back to 340 foot-pounds and kept an eye on it. After the second time we replaced the nut and when that one also came loose it was obvious that the bearing was now damaged and needed to be replaced. No amount of tightening or Loctite was going to help.Of course, as soon as something like that happens you start to hear the bearing noise, which wasn’t as obvious as one might think since the car has a modified exhaust. I probably could have driven out the season just keeping an eye on it but when the second problem arose and the transmission wouldn’t shift into first gear, it was time to schedule a trip to Kingston and spend a day in the garage at Blaszak Precision Motorsports.

Markus and I pulled off the wheel, brake caliper and rotor, removed the half shafts and exhaust system since we needed the room to work, and the transaxle had to come out anyway. Once the hub assembly was removed the extent of the damage was pretty obvious. The rollers looked like chocolate balls smothered in a rust-colored syrup.(Fig. 1) Water had obviously gotten into this bearing in the past. Getting the outer race out of the trailing housing was the next chore. The press-fit bearing was tight to the trailing arm bore. To remove it without damaging the trailing arm, we heated up the housing to expand it before driving the bearing out. The inner wheel-bearing race portion was also fused to the wheel hub shaft and it had to be slit to relieve pressure so that it could be removed. (Fig. 3 & 4)

The last time that bearing was replaced, it was obviously done by an amateur. There were punch marks (fig. 4) in the housing from a cold punch-out and straight-line gouges (Fig. 5) indicative of the new bearing being cold pounded back into place.

We then cleaned up all the high points and expanded the housing with heat once again to seat the new bearing easily into place with a dead-blow hammer, using an old bearing case as the punch (Fig. 6) to ensure it went in without damage. (Fig. 7).

Inside the trailing arm housing we could see the damage the loose stub shaft made during the wobbly phase. The axle shaft had been forced off of center and left telltale metal etchings on the inside of the housing. (Fig. 8)

Now we were on to the transaxle. As the fluid drained we saw the first indication of the internal problem. The transmission fluid wasn’t clear as expected but cloudy with particulate material in it. Once drained, we dropped the unit and set it up on a custom-built transmission bench with a pivoting support arm so you could rotate it 360 degrees. Further evidence of trouble was apparent once the tail housing was removed. The collector magnet was spiked with metal fragments (Fig. 9) but there was no evident wear on the gears that were exposed so far. (Fig. 10)Piece by piece was stripped off as we hunted for the problem. Fifth gear, third and fourth removed, then the rods and shift forks. I must admit I was a little in awe with the myriad of connected parts and gained a new respect for the mechanics and engineers that design and build these things.

Finally with a collection box full of pins, rods and gears lying on the bench we were down to the first and second gear assembly (Fig. 11) and through a process of elimination found we could move the slider hub by hand into second gear but not into first. Four tons of pressure was needed to push the main shaft out from first gear assembly and there it was—cracked first gear synchronizer ring. (Fig. 12)

Markus gave me that look like… How did this happen? I’d prefer to blame it on a manufacturing defect but I have to admit I do recall going deep into the braking zone for corner three, down shifting from fourth to third only to find myself out of gear as I got back on the throttle mid-corner. A little panic set in as the rear end got light and I could feel it coming around and in haste I may have missed third and shocked that first gear synchro instead. An expensive mistake, so next time, hopefully, I’ll just accept that I blew the shift and ride it out on the grass at the exit and try and explain my incompetence or brain fade to the UCR “attitude adjuster” of the day.

With a new synchro in place the reassembly was amazingly fast. It’s really beautiful to see a professional at work sliding every little cog, rod, fork and pin back into its place out of a jumble of parts from a box. The fact that he stocks all the parts for this and can break it down, fix it and install it again all in the same afternoon is simply amazing!

Well with everything torqued back into place I’m back on track for the last two DE’s of 2012, hopefully a little wiser but definitely with a lot more respect for the equipment we all try to master on each and every track day.

OBJECTS OF DESIRE – Wondering where the lion is