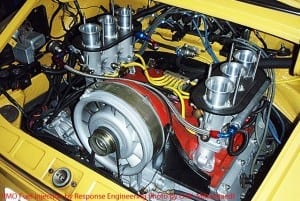 Fuel injection has become the standard fuel delivery system for automotive gasoline engines. It has made possible the diverse goals of fuel economy, low emissions and power. Lets look at why from three aspects of fuel delivery – fuel-air ratio,  atomization, and cylinder-to-cylinder distribution.
In the beginning, there was the humble carburetor. Contrary to what people used to think, this is a really uncomplicated device. I once took one apart under a street lamp to clean out some dirt that had me stranded. The principle of operation is straightforward.  Fuel is pulled into the air stream by the vacuum that can be generated by the air flow through the carb.  This means that only a fraction of the atmospheric pressure of 14.7 psi (101.3kPa) is available to move and atomize the fuel. Since the carb is a simple device that makes use of a few discrete “circuits” to react to load, the air-fuel-ratio is only optimal at a few points in the operating range. As the fuel is poorly atomized, and it must be carried in the airflow to the different cylinders, it is difficult to deliver the same amount of fuel to each cylinder. Heating the manifold helps vaporization, but hurts power. In the 80’s there were attempts by Detroit for forstall the inevitable by making carbs where the jetting was computer controlled.

“The unsung hero of this story is the US EPA”

The next step up from carbs is TBI (Throttle Body Injection). Here the carburetor is replaced by a throttle body with one or more fuel injectors.  This is better than carbs for a few reasons: computer control is used to determine fuel air ratio. A high pressure ( 50+ psi) fuel pump means the fuel can be atomized to smithereens, resulting in better, but not perfect mixture distribution. This is the easiest to engineer. You can whip off the carb, and whip on the throttle body injection at minimum cost. Aftermarket versions of these are available for 4barrel applications for $2000 complete.

Port injection is todays standard. Fuel is sprayed directly into the port(s) for each cylinder. Mixture distribution is perfect. There are many variations on this technology. An electronic version of this was introduced in 1968 by Volkswagen on their Type 3 1600cc Notchback and Squarebacks ( when did you last see one of these !). Mechanical versions could be found on 50’s Mercedes’ Gullwings, and 1969-89 Porsches, among others. Other than mechanical vs electronic, the biggest difference in port injection systems is whether or not the system has a mass-air flow sensor. Without a mass-air flow sensor, these systems must ‘estimate’ the fuel required on the basis of rpm, manifold pressure and temperature. In other words, if it’s Tuesday, it must be Belgium, like the 60’s movie. CIS (Continuous Injection System), as used in Porsches and others up to the late 80’s used a mass flow sensor, in an essentially mechanical system. The acronym you will hear very often regarding electronic non-mass flow systems is MAP (Manifold Absolute Pressure ). The fabled, early Corvette FI was mechanical, using a venturi to measure air flow, whereas a carb uses a venturi to suck fuel directly.

Direct injection is the current premium system. Exactly like a diesel, fuel is sprayed directly into the combustion chamber. This requires fuel pump pressures that are an order of magnitude greater than for older fuel injection systems: 500+ psi. More power and better fuel economy can be achieved for two reasons.  Evaporation of the fuel inside the combustion chamber cools the mixture and allows higher compression ratios. Port fuel injection has some of this effect as well, but most of the evaporative cooling is lost on the intake valve and port. A secondary effect is that only air flows throught the intake port. None of the intake volume is taken up by fuel.

The precise control of air-fuel ratios and distribution have make the modern muscle cars possible. Current Corvettes can make 500+ horsepower, get 30 mpg on the highway, and have a clean exhaust. In the carb days, a car with a hot cam will not even idle. With electronically controlled port or direct injection, you can run pretty much any cam you want and still get smooth running at low speeds. The aforementioned Corvette is only turning a thousand RPM at highway speeds. Older technology would have been bucking and kicking running this way.

Starting in the 80’s people were ripping the fuel injection off Porsches and putting on triple throat carbs. There were a couple of reasons. Perhaps the most important is that car enthusiasts are a very conservative bunch and didn’t really trust and understand fuel injection. Another is that Independent Runner (IR) systems can actually produce more power than plenum intake systems, such as are usually used with FI. In IR, each cylinder has its own throttle plate. With a plenum, multiple cylinders are fed from a common volume that has effectively, one throttle plate. It’s a complicated subject, but simply put,  cylinder scavenging of exhaust is far from perfect. Since intake cycles overlap whenever you have more than 3 cylinders feeding a single plenum, when an intake valve opens, it sends a pulse of exhaust into the plenum, fouling the intake stroke of other cylinders where the intake is open.

The unsung hero in this story is the US EPA(Environmental Protection Agency). The EPA forced the car manufacturers to produce clean, accurate technology. The capability to produce more power is a happy byproduct.

OBJECTS OF DESIRE – Wondering where the lion is