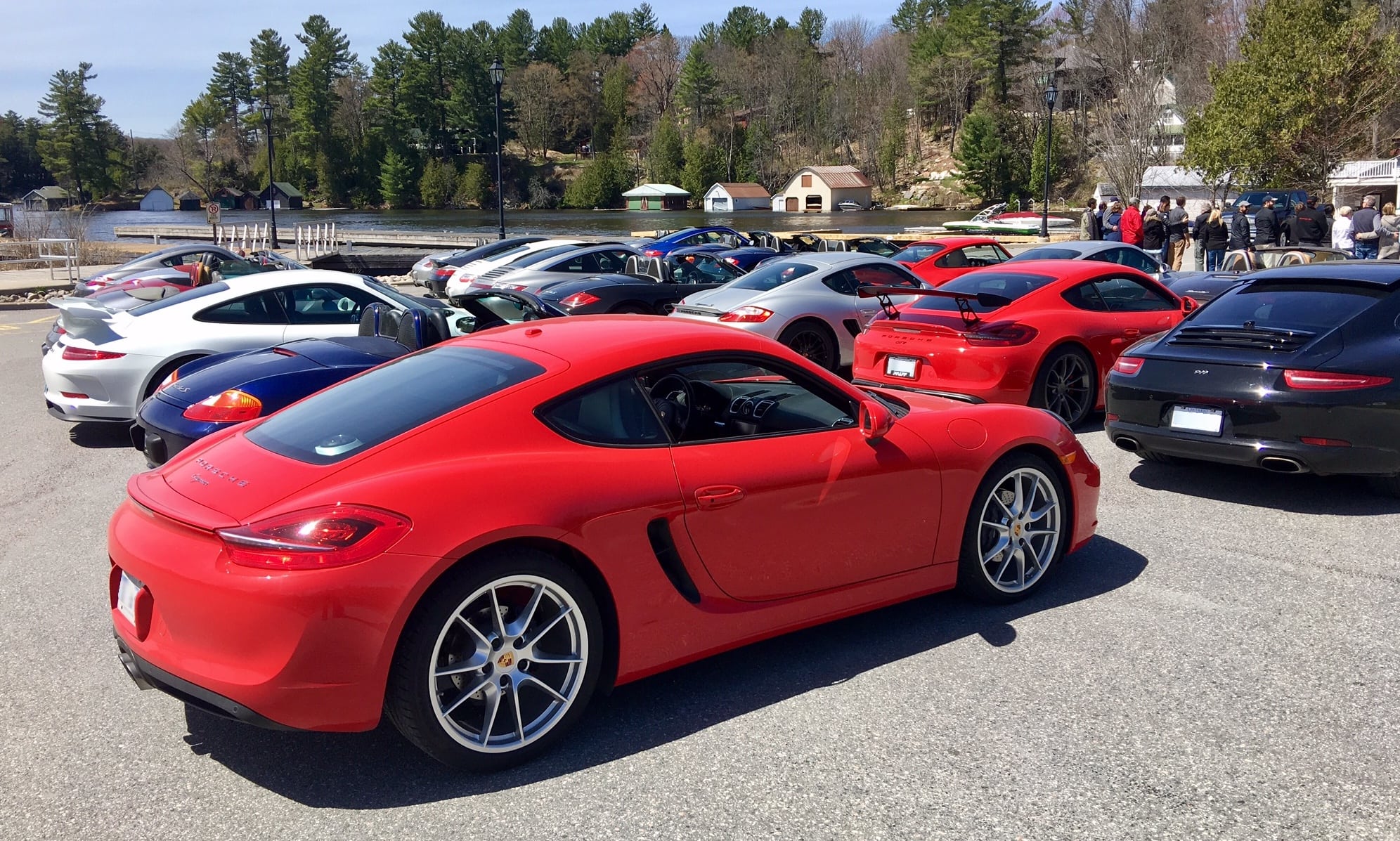 Another successful event, courtesy of Peter Hoffman and Umberto Duarte. Twenty-five cars, 48 participants, literally everyone showed up, even one driver who hiked up from Niagara Falls to our early morning rendezvous north of Orillia. That’s commitment! What could be better than a fun run, in your Porsche, over twisty, turny roads through forests, flat barren rocks, cutesy little towns that are just waking up from a long winter. Spending this quality time with old friends and new. We are all so lucky in so many ways. Muskoka is one of those rare places in this world that offers just enough in terms of roads and amenities without being too rustic or too slick. Southwood Road, which was part of our morning run, has to be one of the prime roads to take a Porsche in North America. If you haven’t driven it yet, you should—catch it just over the Severn bridge on Highway 11.

The tradition of Muskoka and UCR began in 1995 with a July 2-day, 2-night weekend filled with great roads and completely unexpected events. It began like this: I proposed a weekend event in Muskoka to the UCR executive. According to the then president, Patti Green, the success of events like this was pretty spotty. The club was very much at the time skewed to track, there were not many social events outside of the monthly meeting. But it was worth a try and, if successful, would broaden the appeal of the club. 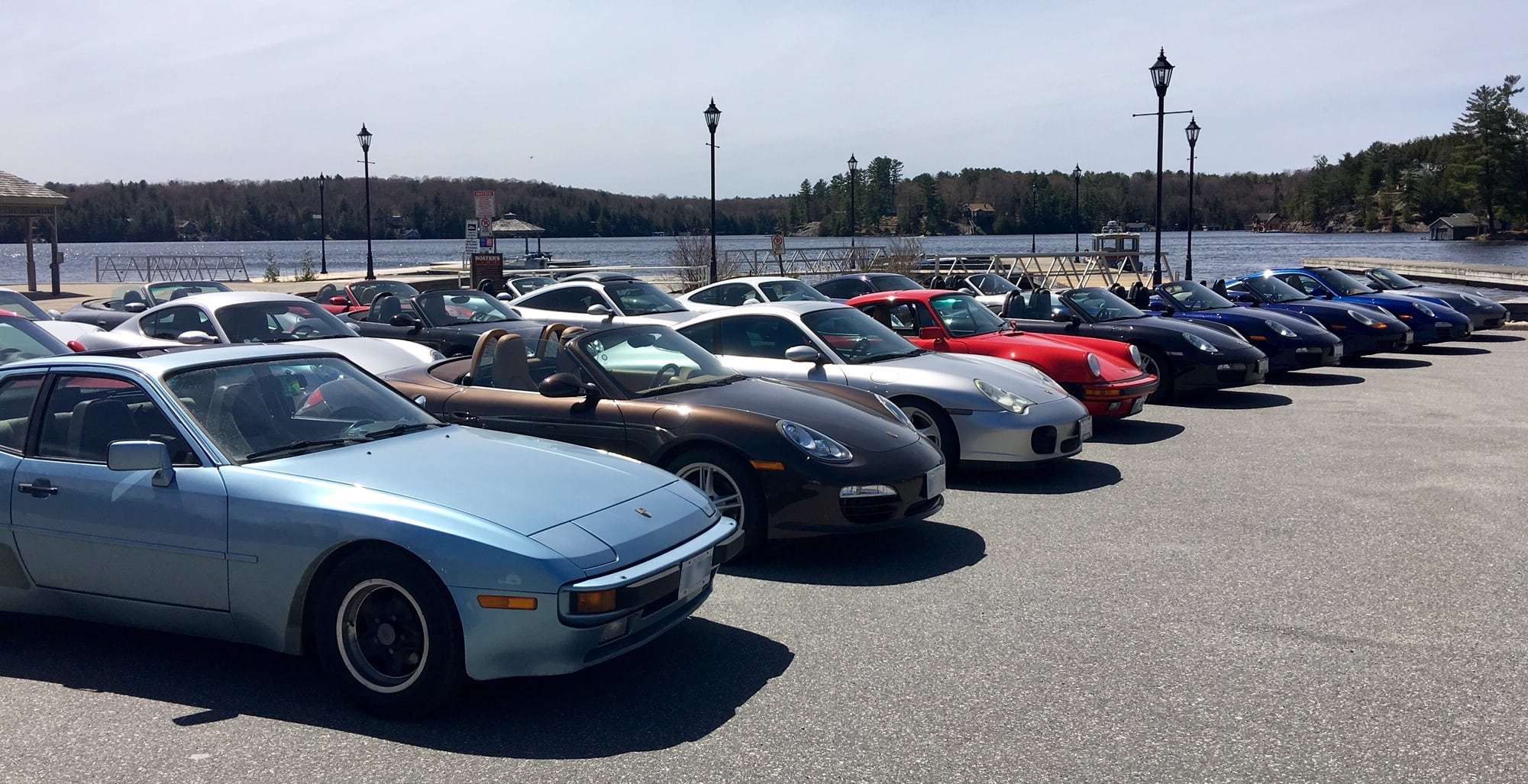 So a weekend in July it was with 25 cars, It was blistering hot, over 30 degrees. Little did we know that a tornado would go through Muskoka on the Friday night, shutting down power and wiping out a few forests and roads. While Carol and I were staying at the cottage, everyone else was at the Bala Bay Inn which for some weird reason was the only building that kept its power. So everyone in Muskoka in search of coffee Saturday morning were storming the doors of the Inn, while our members enjoyed their breakfast, a bit of luck.

We had carefully mapped and driven the route the week before and all was clear. But a tornado can wreak havoc. Everything went well with Terry and Irene Orr in their beautiful Speedster leading, when a 100-yard patch of gravel that hadn’t been there the week before appeared. Dead stop! It took a bit of convincing to get Terry to slowly drive that section, the alternative being to turn 25 cars around. Saturday night we took in a Muskoka Festival play at the Gravenhurst Opera House. It was one of those plays where the actors wear layers of clothes to do a quick change. The A/C had been knocked out by the tornado, so you can just imagine with the theatre probably hovering around 35 degrees what it must have been like to be one of the actors. But the show must go on…so they say. And Porsche owners are a tough lot, we had only a few pass out during the performance!

Sunday was another run over different roads, this time all going well and ending at what is now Taboo Resort. We had a wonderful lunch on their patio. Just inside the doors to the main restaurant, someone discovered a very appropriate framed photo. It was of Porsche 356’s and Auto Union’s racing on the ice of Lake Muskoka in front of the Resort! Had to be late 50’s or early 60’s as the organizers were all wearing fedoras, trench coats and ties…out on the ice!

So that was the start of many Muskoka weekends and fun runs for UCR, often with 30+ cars, finding different routes as far north as Algonquin Park, with couples and sometimes whole families taking part. So it became a way to share in the love of Porsche cars even more. It is great to see that the tradition is alive and well.

PANAMERA GETS A NEW BODY

My Pathway to Porsche