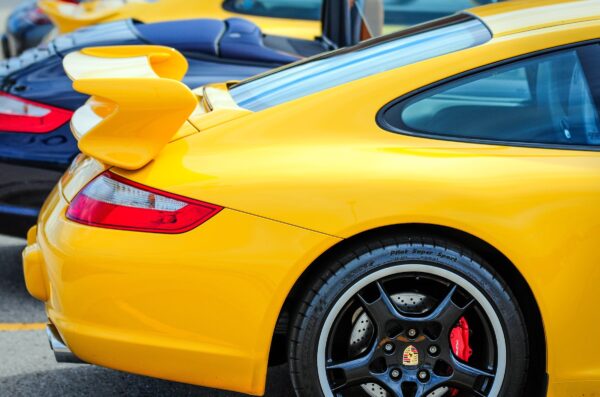 A rather cool morning greeted us as my wife and I opened the garage. A top-down day to be sure, but jackets were required.

The blue sky was dappled with white clouds as we made our way south from Barrie to Aurora… always a wonderful drive on a Sunday morning.

Surprisingly, only four Porsches were there upon our arrival, considering the nice weather. Perhaps, the opening of the CNE, or maybe the Marques d’Elegance, drew the ‘moths’ away?

Then, another 911 appeared… it was speed yellow as well, sport exhaust (by the sound of it) and sport design lip and spoiler equipped. It parked beside our dark blue cabrio, which was now the filler in a speed yellow sandwich… nice!

Two hours passed quickly as we shared good con­versation and coffee (and photos were taken). 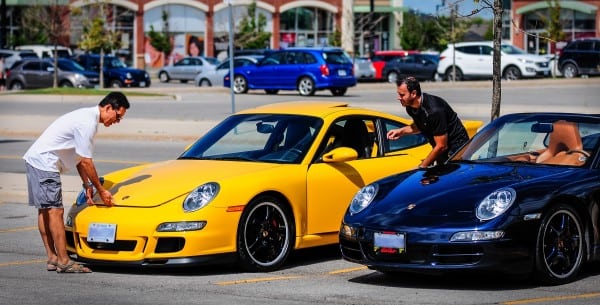 Barry moved his Boxster to a nearby isolated spot to have some photos taken and inadvertently man­aged to reconfirm something about parking Porsches in secluded, isolated spots in vast, empty parking lots. It took all of 2 minutes, but someone drove up and parked right beside the Boxster! 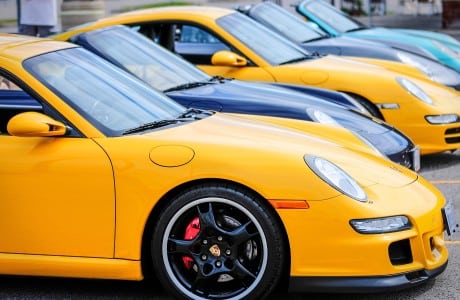 There’s bad news and good news to end the story.

As Barry, Will and Rob made their way homeward, a Police SUV stopped Rob. That’s bad.

The good – the officer wanted to check that license, registration and insurance were in order (they were). Then, the officer had many questions about Rob’s speed yellow 911…seems the officer is a car nut too!

Atta-boy, Rob! Only had the 911 for a week before getting stopped! Darn yellow!