A Memoir From Pit Lane

Racing. It’s every young boy’s dream. Often though, many youngsters are unable to realize that dream until much later in life. Life responsibilities seem to pile up year after year, and before long racing is a faint memory. However, for an eager and determined few, that memory is kept alive, and when the time is right the decision is made to follow their dreams. By this time, of course, you may have a few kids and a spouse to share the excitement with, which makes it all that much more fun! 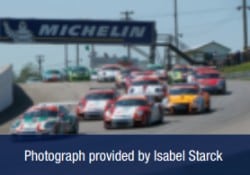 The following is my account of Ilker’s first year of racing in the 2012 GT3 Cup Challenge Canada IMSA Series.

The adventure begins in Asia with the purchase of our sixth Porsche, a 2010 GT3 Cup Racecar. Ilker had just finished his first season racing in the CASC Regional GT Challenge Series, when plans for 2012 were on the table. He found the best car for the money and it was in Hong Kong at Jebsen Motors. Soon the car arrived. What an exciting day. I recall going to the bonded warehouse near Pearson Airport to view it for the very first time. She was a beauty, and a monster all wrapped into one.

As winter ended we were ready for the season to begin. I felt confident Ilker was in the best hands with our team. I didn’t feel the uncomfortable anxiety at the start of the 2012 season as opposed to last year. Especially considering we had just discovered we were expecting our first child and daddy to be was going to be participating in a high-risk hobby.

The first race proved racing is racing and you can’t control everything. After watching Ilker wiggle through turn 10 a number of times, we realized his throttle was stuck and he was having trouble downshifting. I couldn’t wait for the 45-minute race to be over. Finally, with two races down in the 2012 season, Ilker brought the car home in one piece and I was relieved. Although he didn’t make it to the podium, I was truly proud of his performance and of our team.

July brought us two racing weekends, first at the Circuit Mont Tremblant in Quebec, then back to CTMP/Mosport, sharing the weekend with the ALMS field. At Mont Tremblant, Porsche Cars Canada hosted a mixer for the drivers and guests where we could mingle and get to know one another. I was happy to meet fellow racer wives and girlfriends and talk about the experiences shared while watching our men on the track. Racing makes the men in our lives happy, and they are truly passionate about it. None of us could ever imagine them giving it up, it has become such a part of their lives. 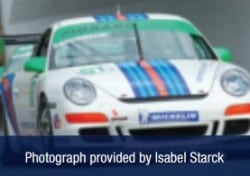 On race day, Ilker was running well, keeping out of trouble, and inching himself forward with every lap. Near the end of the race he tried to make a pass, and spun the car. Needless to say, he lost all the hard work of inching forward, but with luck on our side he was able to save the car and brought her home unscathed.

The ALMS weekend at CTMP/Mosport was quite a success for us as a team. A guest driver, Chris Green, took first in both Gold Class races, setting class and track records for the series in our SCB Racing car. It proved to be a group effort as Chris and Ilker were running side-by-side for most of the races. Sadly, Ilker’s car experienced a mechanical failure and our hopes of finishing on the podium were lost. It was here that I felt a deep feeling of disappointment, as I was on pit wall when he came in. The control arm had broken and he was out of the race.

Luckily our team was able to repair the failure in time for race two. Again, Chris and Ilker were side-by-side at the front of the pack. The track was wet for the start, but with clearing skies on the horizon everyone ran on slicks. Whether it was driver error or just racing, Ilker spun in the first lap, placing him at the back of the pack. I couldn’t believe the luck. But still, I was very happy he was able to bring the car and himself home in one piece.

Finally, we had reached the season finale held at Calabogie Motorsports Park. It was quite impressive to see our series was the headliner for the weekend, with advertising throughout Ottawa including a huge banner at the airport. This must be what the pros feel like. Unlike the previous weekends, both races were on Sunday, with only four hours between them. I remember it well, as I arrived just 60 minutes before the start of race one. Ilker and the crew had already been there for two hours or so and were already gridding up. I made my way to him in the middle of the paddock, and just as I wished him a safe race, I felt an uneasy feeling in my belly. Being pregnant, I wasn’t sure what it could have been but I knew I had to sit down, and fast.

Not 45 minutes later at the start of the race Ilker was involved in a very serious crash, which sent a driver over the rail in turn three. I was on the upper deck of the Porsche Club when I heard the news on the announcer’s radio. Car number 59 was involved in an accident, three cars were involved, and I knew Ilker was right beside him on the previous lap. My heart sank. My stomach constricted. I looked to pit lane and I saw our crew chief give the “wrap it up” signal. It was the longest 10 minutes of my life. The team tried to set me at ease and assured me he was all right, but I didn’t believe them until I saw for myself. Shortly thereafter Ilker arrived in the tow truck with our #48 loaded. He was safe and unharmed, as was Jim Hoddinott, the driver who landed over the guardrail. I was relieved, then the emotions took over and tears began to flow.

I AM THE NEW RSR