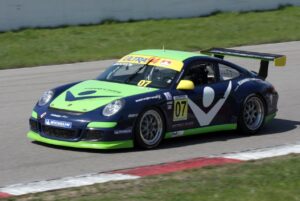 Tim has rebranded his Northwest Atlantic team to “Racing for Joanne’s House”.

Every day a young person knocks on their door. We are intent on raising awareness to a need in our area. Everyone we have talked to has shown enthusiasm and support for our efforts and the whole team is excited about the upcoming season.”

On Saturday, May 18, Tim moved up from 12th starting position to finish 11th overall in Race 1. His best lap time of 1:24.116 is now a track-best time in the Gold Cup category. His first place was followed by Carlos de Quesada of Pfaff/ Alegra Motorsports, who was second, and Martin Barkey with Fiorano/Garage Racing, who finished third. 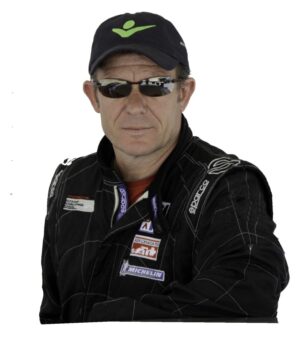 In Sunday’s race, Sanderson was joined again on the podium by Carlos de Quesada in second place, and SportsCarBoutique’s newest entry, Andrew Danyliw, who finished third in the Gold Cup standings.

Tim finished in the top five in the Gold series of the 2012 GT3 Cup Canada.

“It was the perfect start to this season,” said Joe Lawrence, president & CEO, Porsche Cars Canada, Ltd. “The weather was fantastic, we saw a tight race for the podium, and the new track accommodations enhanced the entire experience.”

The Northwest Atlantic Motorsports/Joanne’s House team hosted representatives of Joanne’s House at the track over the long weekend, and will again at the Mobil 1 Presents Grand Prix of Mosport from July 19 to 21. They also made two spots available on the race team’s pit crew for Joanne’s House alumni on those weekends, providing the young adults a chance of a lifetime opportunity to experience working for a race team.

“We are thrilled that Tim Sanderson has chosen to race for Joanne’s House,” said Mary Dunlop, executive director of Joanne’s House.

“This is a wonderful opportunity to raise awareness of youth homelessness in the Durham Region and the prospect of some of our youth going to the track is awesome. We are grateful to Northwest Atlantic Motorsports for partnering with Joanne’s House.”