HAVE PORSCHE: WILL TRAVEL – My Porsche Introductory Driving School Journey 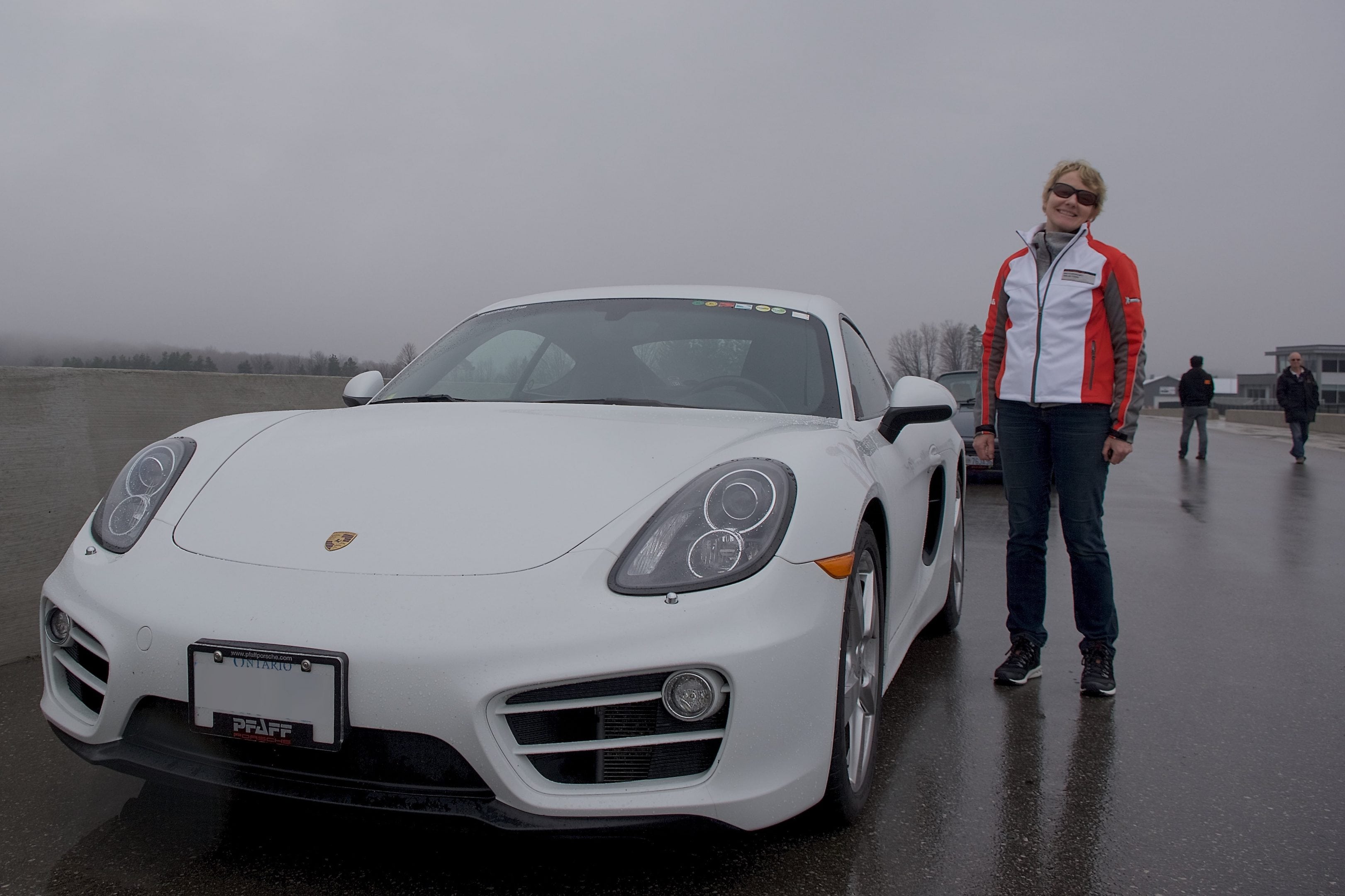 So …“Hey, Carolyn,” my husband said, “the Club has an introductory driving school in mid-April. I think that we should sign you up.”

“Huh?” I said, while hanging up my mountain bike. I guess I didn’t have anything wittier to say at the time.

“Listen,” my husband persisted, “I know that you have some track time doing HPDE at Calabogie, but this will give you more formal instruction with Porsche instructors. Look, there’s a skidpad, collision-avoidance exercises and some time on the Driver Development Track, all at Mosport!”

“Oh, you mean Canadian Tire Motorsports Park, honey” I noted, distractedly, “That sounds great, but how are we supposed to get there? We haven’t packed two of us in our Cayman for two overnights… ever!” 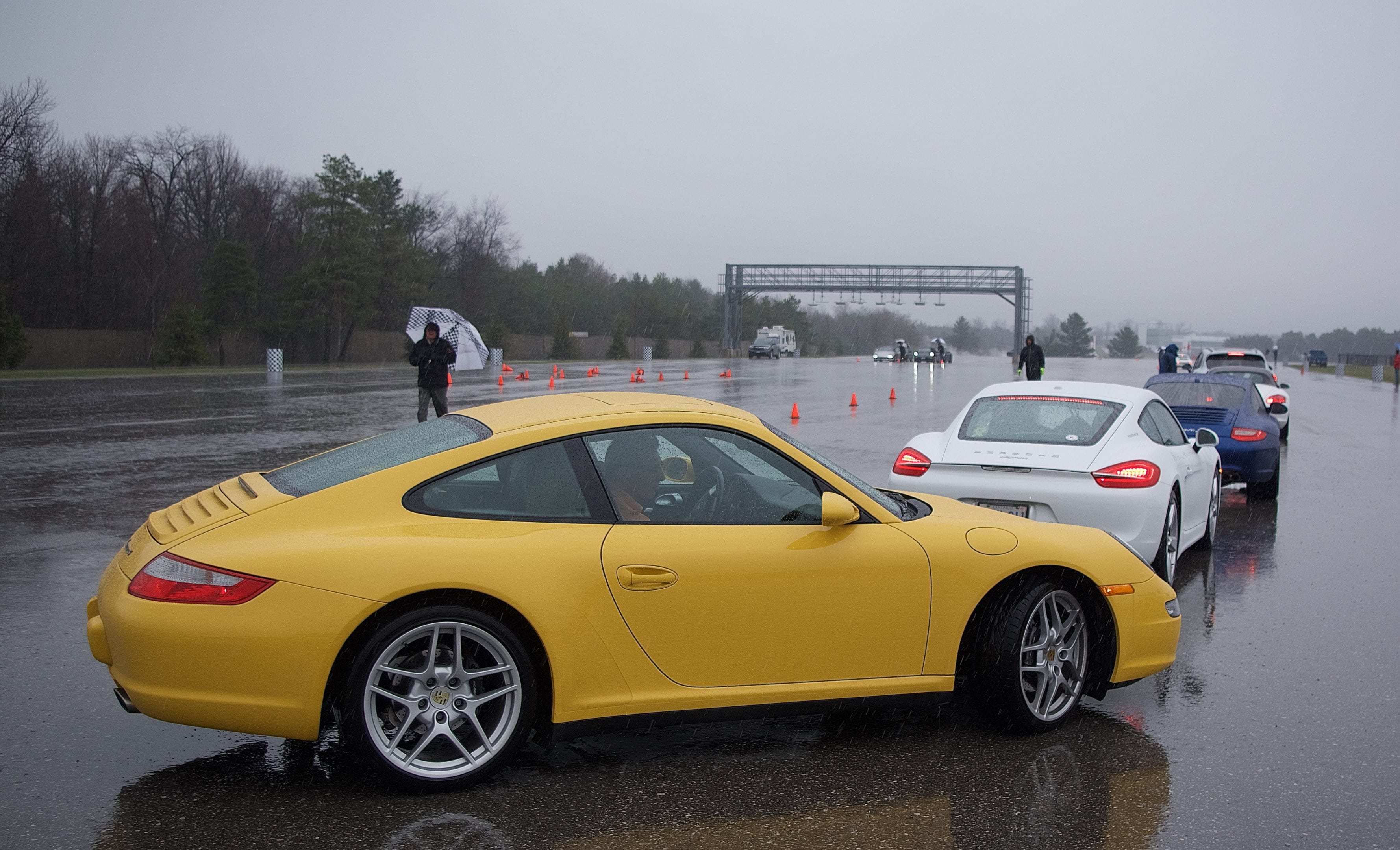 And that’s how I started my journey. Practicalities dealt with (great sign-up process, acceptance, packing our dogs off to the kennel, and stuffing husband and luggage into our 2014 Cayman), we were off on a beautiful sunny day along Highway 7 from Ottawa, traversing the smooth blacktop (don’t tell anyone how good the highway is – it’s our secret!) through Peterborough and linking up with Highway 115 before checking into our hotel in Bowmanville, just down the road from Mosport… er… CTMP. I was full of happy anticipation of the next day’s events, though a little worried about the showers, which were being forecast for the next day, April 15th. Just showers though!

The next morning, we were on our way bright and early for the 0800 start, watching the clouds approach inexorably from the west. Just showers forecast though, right? My husband was at the wheel (the only time he got to drive that day! Well, not quite right; I allowed him to drive me to dinner later) with me giving “helpful” navigation suggestions as we wound through back routes to CTMP’s doorstep, arriving right on time for the registration. Lots of self-talk ensued, “OMG, look at all those lovely cars! Is that GT3 going on the track? Look at that beautiful Porsche in Martini Racing colours! Concentrate girl…”

This was the first time that I’d experienced a Porsche driving school. Right from the beginning I was impressed by the organization and the overall professionalism of the instructor cadre. The classroom session covered all the basics of car control, including reminding us that those four little tire contact patches (bigger if you have a 911!) are all that are keeping you on the road and track and that you must thus manage your rubber wisely! The group, fellow students and instructors alike, were very welcoming to us female participants (I think that there were three) and I never for a moment felt out of place. What a great start!

We broke off into our three groups of ten cars, just as the first few drops of rain (just showers forecast, though!) started falling, the instructors grabbing their umbrellas as they headed off to the skidpad, collision avoidance, and track stations. My husband grabbed his waterproof camera and lens and followed me as I made my way out to the skidpad station and the rain started falling more sincerely. Umbrellas were out, including some pretty impressive golf umbrellas that people shared with me, as the smiling, enthusiastic instructors explained the exercises. The emphasis, as proven out during other stations too, was on having fun.

One car at a time took to the skidpad, as the instructors cycled through the various passenger seats. Soon it was my turn (we each had two turns) and an instructor leapt into my passenger seat, explained what I needed to do, and then coached me through an absolutely hilariously-fun series of fast ever-tightening circles until the PSM finally said “no more” and the car spun out while I was drifting around the skidpad. Even Caymans can drift! Very soon the water truck, usually employed to wet the skidpad, was made redundant by the monsoon. Hubby looked like a drowned rat, but a happy drowned rat, as he took photos of my exploits, as well as a few others’. Just showers forecast though…

After a tasty catered lunch with lots of companiable car talk, and accompanied by a herd of drying golf umbrellas, I joined my group in the downpour for the collision avoidance exercises. Much like it did for the skidpad, the rain actually enhanced the experience, though the wet instructors might have felt differently, the standing water bringing the car to the adhesion limits quicker and building my confidence that a Porsche, any Porsche, is a master of all conditions when handled wisely and after lots of practice. Doing a slalom between pylons in the wet conditions was quite exhilarating! Hubby’s shoes will dry out sometime this summer, I think…

Finally, the track! I found the Driver Development Track an amazing mix of tight turns, long sweepers, and short straightaways, perfect for letting out the leash on my Cayman, but in a controlled environment. One of two groups of five cars at a time were on the track, the instructors leaping from one group to the next after a few laps, maximizing the track time for each group with military efficiency. Oh, did I mention the rain? The Great Lakes in some of the apexes? The experience included all of that and more; as the rain finally let up near the end of this final session and the lakes drained, my instructor had me speed up more and more until the wall to wall smile on my face could only be matched by the sun starting to peek through the clouds. Perfect.