The Annual UCR Concours d’Elegance and Show & Shine Event on Sunday, September 6 was all about big numbers this year: soaring temperatures and the largest-ever field of participants! It was a big success!

On behalf of my event co-chair, David Forbes and myself, we want to say thank you. Thanks to our sponsors without whom we would not be able to put on such a beau­tiful show; thanks to our volunteers who help make all the little components of such a complex event come together; and not least, thanks to all of the participants who take such great pride in their Porsche cars and keep them in pristine condition, be they 50 years or 5 months old, and shine them up to share their enthusiasm with the rest of us, and this year, suffer through that blazing heat… The UCR Concours is really three shows in one: There is a Peer- Judging competition where every participant choses one car out of each of the 21 classes to win that class. This is an easy-going show and shine event that is less about originality or a hint of brake dust on the wheels, and more about simply picking the one car that stands out in its class for many different reasons. Though most participants are probably pretty tough on others and will judge cars based on originality and presentation as well.

Another is the coveted People’s Choice Award, the win­ner of which is selected by all participants and spectators, young and old, family and friends, Porschephiles or not; it is simply a popularity contest. But, all Porsche enthusiasts being quite discerning, this friendly competition usually does end up being won by one of the class winners of the Peer-Judging competition.

The third is of a more serious nature. For an additional fee, Porsche owners can choose to have their cars judged in the more traditional sense of the Concours d’Elegance. An expert team of judges inspects the cars entered in this class very closely and awards points for condition, origi­nality, and presentation of the Q-Tip cleanliness variety. This category is restricted to three vehicle age groups and only five cars in each one of those, picked from the morning line-up as cars arrive and their owners express the desire to undergo this strict scrutiny. Typically, the car owners witness the judging and will learn more about their cars as this or that issue is pointed out to them where their cars are concerned, culminating in a detailed score sheet that they are presented with after all judging has finished.

As with every annual UCR Concours, there were some surprises this year. Suffice it to say that we are never able to predict just how many cars we will get in each class from year to year and that this makes it virtually impos­sible to lay out the car display field without some last-minute juggling being required as cars arrive. In the past, we have tried pre-registration but Concours participants will typically wait until the last minute to commit, while they keep an eye on the skies. So we have done away with pre-registration and it is cash or cheque at the gate for a very low 20 dollars. This year we had a good showing of 356s, with no fewer than three very rare Speedsters in the mix. Oddly, not one of the six 356s present had been shown at this event over the past few years, while we have had a good number of these cars in the past. Also oddly, there were only two long-hood 911s and 912s present where we had as many as 12 in re­cent years, and there was not one mid-year 911 (1974-1977), where we’ve had as many as six cars in the past. On the other hand, we had quite a number of 964s, which ended up having some difficulty backing up a small hill soaked in morning dew into their designated spots (my apologies to those participants, we’ll fix that for next year), with the exception of a single C4, of course. This year, there was a huge number of 996s present, while there was not even one 914. And one of the greatest sights was the large number of 928s, possibly more than anyone can remember seeing all in one place; I think I counted seven of them.

Our participants are always relaxed and happy to help out while the odd one may haveto move their car as we try to set up all of the cars to be displayed along with others of their type during the morning shuffle; this is a prerequisite for the Peer-Judging competition.

But enough of the hard facts. It was a beautiful car show, as we ended up cutting registration off at 93 participants – 25 more than last year, and the greatest number of cars in the last six years. It was the Labour Day weekend and I’m sure we lost some potential participants due to that but aside from the difficult endeavour of tying down a suitable venue for the event, it is equally difficult to pick a date that doesn’t conflict with other events of this type. In the end, we feel that the date was just fine. And the venue turned out to be fantastic. We had been there two years ago but now, under new ownership, our hosts WUNDEBA treated us to fabulous hospitality and food and refreshments. We hope to make this a regular spot. I have not heard one word of complaint about the event or the venue – it seems that everyone had a  great time. But don’t worry, we’ll improve the registration process to move it along more quickly next year, so that everyone will have the opportunity to have a WUNDEBA breakfast as things get going. All, participants were treated to a goodie bag again this year – the bag was provided by Porsche Cars Canada and contained various sponsors’ literature, but also a small tool from Snap-On Tools Canada, car care samples from JRP-Sonax and an event memento in the shape of an enamelled car grille badge. All that, plus a really fun time for just twenty bucks! 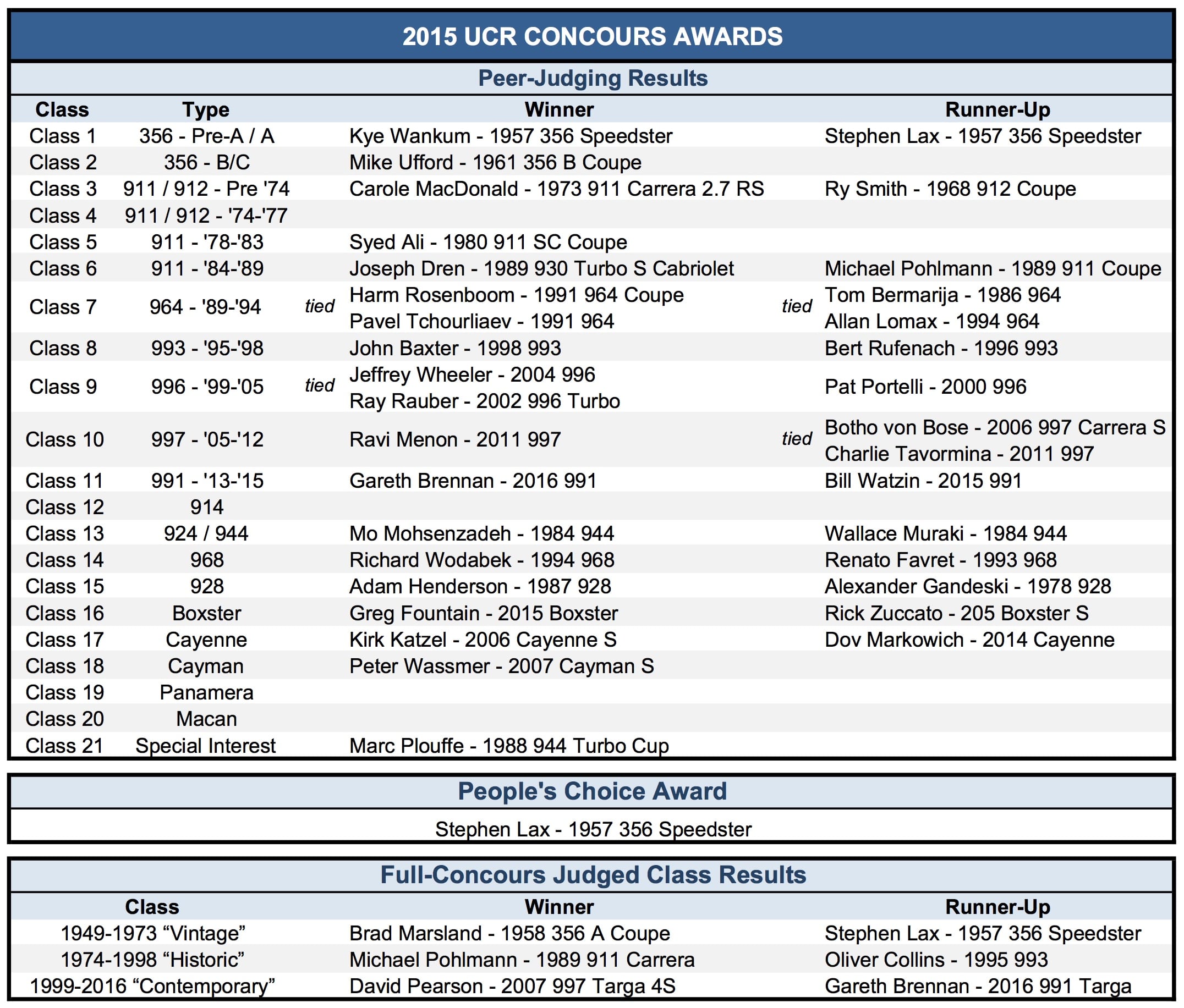