My wife Carolyn and I are still beaming about the great experience we had on October 18, 2015. We benefited from a stellar organizational job by Randy Gananathan and Steve Revoy, wonderful crisp fall weather, a diverse route through rural and semi-rural Ontario, and a hearty meal, with great wine, shared with wonderful new friends at our final destination. It was our second PCA UCR event, ever, having participated in the London to Port Dover Fun Run in September. We’d like to think that we added a little variety to the group with our two-year-old 2014 white Cayman, complemented by some lingering one week old Calabogie track dirt.

Days before the event, Carolyn and I were watching the weather from our home in Eastern Ontario. Should we go? Maybe it’ll be too cold? Will the leaves have fallen? Do we need winter tires?! We finally decided to go for it, however, mostly fed by our addiction to the Weather Network and their sunny, but chilly, forecast. I’m sure we’re not the only couple who can hum their theme song though!

Dawn on Sunday greeted us in our hotel room only 891 meters (approximately!) from the rendezvous point with a layer of frost under grey skies, but a weather forecast that was already hinting at glorious sunshine and a clear blue sky on the horizon. Our decision to go for it was starting to look good indeed! 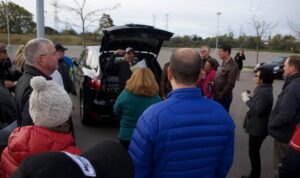 At the rendezvous point, we were greeted with the sight of more than 40 Porsches! Directionally-challenged and map-averse at the best of times, I was happy to receive Randy’s beautifully-produced Ramble Program booklet at the RV, complete with step-by-step instructions that even I could follow. Carolyn pointed out helpfully that maybe our marriage would survive the trip after all. Randy gathered us all together for our safety briefing, reminding us that, given that it was a Ramble, not a Fun Run, we weren’t obligated to stop at any of the suggested pit stops, didn’t need to stay with a group, and that the only important timing was making it to the harvest lunch at 12:30. We were all presented with a lovely bottle of red wine, custom made to commemorate the “Inaugural UCR Fall Coastal Ramble.”

With several members stomping their feet to stay warm and a couple of Cayennes to show the way, we were in the final stages of preparation for our Ramble; odometers reset to zero so we could follow Randy’s kilometer by kilometer and turn by turn instructions. Off we went.

Being a relative neophyte as far as Porsches are concerned, (but learning!), I couldn’t keep track of all the variations on the theme. There was quite a variety of Porsches out there: 944s, 911s, Boxsters, Caymans, and Cayennes. All I remember in detail, with my amateur photographer’s eye, were the colours: silver, black, white, red, yellow and blue. Quite the rainbow of colours heading towards the main road now bathed in light as the grey clouds pulled back and revealed the cobalt blue sky. The Boxsters and Cabriolets wisely kept their tops up to start… Carolyn, ever wise, figured it wouldn’t be long until the tops were down though.

What a wonderful route! The fall colours, resplendent in the golden sunshine, were the perfect complement to the many gleaming Porsches moseying, and occasionally hurtling, along the winding country roads. At least for the first while, we kept fairly closely together and must have made quite a spectacle. A cordial driver of an older Cadillac pulled over to watch our procession. Glimpses, alternating with full views of Lake Ontario, greeted us on seemingly every dip, ascent, and turn. Busy farmers, out working on a Sunday, would wave to the group. Carolyn had to remind me that it wasn’t me to whom they were waving! Along the brief, more built-up area we passed where everyone dutifully slowed down, pedestrians stopped to check the procession and waved us on.

As twisty as the roads were, they presented no challenge to the Porsche convoy until we crossed a rickety old single-lane wooden trestle bridge. We all inched along clickety-clackety-clack at less than 10 km/h – sure glad I didn’t order the PASM option on my Cayman!

What, we’re in Port Hope already? By 10 am or so, the sun was higher overhead but still providing the sort of light that photographers and Porsche drivers live for. At our first stop, we pulled over one by one along Queen Street until our Porsche rainbow lined the sleepy Sunday streets, with still-green, golden, orange, and red leaves, making a perfect back drop as we whipped out our cameras to take photos. Many of us took Randy’s advice and, after picking up our bags of swag from the friendly staff at the Port Hope Visitor Centre, strolled the streets in search of Port Hope’s “Crazy Cookies”, a sinfully delicious mix of chocolate, caramel and pecans with an oozing soft centre. Carolyn went MIA until I found her ordering a latte (but resist­ing a cookie) at the appropriately-named Dreamers Café close to where many of us parked.  Dreaming of the road ahead?

And that road beckoned us to join it again and we heeded its call.

Somewhere, during our next few kilometers, probably as Carolyn was regaling me with stories of her last session on the track near home in Calabogie, we missed the Cobourg stop. But no matter – there was so much more to come. Our route took us closer again to great sweeping views of Lake Ontario and before we knew it, we were at our next semi-scheduled stop.

“Why are we stopping?” I asked Carolyn, who by this time had totally taken the navigation over from her directionally-challenged driver husband. “Photo stop” she said, followed by a form of ribbing reserved only for couples who have a strong relationship… 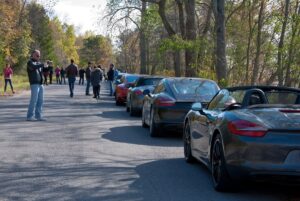 30-40 Porsches lined up one after the other along a country road bordered with trees on one side in full autumn splendour, and a beach on the other, which made a compelling photo op indeed. It was warming up, espe­cially since we were so close to a warm breeze off Lake Ontario, and many a convertible top was lowered as ev­eryone exited their cars and socialized for a few moments. That’s where Carolyn and I met Hazel de Burgh and Martin Tekela. We took a few moments to compare notes with two people even more irretrievably car-crazed than us – two years owning a Porsche and we’re not anywhere in their league yet, ha ha!

Taking Randy and Steve’s Fall Ramble instructions to heart, Carolyn and I stayed for a few moments after the rest of the cars had left and thus lost the group. No mat­ter – this was autumn rambling at its finest! Is it possible to overdose on beautiful scenery I wondered, as we drove in companionable silence toward our final meeting point in Prince Edward County? Eventually, we caught up with a black 911 on Highway 8 and, soon after that, we were joined by more Porsches, including a lovely red 944, before we arrived at our final destination.

Out on the dock, Waupoos Winery, grape vines and our special event big top tent (photo by Warren & Denise Francis) 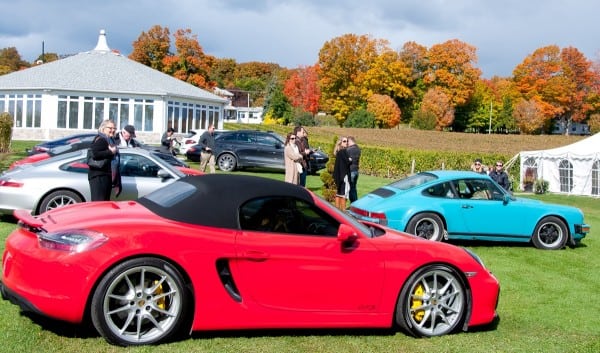 On arriving, we were directed through what seemed to serve as a “secret entrance” and past grape vines planted in neat rows to line after line of beautiful Porsches already drawn up in military precision on the well-manicured lawns of the winery, before backing into a nice spot close to the heated(!) tent where the meal was being served. 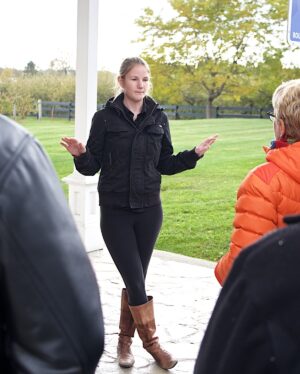 The weather was still chilly, and the clouds only barely held at bay, but the great people we met over lunch, along with piles and piles of splen­did food, chased down with a wee bit of wine, served to warm us up just fine. Cam­era in hand, I abandoned Carolyn, who was talking to another couple while mak­ing zooming gestures with her hands like a fighter pilot, and stalked the subjects of my next photos (cars, cars, cars, and the occasional grape or gourd). By this time, excited as I was by the whole event, I had volun­teered to write this article. 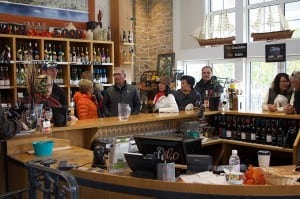 Carolyn joined the (included!) winery tour ducking inside with the group and exploring the cellar before re-emerging at the wine-tasting bar to explore the many lovely vintages Waupoos Winery produces to please almost every palate. Carolyn, having more discerning taste buds than mine, chose a few wines and I found myself playing three-dimensional Tetris to find various cubby-holes to stash the bottles amongst our weekend’s worth of luggage in the Cayman’s two trunks. Carolyn supportively suggested to me that I could abandon some of my luggage in favour of wine if necessary – not hers of course!

Sadly, it was time to go. Living in Eastern Ontario, we were not far from home, so we headed further eastward. A few couples in the group elected to stay overnight in the area and most were making preparations to take one of the carefully drawn-out suggested routes back to Southern Ontario. We shared email addresses and said goodbye to our new friends, already making plans to join the group for a few events next year. This is how fond memories are created.

Is it spring yet?