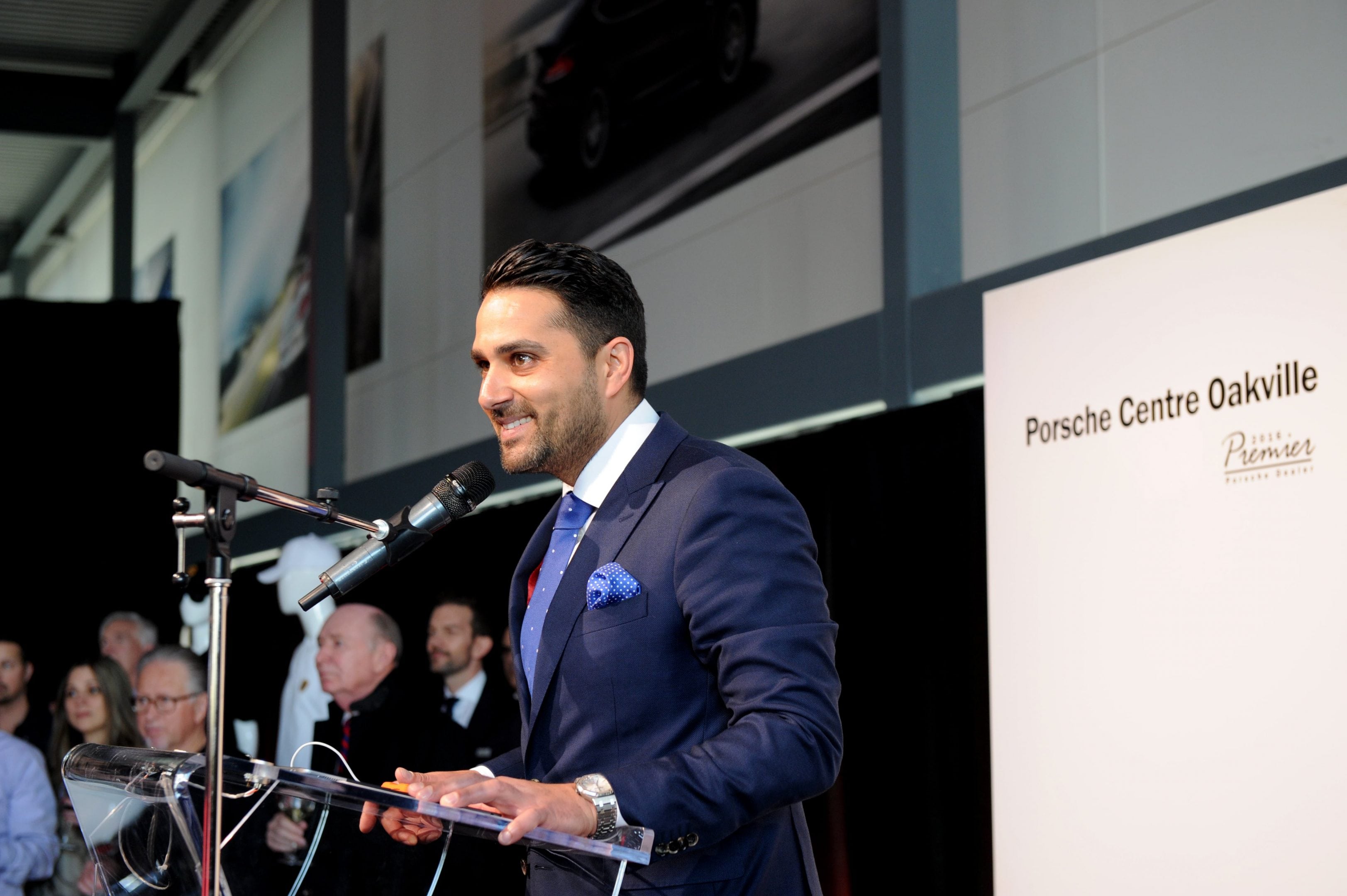 By Mike Bryan, UCR Past President (from December 2016 Provinz page 18)

I first met Francesco Policaro in August, 2013, when Walter Murray and I found him in a hot trailer that was serving as his office on a dry and dusty building site. Construction of Porsche Centre Oakville was near­ing completion and we were able to tour the bare concrete shell as Francesco described with great clarity what each of the many different spaces would look like.

Just two months later, the new Porsche dealership was open and General Manager, Francesco, was graciously hosting nearly 200 of his new best friends from UCR at our Monthly Social in the huge showroom of his magnifi­cent facility.

Fast forward three busy years of tremendous growth and achievement, to another hot August day when I sat down with Francesco, now more comfortably ensconced in his air-conditioned office overlooking the showroom. We had met on many occasions since that first in-trailer encounter, always busily planning or participating in joint activities, but never finding time for me to get to know the man himself. So the purpose of today’s meeting was to do exactly that….

Mike: Tell me about your family background and why auto retailing?

Francesco: My family came to Canada in 1966 and my dad got himself a job in the automotive business He then teamed up with his two younger brothers and started a business venture selling Hondas. They enjoyed some success and when the opportunity came up in 1979 to establish a Honda dealership in Brampton, they pooled their resources and went for it. They set up a business that has grown over the years into the Policaro Automotive Family with seven locations and eight brands.

Mike: What made you decide to follow in your father’s footsteps and what else might you have done if you hadn’t chosen automotive retail?

Francesco: I was just 3 when the Honda dealership opened and I spent a lot of time there as a child. I liked being there with the cars and the people and as I grew up, it became part of my lifestyle. So I just grew into the busi­ness and never considered any other options. So it wasn’t so much a conscious choice on my part. In fact, you might say the car business chose me.

Mike: OK, but at some point you must have thought about what else you might do if you weren’t doing this?

Francesco: Well, I’m a business guy and sales and marketing is what I like doing. I suppose the skills I’ve acquired would make it possible for me to work in a dif­ferent business, but it would have to be something that I could be passionate about. I’m so lucky to have grown up in a business I really love and I can assure you I’m in this for the long haul.

Mike: Since those early beginnings the Policaro Au­tomotive Family had become well-established in the Brampton area with Honda, Acura, Toyota, Lexus, Hyundai and BMW dealerships. What did you think when you learned that the business had secured the Porsche franchise in Oakville?

Francesco: I was working in business development at the time, keeping in tune with the industry and always on the lookout for potential opportunities. I learned that Porsche Cars Canada was looking for a partner to estab­lish a dealership in Oakville and I thought this might be an opportunity worth pursuing. So I did my home­work and talked it through with the family, who then asked me to put together a proposal for presentation to Porsche. Having been with the idea right from the start and having turned it into a project and a goal, I can’t tell you how thrilled I was when we made the deal and set about creating Porsche Centre Oakville.

Mike: What do you like most about your job?

Francesco: Just walking into the dealership every day and seeing the vision realized. I also love the challenge of not only maintaining the standard we’ve achieved as a Porsche Premier Dealer, but in still finding ways to im­prove. It’s a joy to work with such a great bunch of people who “get it” and share the same drive for excellence in everything we do to achieve the highest levels of customer satisfaction.

Mike: You clearly love your job, but I imagine it could be all-consuming. Do you manage to fit any other interests into your busy life?

Francesco: Yes, as passionate as I am about my work and our mission, I know that balance is essential. There is nothing more important to me than my family and I spend as much time as I can with my beautiful wife, Na­tasha, and my two children who are eight and five. In fact, I’ll be leaving soon to take my son to soccer practice. It’s great exercise and teamwork for him and nice relaxation for me.

Much as I love living in Oakville and have become ac­tive in the local community, I do like to get away with my family from time to time, particularly to escape the cold in winter. This year I turned 40 and thought it was time to show my kids their roots, so we went off to Italy and had a wonderful time visiting family and the places where my parents grew up.

Mike: I think I’ve seen your eyes light up when the con­versation turns to racing. Are you a racer yourself?

Francesco: No, I’m not a racer, but I do like to drive at the track and to work on my skills behind the wheel. My interest in racing is what led us into a partnership with Alegra Motorsports to run in the Porsche GT3 Cup Challenge Series. We’re enjoying another great year and are aiming to win both the team and driver cham­pionships. (Mike’s note: They did. Congratulations!)

Mike: So what does the future hold for Francesco Policaro?

Francesco: I’m committed to the success of Porsche Centre Oakville and continuing the growth of our family business. As the Policaro Automotive Family expands, I look forward to completing the smooth transition from my father’s generation and to facing the exciting challenges that advanced technology will bring, not only in the vehicles themselves, but in consumers’ changing needs. On a personal level, I never lose sight of my goals to become a better person, father and businessman – that’s what will always drive me on.

Mike: It’s been a pleasure to see Porsche Centre Oakville grow so strongly over the last three years and, if I may say so, to see you grow, too. Thank you for sharing your personal thoughts and giving us some insight into the passion and leadership with which you have created this successful business.

Previous articleI AM THE NEW RSR
Next articleMOOCHING IN MONACO

Pounce! Getting Back on Track