Despite a morning rush hour storm that dropped upwards of 10 cm of snow, over 50 Upper Canada Region members and guests braved the elements to attend the first Social of the Club’s 40th Anniversary year.  The elegant Islington Golf Club served up a tasty ‘Hip of Beef’ with salmon offered as an alter­native to those that requested it.

After dinner, President Mike Bryan started with some Club announcements: he talked about UCR’s decision to use ClubRegistration.net as the registration tool for all UCR events except Driver Educa­tion.  UCR will continue to educate its members on how to set up their own “ClubReg” accounts.  Importantly, the user ID and Password for your ClubReg account may be different than your DE or PCA accounts.

The highlight of the evening though was a “fireside chat” discussion hosted by Mike Bryan.  Mike did a great job of “interviewing” five of the seven UCR Past Presi­dents who attended the event.  These included founding President Geoff McCord (1976), Phil White (1991), Gord McNeil (1994), Botho von Bose (1996) and John Van Atter (1999).

Geoff McCord kicked off the discussion by telling us how the Club was formed.  The initial UCR PCA Charter required 25 local members and was createdafter Geoff realized that there were enough Canadians attending PCA Niagara Region (NY State) events to start a Canadian club.  Well before the era of social media, UCR developed a yellow “Parking Ticket” facsimile which members placed under the windshield wipers of prospective Porsches/UCR members.  That clever idea certainly helped to grow UCR’s membership.  This con­cept was used again in the mid to late 2000’s in the form of a postcard describing upcoming UCR activities and membership information.  Since then, UCR has grown to become the single largest North American region in the PCA and continues to win awards for its growth. 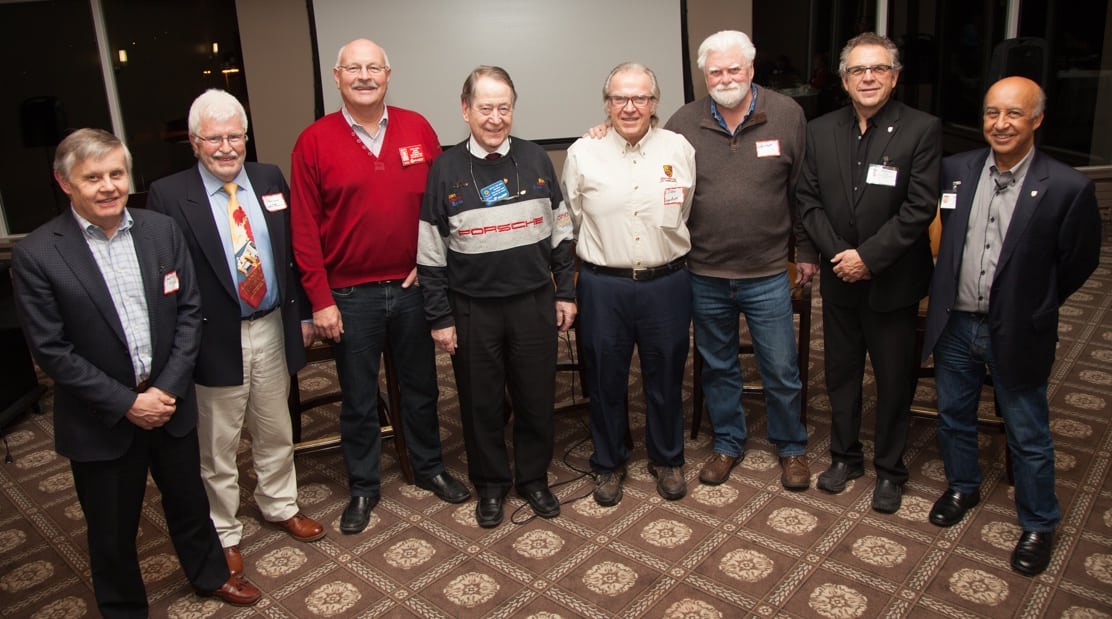 Every Past President mentioned their friendships as being the most important benefit they enjoyed by becoming UCR members, and they all reinforced the point that “it’s about the people, not just the cars”.

After a most enjoyable hour hearing about the adventurous spirit and mischievousness of some of UCR’s executive, Past Presidents Peter Helston (2002) and Martin Tekela (2009/2010) came up to join Mike Bryan and our guest speakers for a group photo.  There have been 32 Club Presidents over UCR’s 40-year history and 25 are still (mostly) active members today.

What a great start to UCR’s 40th year!