President Walter Murray introduced Gerd Schwarzkopf, who joined PCA-UCR in 1961, 15 years before PCA-UCR received its Charter in September 1976. Gerd told the audience there were only 30 members when he joined, and it is amazing how our club has grown to 3,400 members today. Walter presented Porsche pins to two new members—Louis Kovacs and Richard Metcalfe, and two members who attended our social event for the first time–Colin Barfoot and Michael Meredith.

The first half of Jay’s talk focused on Steve McQueen’s filming of the 1971 movie “Le Mans”, which is considered by those with gasoline in their veins as the best racing motion picture ever filmed. The slate gray 1970 Porsche 911S (a two litre flat-six) that Steve McQueen drove in the opening scene of “Le Mans” sold for US$1.375 million at the RM auction in August 2011. During the filming of “Le Mans”, Steve McQueen insisted on doing his own driving of the Gulf colour 1969 Porsche 917K at true speed (about 225mph) to create the most realistic car racing movie. This car is scheduled to go under the hammer at Gooding & Co. in August 2014, and it’s thought it could fetch more than US$15 million. The Porsche 917 is the race car that gave Porsche its first overall wins at Le Mans in 1970 and 1971. 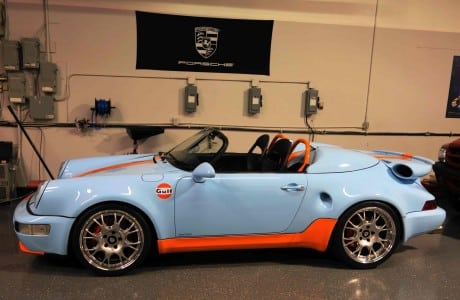 Jay then focused on the building of a Gulf-themed original Porsche Speedster, dedicated to the wonderful relationship between Gulf and Porsche in those awesome years. The car belongs to Henry Au, a 15+ year PCA-UCR member. This was a 36-month project Jay started from scratch with a 1994 Speedster shell. He had to change every single nut and bolt in the car, as well as the complete wiring harness. The Gulf Speedster is fitted with a modified 3.8-litre twin-turbocharged engine producing hopefully 650 hp but it weighs only 1,100 kg! The car was built to perfection. Henry plans to bring the Gulf Speedster to display at the paddock for people to enjoy during the Can/Am Challenge weekend at Canadian Tire Motorsport Park on August 8 to 10, 2014. 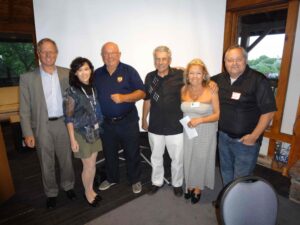 Our second speaker of the evening was David Browne from Martin, Merry and Reid Insurance Company, sponsor of the Street Survival School. David indicated the Ontario government requested a 15 percent reduction in auto insurance, and insurance companies can help achieve the objective by offering usage-based plans. Telematics is an onboard device that monitors drivers’ habits such as hard braking, rapid acceleration etc. Drivers with good driving habits will be entitled to a five to 25 percent discount on auto insurance.

Rick Bye was the final speaker of the evening. Rick is a 30-year veteran of professional motorsports. His past victories include races and championships at the NASCAR Busch Grand National Series, the Daytona Rolex 24, D.I.R.T. Modified Stock Car Championship, Firestone Firehawk Endurance Championship, and Rothman’s Turbo Cup. From 1990 to 1994, Rick was among the top 15 Porsche racers worldwide in the Porsche Cup Championship.

In 1998, Rick survived a catastrophic brain injury from an accident on a North Carolina highway when he was hauling his Mustang race car to Daytona. He went from a coma to long-term rehab to back behind the wheel as one of the most sought-after high performance driving instructors in North America. Rick was instrumental in establishing the Porsche Advanced Driving School. Rick is currently the President and Driving Coach of Kidney Stone Racing, and he is also the ambassador of Downtown Porsche.

Rick is currently involved in helping the underprivileged to fulfil their dreams of driving race cars on the track. A unique event, probably the first event of its kind worldwide, called Performance Driving Experience was held at Canadian Tire Motorsport Park on July 2, 2014. Rick Bye was one of the professional driving instructors at the event coaching participants with acquired brain injury, spinal cord injury, neurological disorders and visual impairment. This event gave these people the opportunity to drive a real racetrack prepared car.

Brian Donato was a top-flight skiing instructor and the Director of Sports at Hockley Valley Resort until he suffered a catastrophic accident in 2010. Brian is a paraplegic and he has been learning how to drive a hand-controlled car with Rick. He’s now qualified to race Targa Newfoundland (a 2,000 km course) on September 14-19, 2014. We wish Brian and Rick the best of luck.

At the end of the evening, Walter Murray and Dagmar Ruehl-Pegg gave out draw prizes to the following lucky