Photos courtesy of Pfaff Porsche except where credited

The weather gods parted the skies for us on this glorious evening. Competing with the sunshine was the gleam of all types of Porsche cars, both old and new. It’s really something to see an older Porsche in pristine condition next to a brand new one just delivered from the factory. The subtle differences and similarities from one model to the next are amazing to see first-hand.

As always, Pfaff was a gracious host, with general manager Dave Sambrook on hand to welcome UCR members. All the many members who showed up were treated to the beauty of the cars and the hospitality of the dealership. President Walter Murray and UCR event organizer, Steve Revoy spoke about the last DE event and the charity day at CTMP (Mosport). At the June 7th charity day over 500 rides were given to participants both young and old.

The social included a draw for some awesome prizes and many walked away with great stuff. One lucky member won a Pfaff day at the track! Dave even exchanged a prize for one member who had her eye on something that had already been given away.

All in all, it was a great evening with lots of great people… oh yes, and cars too. 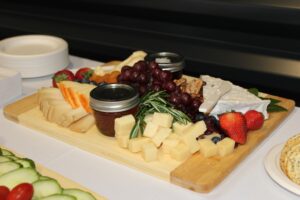 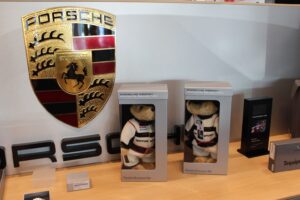